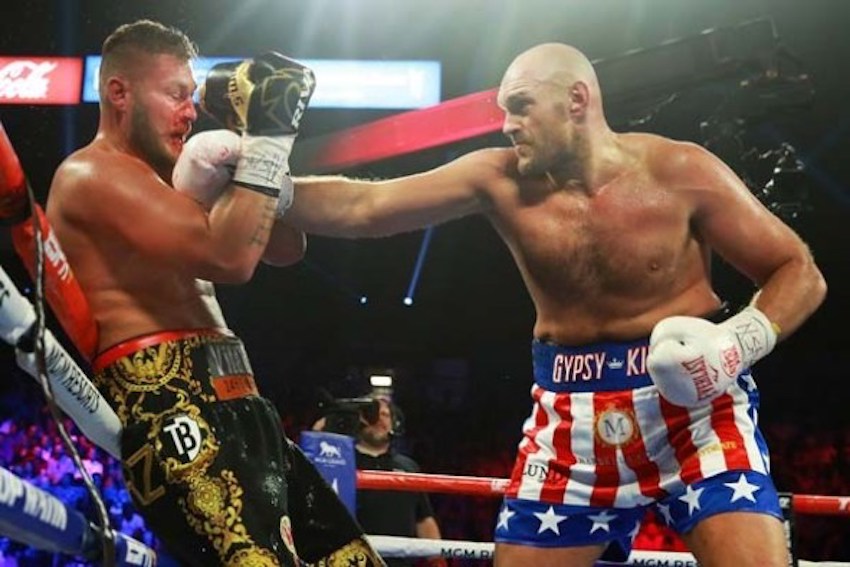 The opponent was underwhelming but the performance was certainly not from the Heavyweight ‘Lineal’ champion Tyson Fury who needed only two rounds to stop Tom Schwarz at the MGM Grand in Las Vegas on Saturday night.

Stepping into the ring dressed in the ring attire of Apollo Creed from the movie Rocky, the ‘Gypsy King’ draped in the colours of the American flag, sought out to put on a performance that would serve to further enrich his profile to an American audience, mission accomplished.

Sensing that Schwarz offered very little in terms of danger, Fury used his jab in round one to put Schwarz on the back foot. switching stances to further confuse an already out of his depth opponent.

A combination in round two brought blood to the nose of Schwarz before a series of powerful straight hands dropped him against the ropes, he beat the count but the writing was already on the wall as far his challenge was concerned, Fury capitalised on the moment by landing more heavy artillery until the referee and the corner of Schwarz decided enough was enough.

It was a performance of brilliance from Fury who topped it off with a rendition of an Aerosmith song aimed towards his wife Paris in the Post-fight Interview.

“The key was to enjoy myself,” Fury said afterwards. “I used the jab. I was slipping [punches] with my hands down and sliding and shifted to southpaw, and I caught him with a straight left. It was a good shot. It would have put anybody away.”

Fury came into the bout a little heavier than in his last contest with Deontay Wilder but still looked light on his feet.

“I put on an extra [seven] pounds. I really feel it,” Fury said. “This time I had a few malts out of the ring. But I came here to put on a show for Las Vegas and I hope everyone enjoyed it as much as I did.”

“That was amazing,” stated promoter Bob Arum. “Tyson Fury is a force of nature. This was one of the great shows I’ve ever seen and not just because of the boxing. He’s an entertainer. He is truly unique…Now that he’s in shape, he can knock out every heavyweight in the world.

“I haven’t seen a fighter with that much charisma since Muhammad Ali.”