By @JayTB__ – A monster inside and outside the ring, Carlos Monzón was one of the dominant middleweight fighters in the history of the 160lbs division, and certainly the most accomplished South American boxer of all-time. His pugilistic achievements were unfortunately overshadowed by his demonic behaviour outside of the squared-circle. This is the story of Carlos Roque Monzón.

He grew up in the deprived town of San Javier in the Santa Fe province in Argentina, where he shared a home with his parents and four siblings. After dropping out of school in the third grade he was forced to work in order to support his family financially.

Whilst working as a newspaper delivery boy and milkman, Monzón realised he could earn money through the art of fighting. From an early age, he was involved in backstreet bouts, earning up to 50 pesos for a victory. This is where he developed his love for fighting and decided to delve into the amateur game, where he eventually crossed paths with Amilcar Brusa, the man who became his lifelong trainer and a trusted companion.

At age 20 and standing at six feet tall, Monzón turned over to the paid ranks where he campaigned in the Middleweight division. Despite still finding his feet and adapting to the professional game, he fought an impressive 19 times in his first two years, losing on just 3 occasions. No one expected that these 3 early defeats would become the only blemishes on his record at the end of his career.

In the first 24 months, he steadily built a reputation and attracted fight promoter Juan Carlos ‘Tito’ Lectura, who looked to take “Escopeta” (Spanish for Shotgun) out of the slums and place him under the bright lights of Buenos Aires’ famous Luna Park Stadium.

Despite struggling in his initial years as a pro, Monzón earned respect with some fine victories in nationally televised bouts. As a result of his hard work, he was presented with the opportunity to fight the highly-touted Argentinian Champion, Jorge Fernandez. Despite being the underdog, the challenger rose to the occasion and claimed a unanimous decision victory.

Now considered the top 160lbs contender in South America, he continued his steady progression towards a world title shot, which eventually came against Nino Benvenuti.

Having never competed outside of his native South America, he was forced to travel over to Rome, Italy, for his dream matchup.

The fight was a contest between two contrasting personalities. The Italian was recognised across the world as not only a world-class fighter but also as a movie star. His face could be often found on billboards in the city of Buenos Aires. Carlos was the opposite: quiet and unassuming, people in his home country wouldn’t recognise him if he walked down the street.

Neither fans nor media could foresee an outcome other than a successful defence for Benvenuti, as they believed that Monzón lacked the ability to break down the seasoned Champion. 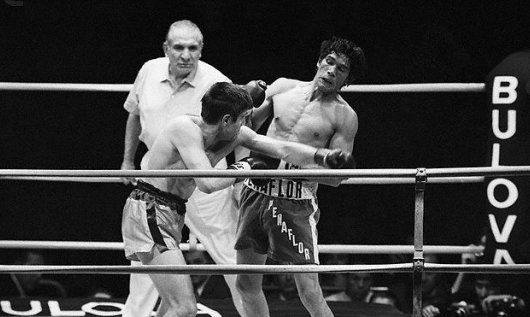 They couldn’t be more wrong, though, as Monzón’s bombs were precise and damaging. The Italian was made to miss from the offset and failed to inflict any damage on the challenger. The fight ended with one of the most memorable knockouts in boxing history, as the challenger’s right fist brutally connected with the chin of the champion, bringing the fight to an end in the twelfth round.

The Middleweight division had a new king and his name was Carlos Monzón. Benvenuti would get the chance 6 months later to avenge his loss, but the newly-crowned champion made even quicker work of the European this time around – stopping him inside three rounds. The Argentine would go on to successfully defend his belts 14 times, an accomplishment never achieved before in the history of the 160lbs division. Amongst the defences came future hall-of-fame opponents Emile Griffith and José Nápoles.

Although his style was neither eye-catching nor spectacular, Monzón ruled the division for 6 years, defeating all the top contenders along the way. He possessed a basic skill-set but his lanky physique, granite chin, and destructive punch power made his style extremely effective. Opponents were often overwhelmed by his strength and frustrated by a relentless front-foot approach.

His historic championship reign came to an end in 1977 after a gruelling second encounter with Rodrigo Valdez. He claimed a unanimous decision victory, but after being battered and bruised, Monzón acknowledged his abilities were slowly starting to decline and rightfully decided it was time to walk away from the sport he adored.

He finished his career with a record of 87 Wins, 10 Draws and 3 Losses and he was recognised as a celebrity back in his home nation of Argentina.

Like many athletes who grow up in violent and less-fortunate backgrounds, the boxer lacked the ability to conduct himself properly with the pressures of fame and fortune hanging over him. In his early years, he served brief stints in prisons for a number of different violent acts. But boxing served as an outlet for his inherent aggression and kept him out of trouble whilst active. Once retired though, the aggression began to spill into his personal life. Rumours had been prominent throughout his career that he was abusive towards women, which explained why he was shot twice by his first wife back in 1973. Known for being a violent drunk, alcohol often exacerbated his uncontrollable fits of rage. His mistreatment of women didn’t seem to harm his popularity though, with many still attracted to him and eager to be associated with the former Middleweight king.

He also starred in movies during the height of his boxing career, which propelled his image and caused Argentina to become infatuated with the affair between him and the country’s most famous actress Susana Giménez. They first starred in the movie, La Mary together in 1974 and their affair continued right through until the end of Monzón’s boxing career in 1977. The actress would often appear on national TV with evidence of domestic violence displayed on her face. The pair slowly drifted apart and her relationship with singer and actor, Cacho Castaña spelt the end of the love affair.

A year after the split, Monzón would meet the woman who became his second wife and mother to his child, Alicia Muñíz. This spelt the beginning of the madness that would define Carlos Monzón as a man. After separating for a short while, the pair were away together in a condo in the early hours of February 14, 1988, when an argument led to the former world champion strangling his wife to death, before throwing her off a second-floor balcony. He was sentenced to 11 years in prison for murder.

The Middleweight great would serve six years of his sentence before losing his own life in a car accident, whilst on a day’s leave of absence from prison; a reward for his good behaviour. On his way back to the facility, he lost control of the vehicle and it rolled over several times. He was pronounced dead at the scene on the evening of January 8th, 1995.

There was a mixed reaction across Argentina to the news of his death. Although many viewed him as a coward for the crime that he had committed, he was still accepted for being a warrior inside the ring and one of the greatest Middleweight fighters of all-time.

It is always sad when a man loses their way, especially when they are extremely skilled in their chosen field. Love him or hate him, boxing will always remember the name: Carlos Roque Monzón.

0 comments on “THE LIFE AND TIMES OF CARLOS MONZÓN”