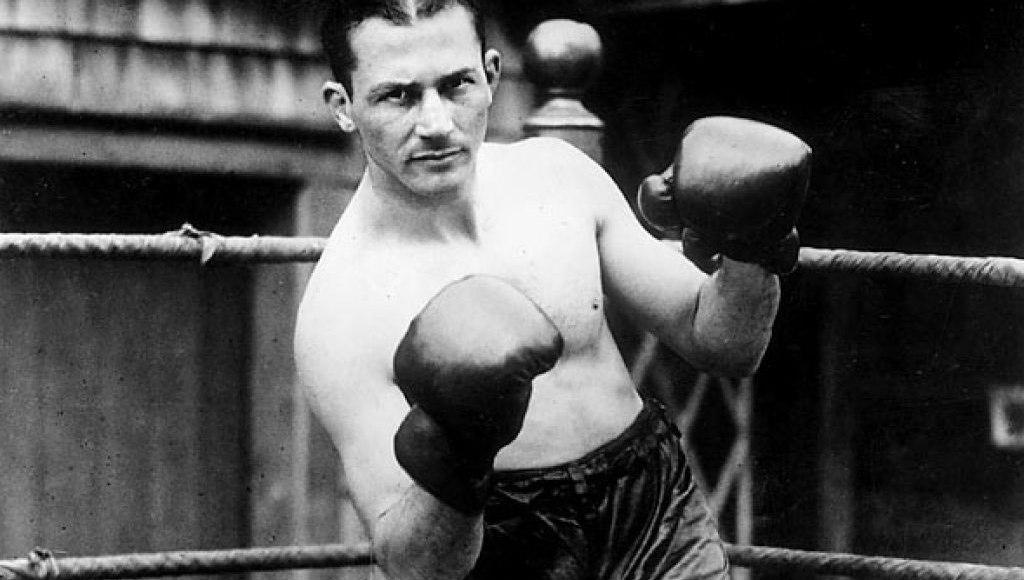 By Steve Haigh – Benny Leonard (born Benjamin Leiner) the son of Orthodox Jews grew up in the rough and tumble lower east side neighbourhood of New York City.

Forced to learn how to fight early owing to bands of Irish and Italian youths who on their way to the neighbourhood public baths targeted jews, Leonard quickly became a talented street fighter.

He was taught by his uncles, Max and Joe Dornholz, to fight with his fists rather than with pipes, bats, and chains, which the other street kids used so that he would be able to defend himself under all circumstances.

At the age of 11, Leonard was brought by his uncles to the silver heel club where he laced up boxing gloves for the first time and began competing in bootleg fights. It is estimated he took part in 100-125 of these fights, often winning no more than the three dimes he used to buy hot dogs and ice cream for his cornermen.

He fought his first professional fight in 1911 against Mickey Finnegan, although he lost the fight, the 5’5″ Leonard began a storied career that spanned over 20 years, approximately 217 fights and 70 kos.

Fighting as a lightweight, “Leonard developed a fast, quick, colourful style that was effective on the offensive and defensive front.” His style was described as scientific and extremely defensive, meaning that he could avoid getting the kinds of bruises and cuts that would give away his newfound career to his disapproving parents.

Over the next several years, he fought a who’s who of fighters and the competition became increasingly tough. In 1916 he fought the first fight of what would become a rubber match against Welshman Freddie Welsh ending with the 9th round knockout of his opponent.on May 28,

On May 28, 1917, in which he captured the lightweight title, Incredibly Welsh protested the decision because the referee stopped the fight after Leonard had rendered him unconscious rather than counting out the downed fighter.

Leonard fought dozens of fights over the next 7 1/2 years, retaining his title throughout and becoming a hero to America’s Jewish community.

During these years he lost only one fight after he was disqualified for hitting Welterweight Jack Britton when he was down in the 13th round. This, however, was not a title fight, so he retained his lightweight belt, making him history’s longest reigning lightweight champion.

At the insistence of his ill, mother Leonard retired from boxing on January 15, 1925, after making millions of dollars from boxing.

Leonard came out of retirement in 1931 after losing his fortune in the stock market crash of 1929. He won the first nineteen fights of his comeback, but in his last outing was knocked out in the 6th round by Jimmy Mclarnin, who was the only fighter to have ever knocked down the great Jewish boxer, Barney Ross.

By the 1940s Leonard had begun refereeing boxing matches. On April 18, 1947, he died of a heart attack in the ring during a bout which he was officiating.