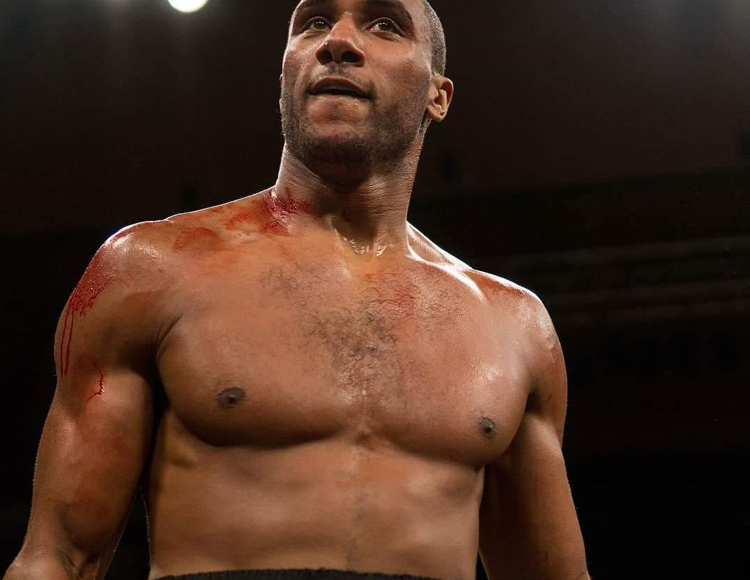 By Karl Ritchie – In a world of boxing that is now under the ever-growing watchful eye of the public, with so many channels on television covering fight nights alongside live stream channels used on the likes of Youtube and Facebook, not mentioning the interaction between fighters and fans on social media. Hidden gems are becoming harder to pick out before the boxer themselves are well known to the fans. Although many talented fighters will be well known in the boxing community long before they’re unearthed by fans, promoters or TV channels. Currently, Lawrence Osueke is one of those hidden gems, but not for long.

Osueke will be contesting in his 3rd professional fight in only a 3-month window on June 16th at the Metro Arena, Newcastle. On the undercard of a joint top bill shared by local lads Josh Kelly and Lewis Ritson live on Sky Sports. Osueke a GB Podium boxer as an amateur, was in the squad alongside the likes of Heavyweight Joe Joyce, Super Welterweight Anthony Fowler and Welterweight Josh Kelly while also spending time in a squad with now unified Heavyweight world champion Anthony Joshua shortly before he turned pro.

Osueke told me “I came into boxing quite late, I didn’t start boxing until I was about 19 year old so when it came to tournaments I didn’t really want to hang around. I didn’t fight for junior titles I went straight into the senior tournaments and in my first year made it to the final of the ABA’S, unfortunately, I didn’t win but a year later I was in the ABA’S again, made it to the final and this time won it. I got into the GB squad and travelled the world with them, fought in the European championships and in multinational tournaments as well.”

When asked if seeing his former GB squad mates doing so well for themselves gives him that extra bit hunger he replied “Of course. I want to push on and get to the same heights these lads have, that’s the aim”

Osueke has now moved away from his home in the North East and went into full time training so that he can fully focus on his boxing career and maximise his chances of making it to the top. He is now based in Salford and trains at Oliver’s gym under the tuition of well-established trainer Oliver Harrison who in his time has trained such fighters as Martin Murray, Amir Khan and Rocky Fielding. Osueke had recently uploaded a photo of himself alongside Rocky and Martin on his Instagram that stated “Great session this morning. Top sparring with Rocky Fielding.”

When I asked how camp had gone and how he found sparring with Rocky he replied “I’ve more so just been keeping in the gym between fights so it’s been continuous really. I had 2 days out after my last fight and then got straight back in the gym. Yeah it’s been brilliant, it went really well, Rocky’s obviously a top operator and he’s now got himself into a position to fight for a world title so in terms of sparring prep, it doesn’t come much better than that for me. I fought Rocky in the amateurs twice and beat him both times, one of them in a quarter-final. The Pro game is totally different to the amateurs though and Rocky has developed brilliantly.”

Although he has moved down to Salford, Osueke still comes home on a weekend but admits that it can be costly with paying for digs down in Salford, spending money on training and nutrition with petrol money also thrown in there for the journey from one side of the North to the other. It all adds up and Lawrence is openly looking for sponsors to help fund his training camps.

With a record of 2-0, he is keen to get his teeth into this year and press on. A win on Saturday on a Matchroom card at the Metro Arena in front of a home crowd would certainly get the ball rolling. Given his amateur pedigree, I’m sure Eddie Hearn will be keeping tabs on Osueke. Although stating he would’ve liked a 6 rounder he said “Its another 4 rounder. With it being a Matchroom show there are times that they have to follow with it being live on Sky but I’m happy with another 4 rounder and to be on a Matchroom show at the Metro Arena is great.”

An opponent still to be announced after the last man who was lined up to face him on June 16th now won’t be. I tried my luck and asked if, without overlooking his fight on Saturday, there were any opponents domestically that he’d like to fight. God loves a trier. I already sort of expected the answer Osueke gave me. “I’m not really focused on specific fighters right now I’m just trying to keep active and whoever my management put in front of me that’s who I’ll fight. I know in time the title fights will come and they’ll come at the right time for me.” This showing that he is level-headed yet confident alongside it, classy.

I closed the last stages of the interview with the types of questions every fan likes to ask. What is the dream for Lawrence Osueke? To which he told me “Well when I first started boxing I didn’t think that far ahead, I was late coming into the game but once I started winning amateur titles and got into the GB squad and realised my potential I started to take things more seriously. So yeah, pro now and the dream is the same as it was back then, to win a world title.”

“Favourite fighter of past times is a hard one. I’d have to say Muhammed Ali not only was he a great in the ring but also a great role model outside of the ring, he had lots going on in his life and he stood up for his beliefs and fought for his people, for that I really admired him, not mentioning his achievements in the ring. My current favourite active fighter would have to be Lomachenko. I’ve seen him at tournaments while in the amateurs and he’s a class act, virtually untouchable. Now in the pro ranks and to have won 3 world titles in so little amount of fights just goes to show the level this guy is at. His movement and technique are on a different level.”

Lawrence Osueke will likely be one of, if not the first fighter on the card come Saturday, doors open at 4:30pm and first bell is 5pm. Geordies, get there early, get behind your own, this lad is certainly one to watch out for and as said above is a hidden gem but not for long. I feel big things over the horizon for Osueke and wait eagerly to see how fast he progresses in the pro ranks. I’d like to personally thank Lawrence for his time in what I believe has been a hectic week for him while getting tickets to people as well as training in between. Wishing him well in his fight on Saturday, June 16th. God bless Lawrence and every fighter that cross them ropes.