Is it a Bird, Is it a Plane, No, Its ‘Superman’ Roy Jones Jr, were the words uttered from the hair-raising promoter Don King after witnessing another masterclass from the Pensacola resident.

Pulling at the fibres of being superhuman, Roy’s career was for the most part full to bursting with superlatives from all walks of life, winning six world titles in four weight classes will do that, but what goes up, must eventually come down, the last decade not being as kind, father time winning the race as his star faded.

So if you are new to the boxing world or more specifically if you have only started watching more intently the last 15 years, let me be the first to say, you guys really missed out.

Don’t worry I feel the same emotion whenever the more senior generation talk of Muhammad Ali or maybe even going further back in raving about the great Sugar Ray Robinson, the jealousy felt is possibly replicated when talking to me about Roy.

In his prime, Roy was spell bounding, electric, almost time bending in the way in which is seen only in the Matrix movies. His quickness of feet/hands mixed with cat-like reflexes was a puzzle which was unsolvable to most in the prime years of his career.

It is those years which I often reflect upon, neglecting the fighter that fought on past his prime, I would instead rather think back upon The fighter who outfoxed the great James Toney, the one who outpointed Bernard Hopkins with a fracture to his hand or the body shot that hit Mike McCallum’s abdomen like a shot from a 50 caliber sniper rifle, there are just too many to name.

He was so good he often looked like a fighter bored with the one-sided nature of the contest, instead he prolonged the beating by entertaining with dance moves, a brief talk to ringside or even in the case of Glenn Kelly, putting his hands behind his back, avoiding a combination before a cuffing shot dropped the Australian for the count.

This past weekend he finally succumbed to the calls to quit, going out on a high with a decision win over Simon Sigmon, fittingly in his hometown of Pensacola, Florida, putting the exclamation mark to his hall of fame career.

The rise to the top…

Born on January 19th in 1969, Roy took up boxing from an early age, made to endure a treacherous time before his eventual ascent to the top of the sport, his father ‘Big Roy’ was a Vietnam veteran who was a harsh disciplinarian who would eventually beat the greatness out of his son.

Roy Senior would often take a PVC pipe to Junior if what he witnessed was not of a high standard which was more often than not due to the high expectation of him, Roy stated in a later interview ‘After a while I didn’t care about getting hurt or dying anymore.

‘I was in pain every day. I was so scared of my father. He’d pull up in his truck and start looking for something I’d done wrong. There was no escape, no excuse, no way out of nothing. Every day it was the same: school, homework, farm work, training. Getting hurt or dying might’ve been better than the life I was living.

‘So I turned into a daredevil. I’d do anything. Didn’t make much difference. Used to think about killing myself anyway.’

Arguments between himself and his father continued for the years that followed, before the inevitable split. It was an incident revolving around his father killing his friends dog that led to the straw that broke the camels back, the dog had bitten his sister but after witnessing his father shoot the dog in cold blood with a shotgun as well as a Glock 9mm handgun, it was enough for Jnr and senior to go their separate ways.

Roy by this time had already built up a relationship with Alton Merkerson, the man tasked with taking the place of his father, Merkerson was his trainer at the Seoul Games that Roy had taken silver after being robbed of the top spot of the podium by South Korea’s Park Si-Hun.

Jones’ career thereafter took off as predicted, winning the middleweight title against the future undisputed middleweight king Bernard Hopkins in his twenty-second professional contest before loosening the grip of the Super Middleweight title from James Toney on his way to setting his sights on new horizons at Light Heavyweight.

Jones was now the name on everyone’s pound 4-pound listings, lifting the vacant crown from Mike McCallum before suffering his first career loss which came via disqualification.

Jones was handily beating Montell Griffin before a shot dropped Griffin to one knee, Jones sensing an ending landed another which we now know was an illegal shot, Jones later said that he “wasn’t sure (Griffin) was down. I didn’t have time to think and see whether he was down. I thought he was down and he might come back at me. I wasn’t looking at his knees. I was looking at his face.”

Just like that, Jones had lost his perfect record, WBC title and his status as boxing’s pound 4 pound best, all of which didn’t sit well with Roy who promised redemption in the rematch.

The scene was set for the Foxwoods Resort in Mashantucket, Connecticut, on August 7, 1997, Jones in a rush to prove his point, wasted little time in landing a scintillating left hook which dropped Griffin at the 20 second mark before a half hook/half uppercut sealed the deal, Griffin trying in vain to get to his feet fell backwards to signal an end to the contest and the debate.

Roy took the WBA title from Lou Del Valle in 1998 before picking up the IBF to go along with the collection in beating Reggie Johnson, Roy was ‘Mr Untouchable’  beating the likes of Virgil Hill, David Telasco, Julio Cesar Gonzalez and Britain’s Clinton Woods amongst others. 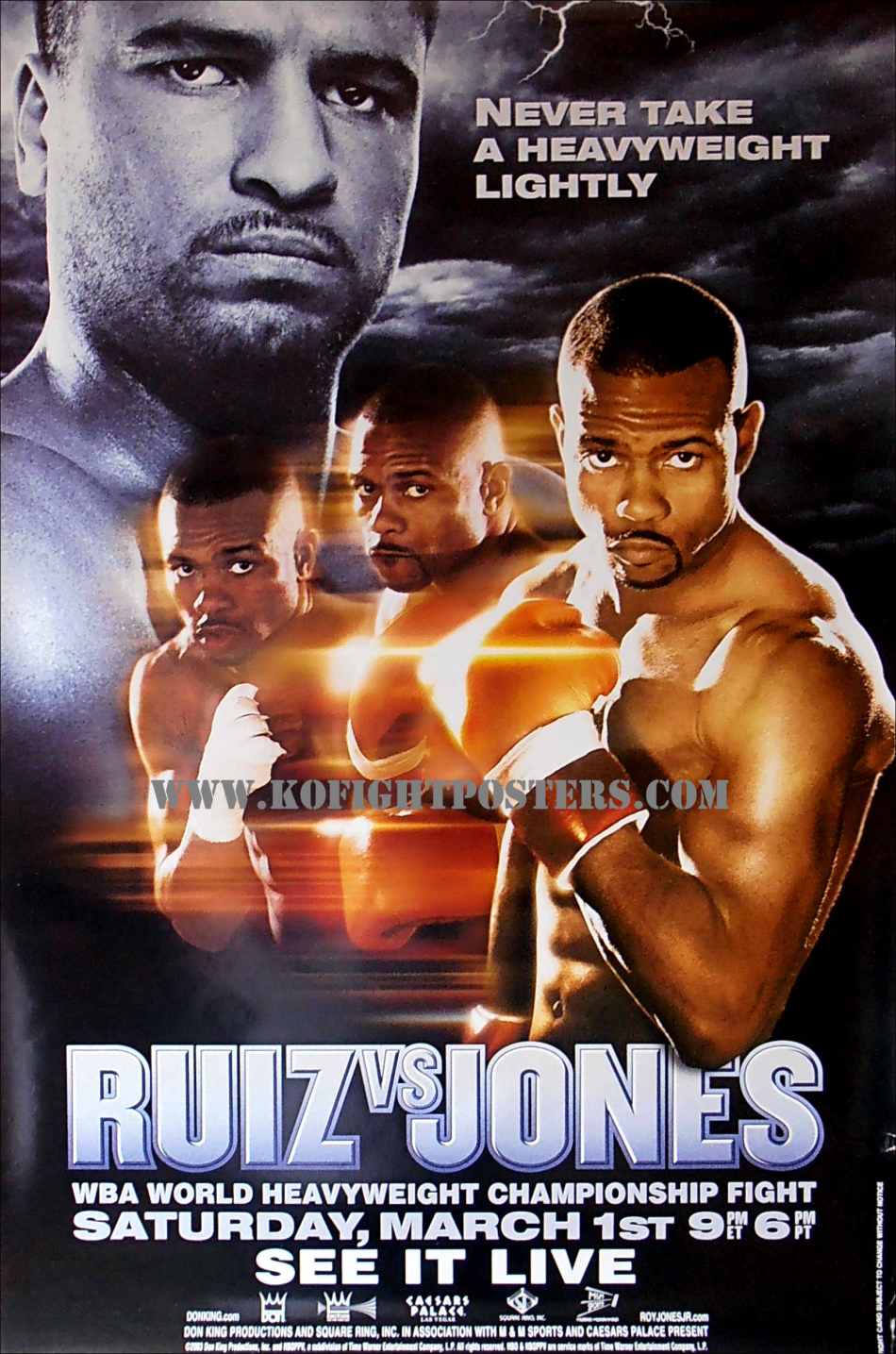 It was in 2003 that Jones excited the boxing community by making the move to Heavyweight division with a host of names thrown his direction, one being the real possibility of Evander Holyfield but in the end, John Ruiz was picked for his shot at glory, the win would add to the legacy.

“This was history, the first fighter to jump from middleweight to win the heavyweight title in over 100 years. John Ruiz had no clue what he was dealing with or what he was facing. He found out the hard way.” Jones said recently.

He certainly did, Ruiz plundered forward but was met with resistance in the form of speed, Jones Jr looked to be having a ball on route to a wide unanimous decision, mimicking the loading of a gun before shooting the right hand to the head of Ruiz, the smile on my face afterwards beamed in the knowledge that I was witnessing a one of a kind superstar with no other fighter his equal.

It was bittersweet, thereafter although we caught glimpses of the greatness he possessed, his body had taken the toll of moving to the sports top division, the 24 pounds dropped were noticeable in his close victory against Antonio Tarver on November 8, 2003 before his eventual downfall, starting with a knockout loss to Antonio Tarver in 2004, repeating the same feat to Glencoffe Johnson via sickening knockout and made it third time unlucky in a decision loss to Antonio Tarver. 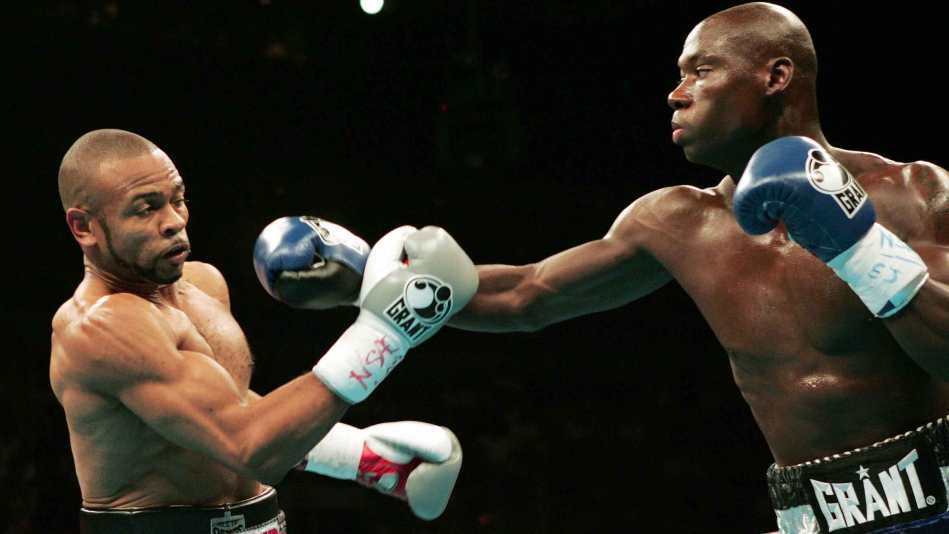 Wins over limited opposition were the course from here on out, a win against another over the hill fighter in Felix Trinidad the pick of them, now fighters knew the great Jones Jr was ripe for the picking, Losses to Danny Green, Bernard Hopkins in a past it’s sell by date rematch, Denis Lebedev and Enzo Maccarinelli were hard watching for me, knowing as we do that Roy would have made easy work of all in his prime, even Joe Calzaghe’s win over him in 2008 is somewhat tainted, sure it would have been great to see in Jones’ prime but those days had far passed, now we were seeing a shell of a fighter, reaching for another chance to prove people wrong, a chance that would evade his grasp.

It was with relief when receiving the news that his last would be against Scott Sigmon, the opponent represented a tough nights work but one in which Jones could showcase his many talents in his last hurray, even at the age of 49 we saw the quickness of his hand speed mixed with his clowning nature, it was what the spectators came to see.

From myself, I couldn’t Thank Roy enough for creating the fanatic I am today, I already held an interest in the sport but Roy put that interest at a level which as never been furthered.

I write this in the hope we don’t have any second thoughts, You’ve more than deserved your days in the sun, Happy retirement champ, sincerely from the boxing community.