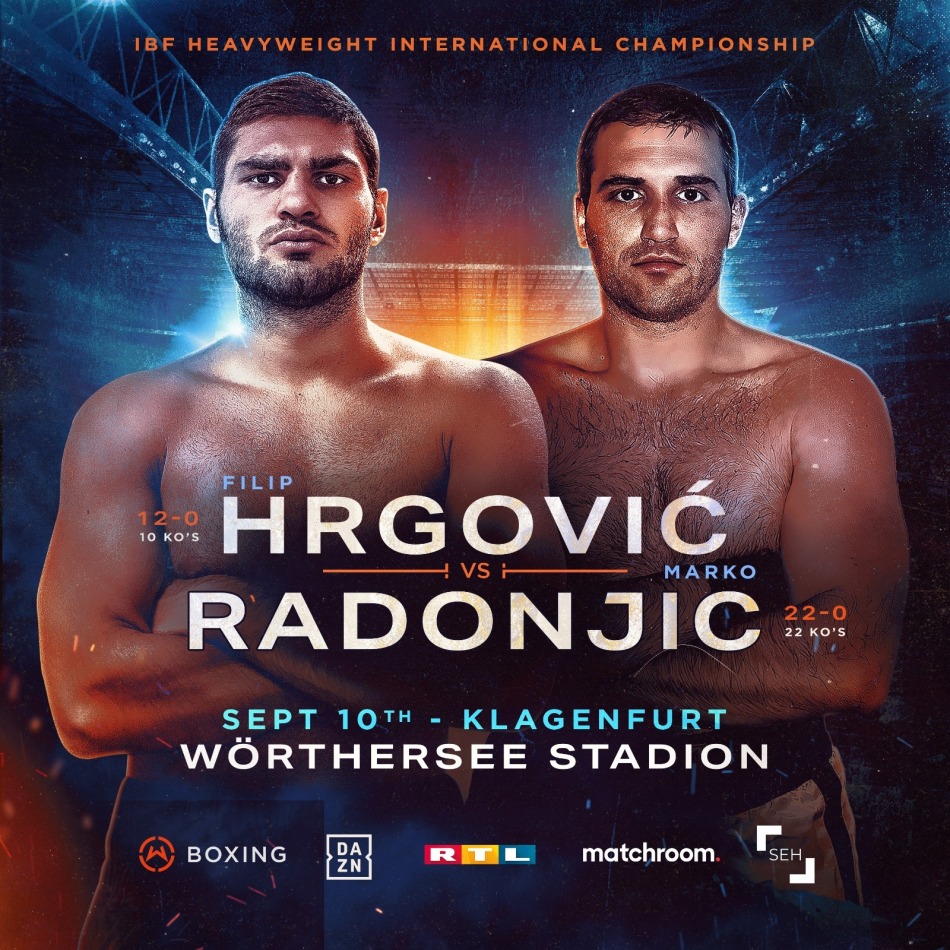 Unbeaten heavyweights Filip Hrgović (12-0, 10 KOs) and Marko Radonjic (22-0, 22 KOs) clash in a ‘Battle of the Giants’ on September 10 at the Wörthersee Stadium in Klagenfurt, Austria for the IBF International Heavyweight Title, live on RTL in Croatia and on DAZN in over 190 countries and territories worldwide.

Hrgović, the 29-year-old from Zagreb, Croatia, is one of the most feared fighters in the Heavyweight division. He returns to action following a sensational knockout win over American Heavyweight Rydell Booker on November 7 at the Seminole Hard Rock Hotel & Casino in Hollywood, Florida. The Rio 2016 Olympic bronze medallist has his sights set on a World Title fight with IBF ruler Anthony Joshua but knows he must first overcome Radonjic as he makes the maiden defence of his IBF International crown.

Radonjic, who is known as the ‘Montenegro Hammer’, holds an incredible record of 22 knockout wins from 22 contests. The 31-year-old from Cetinje, Montenegro, will face his toughest test against Hrgović, a man many are tipping as a future World Champion, but is confident of maintaining his perfect record and taking home the IBF International strap.

“This is going to be a great fight between two top Heavyweights,” said Hrgović. “I have a lot of respect for Radonjic for taking this fight when many wouldn’t. I’m excited to box at the Wörthersee Stadion. I expect a lot of Croatians to travel to support me and I look forward to fighting in front of the Austrian fans too. Radonjic has a good record, he has won all his fights by knockout, but he has never fight anyone like me. On September 10, he will feel my power and the ‘Montenegro Hammer’ will fall!,

Filip Hrgović is a great fighter and I’m really looking forward to fighting him, It will be an exciting fight between two big punching Heavyweights. I know Hrgović is a good boxer but I’m confident I can beat him. I will take the IBF International Title home with me. The ‘Montenegro Hammer’ is coming to win!”

The IBF International Heavyweight Title contest between Filip Hrgović and Marko Radonjic headlines an action-packed event at the Wörthersee Stadion in Klagenfurt, Austria promoted by Wasserman Boxing and Matchroom Boxing in association with SEH Sports and Entertainment Holding.

“We’re delighted to bring the ‘Battle of the Giants’ to the Wörthersee Stadium in Klagenfurt. This is going to be a sensational night of heavyweight action. Filip Hrgović is the most avoided heavyweight on the planet. He is the man no one wants to fight and for good reason! In the opposite corner, we have the ‘Montenegro Hammer’, another unbeaten fighter with a perfect record of 22 fights and 22 knockouts. This is a real treat for boxing fans. Two top heavyweights with dynamite in their fists. This fight is not going the distance. Expect fireworks on September 10!”

“Filip Hrgović is one of the most avoided men in the Heavyweight division and finding an opponent with the courage to step in the ring with him has been a challenge. Virtually the whole of the IBF top 15 turned down the opportunity to face him in a Final Eliminator. It’s great to see the Croatian contender back in action against the undefeated ‘Montenegro Hammer’ Marko Radonjic. Both men hold perfect records and I’m expecting an explosive Heavyweight fight in Austria on September 10.”

“Filip has been training hard these last months and can’t wait to enter the Wörthersee Stadium. There are a lot of Croatians living around Klagenfurt who will be there to support him and many more travelling from Croatia. The fans can look forward to another explosive performance from Filip as he shows why he is the most exciting fighter in the heavyweight division today.”

Tickets are on sale now and available via https://www.snapticket-live.de/battleofthegiants

0 comments on “HRGOVIĆ AND RADONJIC CLASH ON SEPTEMBER 10 AT WÖRTHERSEE STADIUM IN KLAGENFURT, AUSTRIA”