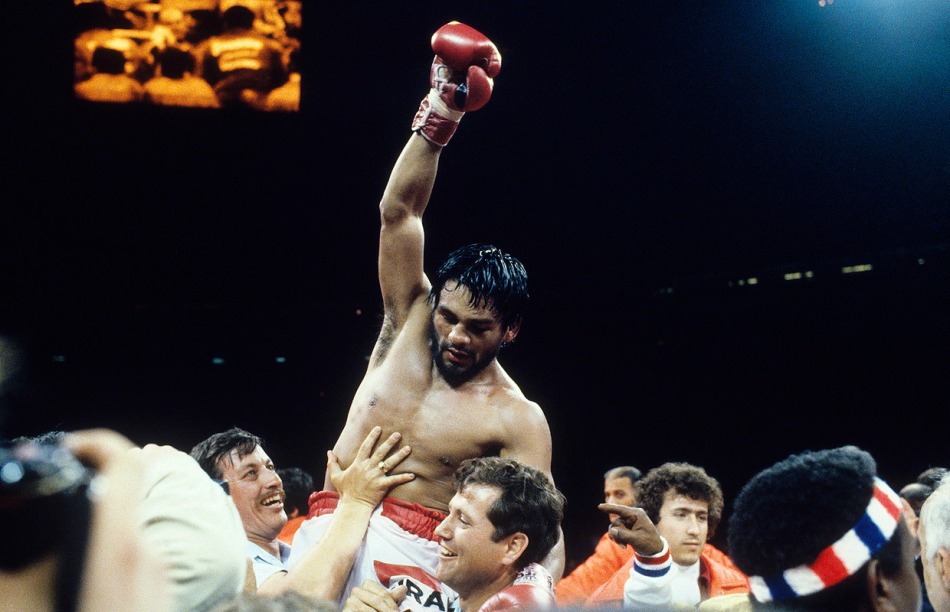 By Anthony “Zute” George – Roberto Duran turned seventy years old on June 16th, 2021. Indeed, The Hands of Stone has been considered a boxing legend for almost as long. Ever since he won his first world title in 1972, Duran was must-see television. With that fame, Duran has just as many wrinkles as a pugilist as he has had eyeballs fixated on him. Many of these wrinkles can be confused with contradictions.

Roberto can be described as a brawler yet has been highly touted as a boxer with terrific defense. With that said, Duran’s style is terribly problematic to duplicate and just as cumbersome to teach. It can be assumed such a style would take great discipline to master, yet Duran would never be considered the most disciplined of fighters in terms of taking care of his body. Indeed, Duran loved to eat, party and was known to scrimp on training. Still, Roberto’s longevity is right up there with the best (his underrated defense a significant contributor as to why).

To add to the contradiction, Roberto Duran is a certified warrior who is probably most famous for quitting in the ring. Indeed, one of a kind.

Here is a list of my ten favorite Roberto Duran fights. My criteria for picking these ten are simple. First, Duran had to be victorious. Second, I had to have watched these fights multiple times. I do not intend to suggest that these are Duran’s best performances, just the ten I deem my personal favorite. Here it goes:

A USA Tuesday Night Fights special While this fight might not be on other lists, I found it highly entertaining. Duran schooled and abused a young opponent for eight rounds. During this fight, Duran also took on the role of the referee when he gestured to referee Elmo Adolph that it was foolish to let Menefee continue after getting up from a knockdown. Adolph listened. Duran tipped the scales at 163 pounds for this bout.  His heaviest on my list.

This super welterweight clash probably took place a few years too late, but it was the start of the second half of Duran’s greatness. He dominated Cuevas and really depended on his underrated jab to set up his foe. While it was clear that both guys were on the other side of their careers when this fight took place,  it was just as crystal which guy was running on empty, and it was not The Hands of Stone.

Duran was at his most ferocious when he stopped Lampkin in 14 rounds. Truth be told, Lampkin probably did not belong in the ring with the lightweight champion. He did not beat anyone of note to earn the title shot and did not fight past 1976. Nonetheless, this is an entertaining fight to watch, and it was the maniacal Duran at his best.

Duran’s last fight as the Lightweight King saw him stop DeJesus in the twelfth round of their rubber match. I might have this fight higher on the list if I could ever see a nice quality version of it. In the lure of boxing fight collectors, this fight is renown as the big Duran fight where no excellent quality copy exists. Such a shame.

Duran against the former Welterweight King Palomino was one of the early gems featured on HBO. Duran vs. Palomino was the only HBO fight in the ’70s that featured two Hall of Famers, which was not a heavyweight fight or a replay fight. . Duran got off to a fast start and secured a ten-round unanimous decision. Such a high-caliber bout probably deserved more rounds. This was Palomino’s last fight before his return in 1997.

This was the rematch of Duran’s only loss at lightweight. Esteban won a 10-round decision over Duran in a non-title fight in 1972. Like in that first fight, DeJesus dropped Duran with a crisp left hook in the first round. The similarities stopped there, however. Duran was brilliant in close and at range and broke down DeJesus until he succumbed in the 11th round. A total war of attrition that Duran passed with flying colors. Such a fight and performance would be at the top of the list of most pugilists. But this is Roberto Duran we are talking about.

Duran just turned twenty-nine years in arguably his highest profile to date. Leonard was welterweight gold and was one of the few fighters who earned all-time great admiration from boxing pundits pretty much right out of the gate. Leonard was a decent-sized betting favorite and thought to be too fast and skilled for The Hand of Stone. Duran seized the day by making Leonard fight on his terms for 15 rounds. I always found this fight odd. While it is considered an all-time great action fight, and rightfully so, it is also a boxing match that showcased quite a bit of holding.

Shockingly, this is the only fight with Duran called a Ring Magazine Fight of the Year. Barkley shocked the world by knocking out Thomas Hearns to win the middleweight title in 1988. The Blade was unsuccessful in his first title defense against Duran, however. Duran dropped Barkley in the 11th round to secure a split-decision victory in one of the best back-and-forth action fights you will ever see. Just as unbelievable, Duran, who won the lightweight title back in 1972, became middleweight gold at  38.

Way before adding to his legacy at the age of 38. Duran bullied the popular Jr. middleweight champion Moore on the day he turned 32 years old. Some might find it odd that I have this fight at number two, but I just think it is one of the most brutal fights of all time, and Duran was never better. And he needed to be. The narrative of this fight is that Duran blew Moore away from the opening bell. I disagree. Despite getting thumbed in round one, Moore was giving it pretty good in the first few rounds, and if not for the unique blend of craftiness and savagery of Duran, Moore would have had his hand raised that night with the kind of fire power he showcased in the opening rounds. With that said, this fight should have never made it to the eighth round and would have no doubt been stopped today when Moore was decked in the seventh round.

One of the most intriguing fights that should probably get more attention than it ever has. Buchanan was by far the best fighter that Duran fought at lightweight and was a slight favorite over The Hand of Stone. However, Duran was brilliant against the super boxing skills of the Hall of Fame champion. Constantly closing the distance and taking away what Ken did best. Buchanan did have moments in the fight as well. Becoming aggressive in spurts later in the fight. But he could not sustain that square peg in a round hole mode against the caliber of a Duran.

What is most bizarre about this fight is the ending. The punch that ended the fight for Duran in round thirteen appeared to be both low and late. When asked about the conclusion of the bout, referee Johnny LoBianco did not think Buchanan was hit low but did acknowledge that the punch was after the bell, “He (Buchanan) got hit just after the bell rang, I did not think it should be counted….” So, why was it counted? Why was Duran awarded the title from an illegal blow?

Indeed, there was no doubt Duran was way ahead at the time of the stoppage. Still, with the nature of the way the fight ended, you must wonder why we never saw Duran vs. Buchanan II. He was certainly more deserving than most of the men who Duran defended against.

There you have it, my personal ten favorite victories from the now seventy-year-old Roberto Duran.

What are your favorites?

How close does it come to mine?