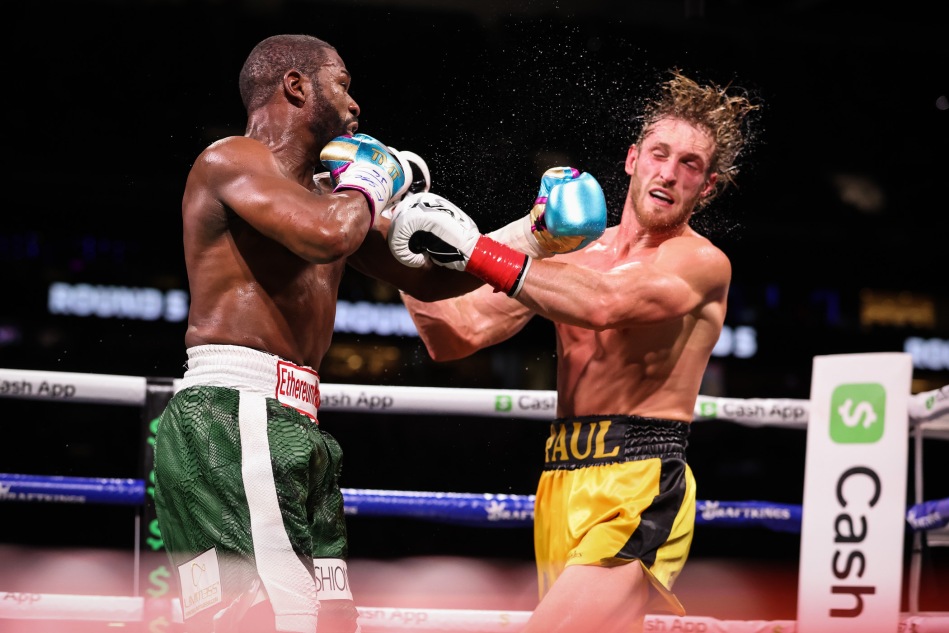 “He was strong, tough and better than I thought he was,” said Mayweather. “I was surprised by him tonight. That was some good little work.”

“It’s an honor to share the ring with Floyd,” said Paul. “He’s one of the GOATs. This is one of the coolest things ever.”

After weeks of buildup, the star-studded event pitted superstars from two different worlds in a highly anticipated showdown for sports and entertainment fans around the globe.

Mayweather displayed his typical patient and clinical boxing style, feeling out Paul in the opening round, before allowing Paul to come forward with a flurry of power shots at the end of the round that were mostly blocked, but excited the crowd nonetheless. As the fight wore on, Mayweather began to find a spot to land numerous power shots on Paul’s head and body.

Despite sustaining punishment in the middle rounds, Paul was able to use his over 30-pound weight advantage to frequently tie Mayweather up and avoid being stopped or sent to the canvas.

“Even without much experience, he knew to use his weight to tie me up tonight,” said Mayweather.

After the fight, the fighters expressed gratitude and inspiration to the fans who have helped them reach the tremendous heights that allowed this match to become reality.

“I had fun tonight,” said Mayweather. “I thank all the fans who came out, you’re all unbelievable.”

“I don’t want anyone to tell me anything is impossible ever again,” said Paul. “The fact that I got in here with one of the greatest boxers of all time, it proves the odds can be beat. Anyone can beat the odds and do great things in life. This is one of the greatest nights of my life, I’m happy.”

“The game plan was just to outbox him,” said Jack. “Everything else will come. Definitely, hit the body. He was a little soft in the body but I give him respect. He came out on short notice. He was supposed to fight next week but this is a different level.”

Known as a slow starter throughout his accomplished career, Jack came out faster in this fight and was sharp from the outset against the replacement opponent Colina, who stepped in for Jean Pascal after Pascal failed a pre-fight drug test.

“He was trying to hold a lot and survive,” said Jack. “I fight better when I fight better opponents. I was a little sloppy. The world class fights are when I perform the best.”

Jack’s effectiveness forced Colina to try to hold to stop the incoming attack, but he was only able to use that strategy briefly, as referee Frank Santore Jr. took away points for holding in rounds two and three, warning Colina that one more infraction would end the fight in disqualification.

In round four, Jack landed a straight right hand that put Colina on the mat in the opening minute of the frame. Colina fought valiantly to stay in the fight, but the body attack from Jack helped him finally earn the stoppage. A combination to the body put Colina down for the second time and a counter right hand dropped Colina for a third and final time as the referee halted the fight at 2:57 in the round.

“I’m a big guy and I walk around heavy, so I might move up to cruiserweight,” said Jack post fight about his future plans. “My goal is to become a three-division champion and I fight better when I don’t have to cut a lot of weight.”

“I’m not sure what went wrong tonight,” said Hurd. “I believe I won the fight. I had a knockdown. I could make a hundred excuses but it wasn’t a great performance.”

Arias controlled the early rounds of the duel, attacking Hurd with numerous combinations that landed flush. His clean power punching was an advantage throughout, as he out landed Hurd in power punches by a total of 153 to 120 while landing over 40% of those shots.

“The game plan was to jump on him, get the early lead and keep it,” said Arias. “I felt like in the middle rounds I was winning the fight but you never know because I wasn’t the A-side in this fight. I buzzed him a lot, especially on the inside.”

Hurd began to attempt to mount a comeback in rounds five and six, closing the distance effectively and finding a home for short right hooks and right uppercuts, with Arias even acknowledging that he was made unsteady after the action.

“I came in here and challenged the number one guy at 154 pounds and we fought somewhere halfway and I was able to edge a decision,” said Arias. “Props to Jarrett Hurd. You fought a great fight. Honestly, you could have had me out of there. I was definitely buzzed. If you would have found a way, I definitely would have gone down.”

In a fight that had two brief delays to weather affecting the ring surface, Hurd scored a knockdown in round nine with a glancing right hand after Arias appeared to slip on the ring. Despite the advantage on the scorecard, the uneasy footing affected Hurd’s plan to box Arias from the outside.

“The plan coming out in the first round was to box,” said Hurd. “I wasn’t as confident in my feet as the rain came down, so I had to go toe-to-toe more. That wasn’t really what we trained for, so I was a bit sloppy.”

Arias bounced back effectively from the knockdown in the final round, with his onslaught eventually forcing Hurd to look to hold on in the final minutes to reach the final bell. In his first outing with new trainer Ismael Salas, Arias ended the night victorious, with one judge scoring the fight 95-94 for Hurd, overruled by scores of 97-93 and 96-93 for Arias.

“I would like to thank Ismael Salas,” said Arias. “I came to him semi-late. About six or seven weeks and I needed to change something in my game plan to beat Jarrett. The things I was doing before would have gotten me a loss tonight. I needed somebody to just tweak a little bit and put my game up a little bit so I could beat this champion.”

“I’ll take the rematch at whatever weight,” said Hurd. “I know I’m the better man.”

In the opening bout of the pay-per-view, former NFL star Chad Johnson made his boxing debut in an exhibition that went the four-round distance against versatile pro fighter Brian Maxwell.

“I had fun,” said Johnson. “I had two months to get ready for this and I want to thank God for keeping us safe out there. I want to thank Floyd, Leonard Ellerbe and my whole team for allowing me to check this off my bucket list.”

Johnson showed off the “sweet feet” that made him a six-time Pro Bowler, landing some strong jabs and check hooks from distance, while avoiding serious damage from Maxwell over the first three rounds.

In round four, Maxwell provided an exclamation to the bout, landing a counter overhand right that connected and put Johnson onto the canvas with 40 seconds left in the round. In his first foray into the sweet science, Johnson was able to recover from the shot, get to his feet and make it to the final bell.

Always willing to step into uncomfortable waters throughout his career, Johnson post-fight expressed hope that his venture into the ring will serve as a positive example for those watching.

“My life has always been about taking chances and doing crazy stuff and this is just another one off my bucket list,” said Johnson. “It’s a message for a lot of people who are scared to fail, scared to lose, scared to take chances to go out there and live. Don’t be scared to fail, it’s okay. I don’t box. I fight but it ain’t in the ring, so of course I was a little sloppy.”

0 comments on “MAYWEATHER & PAUL GO THE DISTANCE IN SPECIAL EXHIBITION”