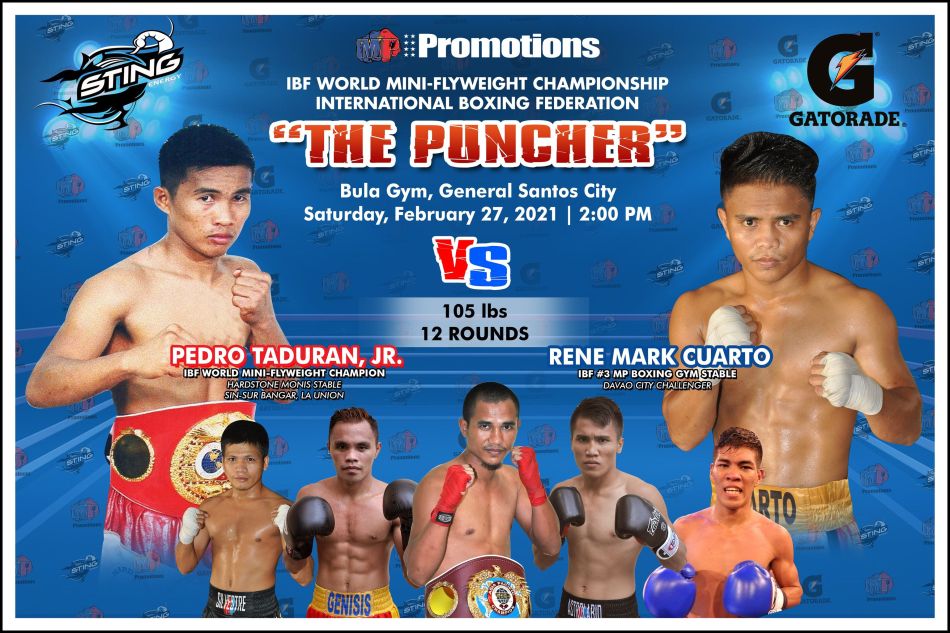 By Rene Bonsubre Jr – It was a fast-paced, action packed all-Filipino fight that unfortunately had to be held behind closed doors. Rene Mark Cuarto beat the odds and dethroned Pedro Taduran by unanimous decision for the IBF world minimumweight title.

The fight was held at the Bula Gym in General Santos City but due to the current quarantine procedures in the Philippines, fight fans had to be content with watching the card online.

Both were tentative in the early going but things got heated in the third. They engaged at close quarters but Cuarto’s left hook and right lead, both time tested weapons against a southpaw like Taduran, began to find their mark.

Taduran pressed the action, while Cuarto was more effective using lateral movement to find angles for his left hook and counter right. The rounds were highlighted by heated exchanges.

In the seventh, Taduran shook Cuarto with a hard left and had the challenger backing up. But Cuarto recovered in the eighth as Taduran continued his pressure. The fight was close and up for grabs going into the last two rounds. It was matter of which style the judges’ preferred, Taduran’s aggressiveness or Cuarto’s counterpunching.

The three Filipino judges – Roel Densing, Brembot Dulalas, and Sabas Ponpon,Jr all had it 115-113 for Cuarto. The third man in the ring was Rodel Garde.

Taduran was defending for the second time. In February of last year, he had a four round technical draw against Mexican challenger Daniel Valladares in Guadalupe,Mexico.

The latest IBF rankings had Cuarto at number three going into this bout. He was the underdog based on their common opponent – another Filipino, Samuel Salva. Taduran won the vacant IBF title in 2019 against Salva. Six months prior to Taduran’s title win, Cuarto lost to Salva by unanimous verdict in an IBF ranking eliminator.

Cuarto’s lone appearance outside the Philippines was in Beijing in 2017, when he beat Chinese boxer Li Guangxiong by third round knockout.

Due to the ongoing pandemic, Taduran was idle for a year while Cuarto did not fight for fourteen months.