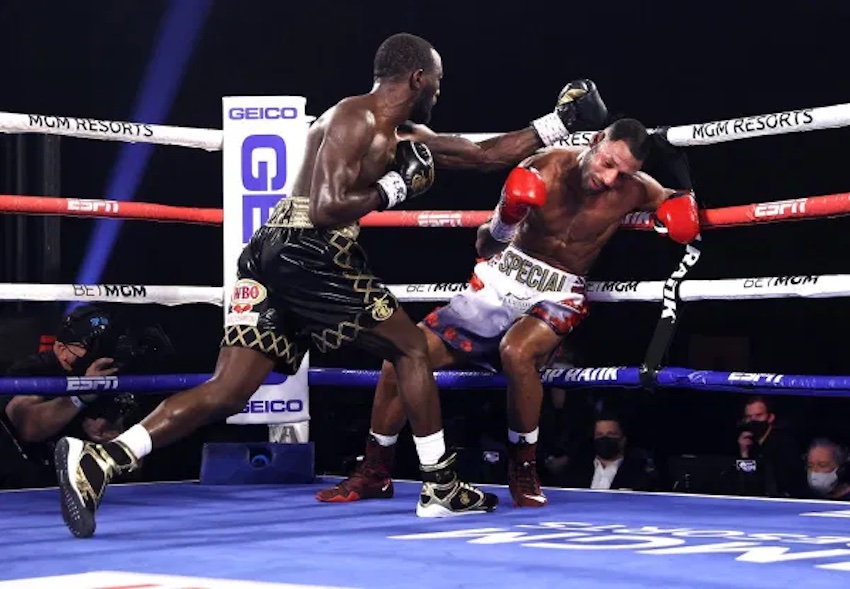 WBO welterweight king Terence “Bud” Crawford (37-0, 28 KOs) stopped former champ Kell Brook (39-3, 27 KOs) in the fourth round on Saturday night inside “The Bubble” at the MGM Grand in Las Vegas.

Brook started well but soon Crawford found his rhythm, rocking Brook onto the ropes for a knockdown before the inevitable stoppage shortly thereafter. Time was 1:14.

Terence Crawford: “I was trying to gauge the distance. He had good distance. I was trying to find my rhythm in between getting my distance together. That’s why it was so competitive at first. I couldn’t get my shots off. Kell is a tremendous talent. He came and he tried to take my title. He was in shape. He made the weight. There were no excuses to be put on the table. He came off of three wins. He lost to the better man.

“I already said who I want {next}. I want Pacquiao. I want to revisit that fight. That was a fight that should’ve happened right now. But being that the pandemic happened, and they weren’t going to allow fans in the Middle East, they had to put a hold to that. Everything was 95 percent done. We had the venue. The money was almost there. It wasn’t quite there. That was the only thing we were waiting on.”

Bob Arum: “Terence Crawford showed, once again, why he is the best welterweight in the world. It was a dominating performance over a very good fighter in Kell Brook. Terence ranks up there with all the great welterweights I’ve promoted.”

Kell Brook: “Never in my career, nobody has ever done that to me in sparring or anything. It was one of them… I got caught with a shot I didn’t see. I’m gutted because nobody could’ve gotten me in better condition. I was bang on the limit. Maybe I could’ve been a bit more relaxed and loose and let the shots go.”

Moloney was quick out of the gate, landing numerous shots on the champion whose eye immediately started to close as he looked on course to regain his crown, however controversy would raise it’s ugly head as It was decided that Franco couldn’t continue in the third but the more quizzical verdict was that the eye was closed via a phantom headbutt.

Official’s poured over footage for near on 30-minutes before making their decision, TopClassBoxing did the same without coming to the same conclusion.

Andrew Moloney: “They took this away from me. The injury was caused by a punch. I can’t believe this. I was in control of the fight and on my way to a clear victory. I deserved this win. I landed 50 punches on that eye. It was not even close.”

Bob Arum: “This is an absolute disgrace. There was no headbutt. Andrew Moloney should be the new champion.”