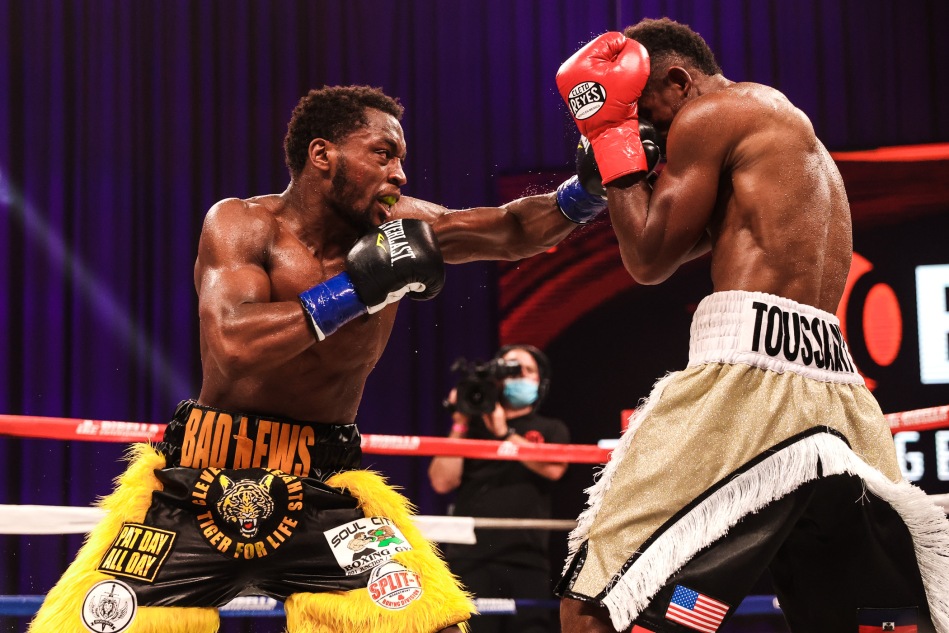 Cleveland’s Conwell of Split-T Management (13-0, 10 KOs) methodically wore down the Haitian Toussaint (12-1, 5 KOs) before landing the fierce uppercut that broke Toussaint’s nose and forced him to take a knee at which point he was counted out at 2:42 of the ninth round. (Watch the KO HERE )

It was a grinding, workmanlike performance from Conwell, who landed 28 body shots among his 78 landed punches against the capable Toussaint, who works as a school bus driver and a volunteer fireman in Huntington, N.Y. Conwell was out-landing Toussaint 59-39 in power punches and was ahead on all three judges’ scorecards at the time of the knockout. Toussaint became the 193rd fighter on ShoBox series to lose his undefeated record.

“I think this was a good fight for my first fight back, getting the ring rust off, but at the end of the day we got the job done,” said Conwell, a 2016 U.S. Olympian. “The game plan going in was to break him down round by round, go to the body until we got him to where we wanted him. I give my performance a C-plus, there were a lot of things I could have done better. I’m going to get back in the gym and continue to work hard to become the champion I know I can be. I’ll fight anybody next, but I really want an ex-world champion or ex-title challenger so I can get the championship rounds under my belt. Then it’s on to a world title.”

In the co-featured bout between two all-action fighters who promised a brawl, it was the undefeated 21-year-old Janelson Figueroa Bocachica (16-0, 11 KOs) who came out on top against Puerto Rico native Nicklaus Flaz (9-2, 7 KOs).

Bocachica, who is promoted by King’s Promotions and managed by Split-T Management unleashed a power-punching assault on Flaz, as all 26 of his landed punches were power shots, including a clean left hook that knocked Flaz down for the first time in his career. From there, Flaz was wobbled and never able to recover as Bocachica sent him to the canvas for a second time and continued the barrage of punches that ultimately forced referee Johnny Callas to stop the fight at 2:43 of round one. (Watch the stoppage HERE )

“I came in and they said he wanted to brawl, and as soon as he did, the fight was over,” said Bocachica, a Detroit native, who like Flaz is of Puerto Rican descent. “The game plan was to showcase my boxing. I didn’t get to do that but I’m happy either way. I’m not shy calling out guys, but I’m trying to be respectful to the best in my division. I’m here, so bring them on. One-hundred forty-seven [pounds] is mine. It was easier than I thought, I’m not going to lie. But I didn’t think it was going to be hard.”

In the telecast opener, highly regarded 140-pound prospect Brandun Lee (20-0, 18 KOs) proved that he is ready for an even greater challenge, blitzing Jimmy Williams (16-4-2, 5 KOs) with three vicious knockdowns in the first round en route to a stoppage victory. The La Quinta, Calif., resident has KO’d all but two of his professional opponents, and now owns 12 first-round knockouts.

The hard-punching Lee, who was the last fighter to appear on ShoBox prior to the shutdown in March, wasted very little time in dispensing Williams, a former college football standout who was fighting for the first time in 2020. Lee forced two knockdowns prior to the final blow, a picture-perfect right hand that connected flush on Williams’ chin and sent him sprawling through the ropes. The stoppage came at 1:34 of the first round.

“I’m blessed with the natural power and that’s what the fans saw from me tonight – I’m here to entertain the fans and seek and destroy,” said the 21-year-old Lee. “The game plan was to go in there and do what I do best, which is to destruct anything that is in my way. When I fought last fall on SHOWTIME for the first time in Texas I felt like we rushed it too much. And back in March on SHOWTIME I felt like we waited too long. So I think this fight was perfect. We hit it right on the money, not too fast and not too slow.”

Wednesday’s fights were promoted by Tony Holden Productions. The full telecast will replay on Wednesday, October 14 at 10 p.m. ET/PT on SHOWTIME EXTREME and will be available on SHOWTIME ANYTIME® and SHOWTIME on DEMAND®.