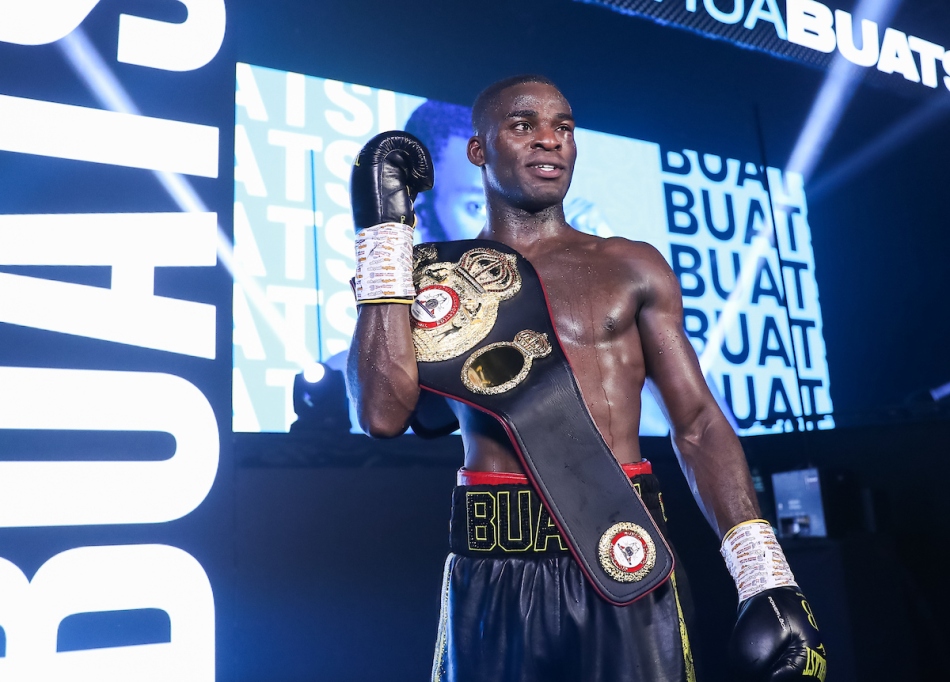 Croydon’s Joshua Buatsi came through the toughest test of his career yet as he stopped tough Croatian Marko Calic in seven brutal rounds to retain his WBA International Light-Heavyweight Title in the main event at the Marshall Arena in Milton Keynes, live on Sky Sports in the UK and DAZN in the US.

The 27-year-old preserved his perfect professional record with a display of grit and firepower as he overcame the Calic’s aggression in the opening rounds, then explosively forced the stoppage to bring up his 13th straight win.

“His jaw was broken,” said Buatsi afterwards. “In the third round I felt my swelling. I thought ‘damn!’ You do what you’ve got to do. He went southpaw so I looped the right hand. He hid it, but he was hurt. This guy said he was coming to burst the Buatsi bubble. I was here to defend it.

“People didn’t know about him, the spectators and the public, but in our camp and within our team, we knew he was a good fighter. I was out for 400 days. We bit down on the gum shield and we got the win. This is a gentleman’s sport, big credit to Marko Calic. I wish him nothing but the best. I wish him good health. Maximum respect to him.

“He came in and he gave me a good run for my money. I hope he gets home safely to Croatia. It was a hard fight but I learned. He didn’t just come to make up the numbers. He was a good fighter, heading into our fight unbeaten. I couldn’t see his right hands, I adapted. I dealt with it. If the World Title fight in 2021 opportunity is presented, and I’ve had the right fights, then absolutely.”

Araujo had failed to make weight, meaning that only Cameron could claim the vacant belt, and she did exactly that in impressive style, outclassing the London 2012 bronze medallist to earn the famous green and gold belt that had been vacated by her Matchroom stablemate Jessica McCaskill.

“I’m absolutely buzzing,” said Cameron. “Jamie and Nigel were telling me off at times because I was taking a few risks. She was a lot heavier and I could feel the weight difference. It’s just instincts, I like to have a scrap! Winning this World Title is perfect timing for me. If it were eight fights ago or even five fights ago she would have beat me because I would have just stood there toe-to-toe. Since I’ve been working with Jamie and Nigel, I’ve learned to box more. They keep telling me to pace myself and hold myself back more. It worked.

“I can’t put it into words how it feels. I was nervous but my team kept me calm and it meant it was a good performance. I wanted this belt, so I had to keep my head on. She wasn’t professional enough to make the weight, but I knew no matter what I was becoming champion. Thanks to everyone for watching, I can’t wait to come back to Northampton with the belt. This is just the start.”

Trainer Jamie Moore added: “I’m over the moon for Chantelle. She’s worked so hard. The weight difference on the night was massive. I think she could have got her out of there if it was a level playing field. Tactically she followed the game plan brilliantly. This is the start for her now. She’ll be involved in some exciting fights.”

Alen Babic blasted out Niall Kennedy in the third round as ‘The Savage’ continued his destructive progress as a Heavyweight contender. The Croatian was extended into the third round for the first time, but swiftly finished off Kennedy with an explosive assault to bring up his fifth straight knockout win.

Charging out from his corner, Babic unloaded a barrage of early hooks, and Kennedy had to withstand clubbing shots in the opening round. Kennedy wilted to the canvas in the second, with the referee ruling out a knockdown, but Babic continued to hammer away with brutal punches from both hands.

A short, savage hook sent Kennedy toppling to the floor in the third and Babic ruthlessly followed up with more sustained shots to force the referee’s intervention.

“He was badly shaken,” said Babic after his latest KO. “Even two minutes after the fight he was still badly shaken. He was down two times. It was a hard situation. I was savage, but I wasn’t 100% savage. I’m a little bit annoyed at myself. I’m angry at myself for that. I wanted to bring something new because I knew I could control Niall.

“I was much lighter than him but you saw how I controlled the ring. I wanted to show more stuff but he was too hittable. He was easy to hit so I just went with my guts, I blasted him out to force the stoppage. I beat Niall at maybe 60% of me. I wasn’t shook up once. It was a very easy fight.

“Critics? I love you. Critics made me. They made me better. I will make you into my army. I will keep winning, I’ll have 10 fights and 10 KOs. Tom Little is next for sure. He should fight me. He is a cool guy; he is a warrior. It’s going to be a very fan friendly fight. The fans want to see it so lets get in the ring with Tom Little. I do all of this for my fans. I get so much love from my fans. Every single one of them is a part of my success.”

Baker had voiced his dismay when Fiaz was forced to pull out of a summer fight through illness, but the 21-year-old prospect had the final word, triumphing with a tally of 77-75.

The crisp, cleaner work from Fiaz caught the eye of the judges, despite a determined late rally from Baker.

“I’d like to thank the team at Matchroom for getting me on this show and keeping the trust in me after the incident last time,” Fiaz told Matchroom afterwards. “I’d like to thank my team, Jamie Moore, Nigel Travis and my brother. I love them guys to bits, and without them none of this would be possible.

“I thought I dropped maybe two rounds. It was my first eight rounder, last time I only fought over four, so it was a big jump up. We practiced pacing the fight. I was happy with my performance. I need to watch it back to score it and stuff but I’m happy enough with it yeah.

“I was pretty comfortable, I’m not going to lie. I knew he was going to bring it. I know what he’s about. He’s an all-action fighter, and I can be an all-action fighter too, but tonight was about pacing myself through eight rounds and gaining valuable experience for when I’m in title fights. We get the win and we move on.”

Takeley Super-Middleweight debutant John Hedges overcame a tricky introduction to life in the paid ranks with a well-earned 39-37 points win over the tough and game Manchester-based Czech Jan Ardon.

Standing at 6’5″, the southpaw Essex native looked imposing in the ring, and used his height advantage well, punishing Ardon whenever he came in close in the opening round. Ardon was determined to cause a shock on Hedges’ big night, landing a couple of big overhand rights on the 18-year-old.

Former amateur standout Hedges used his southpaw stance well in the closing round, landing a couple of decent left hands on the advancing Ardon, and a couple of good left hooks too that secured him a win on his professional debut.

“I feel like I did enough to get the win,” Hedges said afterwards. “It wasn’t a good performance from me in my opinion. I know what my ability is, and I know it’s better than that. No excuses really. There’s a better performance in John Hedges. You’ll see it next time, I can promise that.

“I rate my chin for my age. I didn’t feel the shots and I didn’t feel fazed by them. It’s the first-time boxing without a headguard and the first-time boxing with 10oz gloves. Everything is new and it’s what I wanted. I only found out about this opponent on Sunday night, so we didn’t have much notice – to add to the nerves. We were practising for an orthodox and a southpaw came in at the last minute.

“No excuses from me – I’m a better level than them boys. I got the win today but I’ve got a lot more to show. I’ll never forget this experience for as long as I live. It has been the best five days of my life, and the win has just topped it off. Thanks to Eddie Hearn and Matchroom for giving me the opportunity.”

Luton’s Linus Udofia looked impressive as he successfully defended his English Middleweight Title for the first time against Brixton’s John Harding Jr, stopping the 36-year-old in nine rounds in the opening bout of the show in Milton Keynes.

Heading into the fight unbeaten in 15, Udofia sprang to life in the second round, landing a bit right and a crunching left to the ribs of Harding Jr. Udofia took advantage of his superior shot selection as the rounds progressed, moving from the body to the head and back again.

Despite clearly tiring, Harding Jr was able to make the mid rounds competitive, getting in close and roughing up the champion. Udofia took control of the fight once more in round seven, keeping the game Harding Jr on the end of his jab.

Udofia ended processing two minutes and seven seconds into round nine, connecting with a powerful short right hand that knocked Dillian Whyte’s charge to the canvas. Harding Jr rose to his feet at eight seconds but the referee waved off the contest.

“It wasn’t a bad performance having been out of the ring for such a long time,” Udofia told Matchroom after his win. “It was coming up to a year since my last fight, so it was good to get active again, especially during these strange times we are going through. I feel really good. I thought the performance went well, I was listening to Terry. I got caught with a couple of silly shots and we will work on that when we get back in the gym.

“I did a good enough job and we started to see him fade during the later rounds. That’s what we expected and we took advantage of it. I feel like we did well, but there’s a few things to work on. From what I saw I thought he was up after the knockdown. He got up slowly. I’m not going to argue with the ref because safety comes first. The stoppage was coming anyway. I might be being critical of myself but I think we’ve got a lot of things to work on if we’re going to move on to British and European level.

“I don’t think I showed 100% of what I’m about. We’re going to enjoy a couple of days off and chill out. Then we’ll get back in the gym and we’ll work on things. We’ll see what the next steps are. Like I said, I feel like I’ve got more to offer. I think I need to display more. It’s not about the opponents it’s about the titles, so if I’m going up the levels there’s a few things we need to work on.”