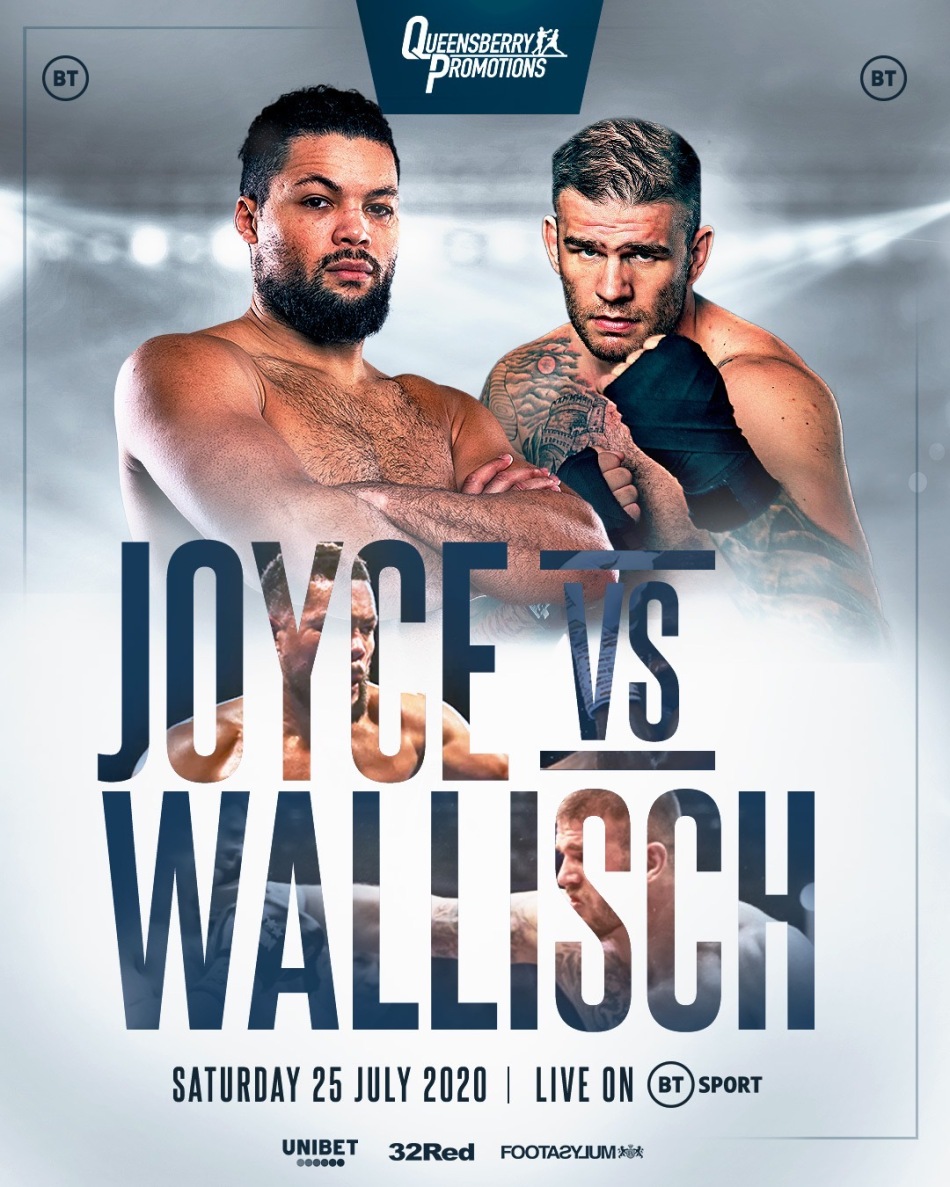 Boxing returned to BT Sport for its second showing of the behind-closed-doors era with an action packed, KO-heavy spectacle from the BT Sport Studio in Stratford.

In the main event, Joe Joyce would seek to protect his October showdown with Daniel Dubois by seeing off German bruiser Michael Wallisch, but up first was a four fight undercard that began with a featherweight firecracker between Dubois teammate Louie Lynn and Monty Ogilvie.

In characteristic fashion, ‘Loco’ Lynn stormed out at the opening bell with furious intention. Everything he does is at 150mph and by the time he landed a thunderous left hook to stun Ogilvie, the round looked to be escaping the Scot. Lynn soon followed with a barrage of punches, leaving Ogilvie to try and contain his younger foe. Despite game attempts to spoil Lynn’s ascendancy, the round was a clear 10-8 to the Banstead Featherweight after a conclusive knockdown.

Round 2 started in much the same way, and whilst Ogilvie would occasionally throw back, there was nothing to concern an ascendant Lynn. Louie soon had his opponent down once more, and this time the referee waved it off.

Louie Lynn improved his record to 7-0, with 6KO’s.

Young prodigy Turner settled into the first round well, delivering a composed performance from behind his southpaw jab. Adaway, a game scrapper who had only been finished 8 times out of 82 contests, showed why he was such a tough man to get out early.

In the second, Turner continued the good work by allowing Adaway to launch his own attacks before countering with precise movement and powerful combinations. The third round was another decisive victory for Turner, though as he opened up his attacks he did have to take a few of Adaway’s best efforts.

As the round came to a close, Turner scored a knockdown to ensure he was on the way to a shutout victory.

In the fourth round, Adaway decided to take the fight to Turner but ‘The Showman’ was able to evade capture and continued to pepper his opponent with shots of his own. Adaway was able to avoid being finished but could not stop Turner from improving his record to 3-0.

Next to impress was Denzel ‘2 Sharp’ Bentley, who took a step up in opposition with his middleweight clash against Mick Hall, who entered the ring with a record of 15 wins and 2 losses.

Hall found the mark in the first with a couple of shots that got Bentley’s attention, but Denzel would end the round with his hands down, hunting his opponent out. Both men had successes, but it was Denzel who would enter Round 2 in the ascendancy.

Denzel opened the second with a stiff jab, before starting to swing with evil intention as he sought out the finish. The knockout wasn’t forthcoming but the Peacock man did a good job of establishing his power and dominance.

The third round carried on in much the same fashion, with Bentley throwing power shots at will. As the pace began to show on the face of Mick Hall, Denzel was able to close the round with a period of sustained pressure that his opponent was lucky to see the other side of.

A scrappier fourth saw Hall land some good shots of his own, but Denzel maintained good pressure of his own to claim a tight round.

In the fifth, Denzel started in orthodox after several rounds experimenting with southpaw attacks. A slower round saw Hall have more success as the pace began to tell on Bentley.

A tough Mick Hall took more explosive shots as Denzel ramped up his attacks in round six, with a particularly stiff right hand opening up Hall’s right eye. Hall did his native Preston proud by seeing the round out on his feet, but he was not allowed to see the seventh round by his corner.

Denzel Bentley improved his record to 13-0 with 11KO’s, and showed to everyone watching on BT Sport why he considers himself to be ‘2 Sharp’ for the Middleweight division.

In the penultimate fight of the evening, the vacant Southern Area Super-Bantamweight title was on the line as Chris Bourke took on Ramez Mahmood. Bourke was looking to follow in the footsteps of Peacock teammates Louie Lynn and Denzel Bentley by delivering a spectacular performance under the BT Sport Studio lights.

An evenly matched open round saw Mahmood attempt to establish the jab early but also saw success for Bourke as he attacked his foe’s body. The Peacock man stepped up his attacks in the second, blitzing his opponent from the opening bell. The pace slowed as the round progressed, but it was a good round for Bourke and a clear victory.

Bourke’s usual crispness was on display in the third but Mahmood was able to vary his attacks as the round went on, landing an uppercut from up close that caught Bourke’s attention.

The fourth and fifth round were close affairs with Bourke landing some solid body shots to edge himself ahead on the BT Sport pundits’ scorecards in the fourth, before a scrappier fifth allowed Mahmood to regain some ground.

The natural ability of Bourke started to show in the sixth as he began to move around his opponent effortlessly, picking his shots well and continuing his work to Mahmood’s body.

As the fight moved on through the seventh, eight and ninth the gap on the scorecards only increased between the tough Mahmood and a classy Bourke. Significant shots were short on the ground, but Chris Bourke showed wonderful footwork and head movement, whilst picking his shots with all the skill of a soon-be-crowned champion.

Mahmood pressed the action in the final round, leaving both men looking nervy as we went to the scorecards.

The referee gave it 96-94 to the now 8-0 Chris Bourke, who was delighted to be crowned the new Southern Area Super-Bantamweight Champion.

Heavyweight boxing returned in the main event, as ‘Juggernaut’ Joe Joyce sought to shake off the year-long cobwebs, see off 23-3 bruiser Michael Wallisch and book his spot in a main event against Daniel Dubois on October 24th.

Wallisch found a home for his right hand over the top several times in the first, but as the round came to a close Joyce was starting to find something of a rhythm. Wallisch tried to interrupt Joe’s flow in the second but a relentless Joyce continued to club his man, eventually seeing him down with a right hook to the body followed by a glancing hook to the temple.

The decisive moments came in the third where a second knockdown was followed swiftly with a big right hand to the chin that wobbled the big German. At that, the referee said he’d seen enough and waved the fight off.

Joe Joyce will be happy to have done the job behind-closed-doors, but sights will now be set on a sold-out clash at the O2 Arena in London with Daniel Dubois on October 24th.