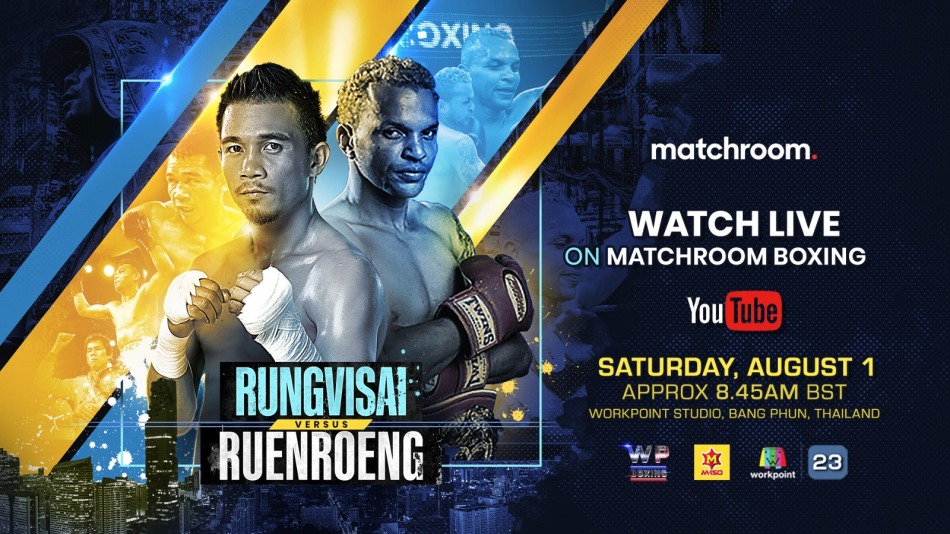 Ahead of our Fight Camp opener, the ten round contest from Thailand will go out across Matchroom’s YouTube channel.

Fans around the world (excluding in Thailand, Caribbean and Latin America) will be able to watch from approx 9.45am (BST) on fight day.

Ruenroeng, a former IBF World Champion, looks to make it three wins on the bounce and put his name firmly back into title contention.

Promoter Eddie Hearn said: “As if August 1st couldn’t get any bigger with the launch of Matchroom Fight Camp, the return of former WBC Super-Flyweight World Champion Rungvisai against former IBF 112lbs ruler Ruenroeng will now be shown live on the Matchroom YouTube channel.

“It’s a great little warm-up at 8.45 in the morning for what will be a very exciting day for the world of boxing. Next Saturday is all about the return of boxing. Fight fans will get a chance to watch a pound-for-pound star in Rungvisai before enjoying the opening night of Fight Camp.

“Juan Francisco Estrada will fight ‘Chocolatito’ next, we’re in the process of trying to make that fight, probably for October time in America. The winner of that fight will face Sor Rungvisai providing he gets through on the 1st. It’s a great little run of fights for those three and the division itself. We’re so lucky to represent those three great fighters.”

Fans are invited to subscribe to the channel ahead of the live coverage: https://www.youtube.com/user/MatchroomBoxing

0 comments on “MATCHROOM TO LIVE STREAM RUNGVISAI VS. RUENROENG FIGHT”