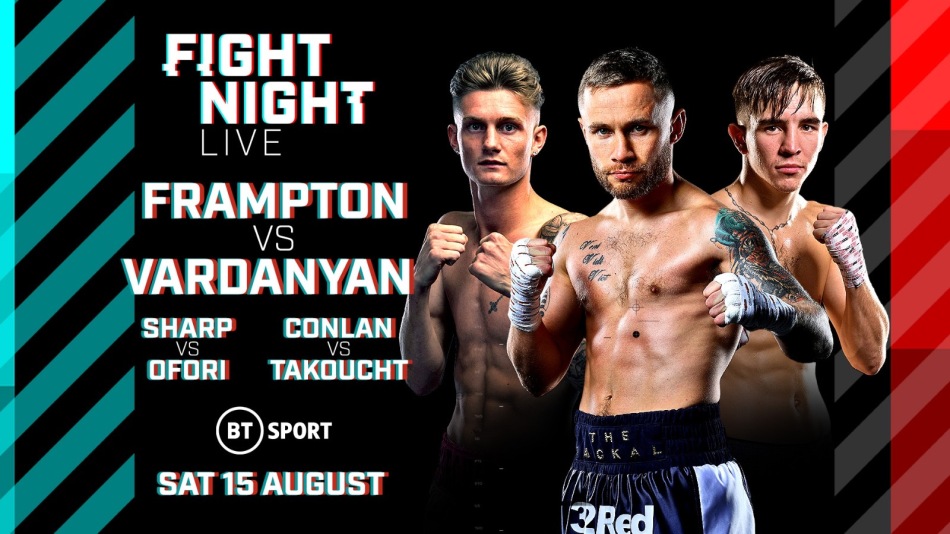 THE FOURTH SHOW of BT Sport’s exciting summer schedule has been brought forward and will now take place on Saturday August 15 with the addition of Belfast stars Carl Frampton and Michael Conlan to the card.

The BT Sport-televised show was initially listed to take place on Thursday August 20, but now switches to the previous weekend with the significant bonus of two-weight world champion Frampton and featherweight contender Conlan being drafted into action.

The originally scheduled headliner between Archie Sharp and Jeff Ofori for the WBO European super featherweight title remains on the card along with an IBF European Super-Welterweight title defence for Troy Williamson.

Frampton, 33, who is awaiting confirmation of his challenge to WBO world super featherweight champion Jamel Herring, will take on the Armenian Vahram Vardanyan, who holds a record of 21-1-1.

The Jackal (27-2-0) last fought in November in Las Vegas when he outpointed Tyler McCreary over 10 rounds.

Conlan (13-0), 28, who holds both the WBA and WBO Intercontinental titles, goes up against the experienced Frenchman Sofiane Takoucht (35-4-1).

Takoucht, 34, has been stopped only once in his professional career and is a former IBF International champion and world title challenger. His single stoppage came in his full IBF title challenge against Josh Warrington in Leeds back in October of last year.

The unbeaten super featherweight Sharp will clock up his 19th professional fight against the 10-2-1 Tottenham man Ofori. It will represent a fourth defence of his WBO European title for the 25-year-old.

Unbeaten Darlington man Williamson defends his title and his record on the show whilst thrilling prospect McCann, just 19, will be having his seventh professional fight since turning pro in May last year.

0 comments on “FRAMPTON AND CONLAN ADDED TO SUMMER SHOWDOWNS”