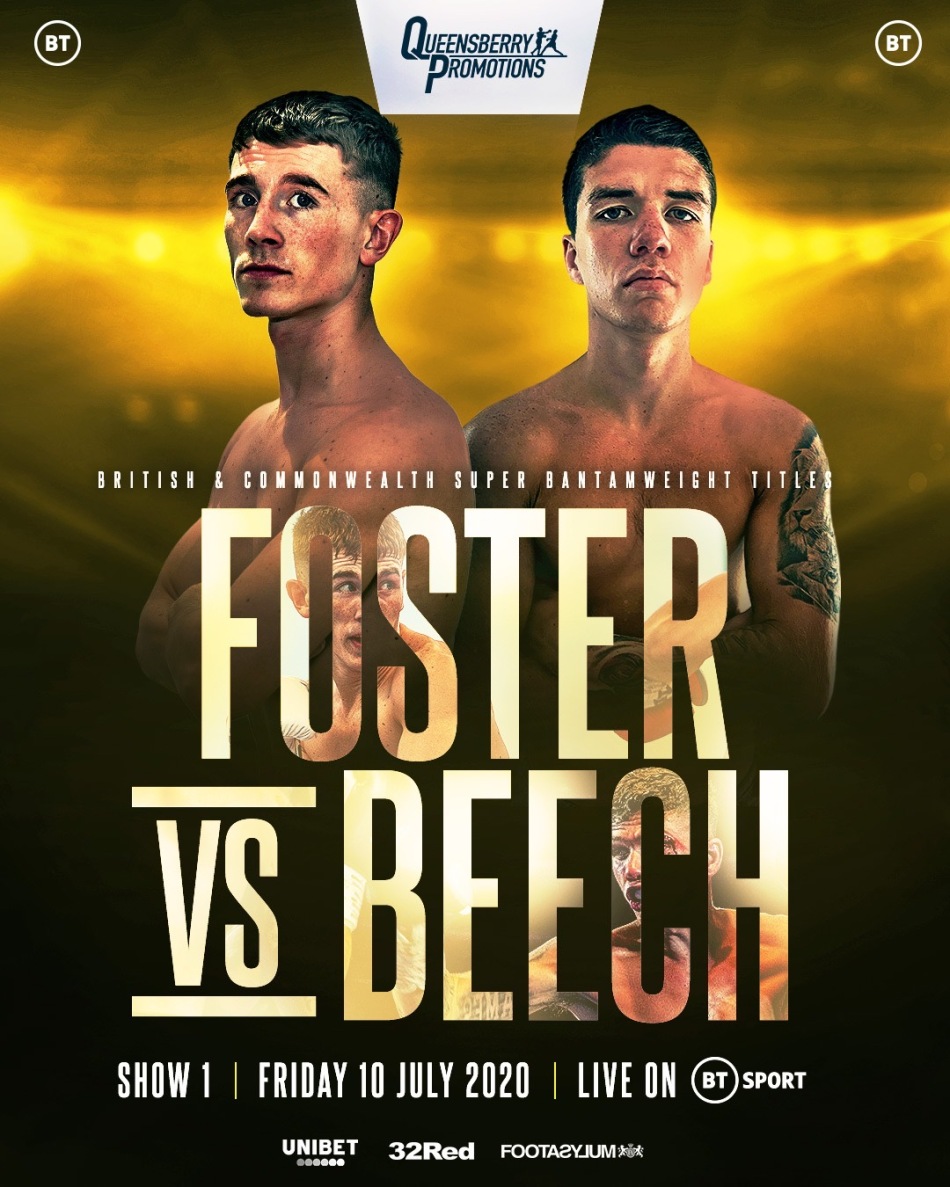 It might have taken 118 long days, but British boxing is back on TV screens courtesy of Queensberry Promotions and BT Sport.

After a brief explainer by Steve Bunce about how boxing was brought back from the brink, the stage was set for a great night of boxing from the BT Sport Studio.

Up first was heavy-handed, undefeated Lightweight prospect Mark Chamberlain who would face off against Wiltshire’s ‘Little Canelo’ Stu Greener.

The 5’11” Chamberlain immediately pressed the action in a frenzied start which would see him switch attacks from head to body and back again.

Using a dizzying array of combinations, Chamberlain had Greener in trouble after just 30” and felled him with a series of hooks. The referee allowed the action to continue after administering the count, but not for long as the fight was all over after 54” of action. A brutal left hook to body unlocked the head shots once more, but this time the referee decided to wave the brutal beatdown off.

By registering the first victory in British boxing post-Lockdown Chamberlain has undoubtedly secured his place in the history books but, more importantly, he moves to an impressive 6-0 with 4 KO’s.

Next up was Daniel Dubois’ Heavyweight sparring partner Dorian Krasmaru, who would compete under the watchful eye of trainer Martin Bowers.

Early in the fight Dorian established his left lead hand with a mixture of long hooks and jabs, before opening up with right hooks as the round progressed. Opponent Phil Williams did fire back with a few jabs but ultimately failed to make his mark.

The second round opened with more solid work from Dorian behind his jab before a strong left hook backed up his opponent. Williams did land a jab of his own but an unphased Krasmaru continued to box smartly behind his lead hand.

As the round progressed it was a similar story as Krasmaru increased the volume of his punches, working the body and head. The pace seemed to tell on Williams as his hands started to drop, allowing Dorian to more easily ping his jab towards Williams head.

The third round was another conclusive victory for Dorian, as he continued his tidy work with both his lead and back hand. As his pace and precision continued to wear down his opponent, the holes began to show and by the end of the round Krasmaru was landing at will to Williams’ body.

Williams tried to spring a surprise in the 4th with a flurry at around the halfway point but the pace quickly became too much and, as he backed off, the final round finished with Williams’ trying to hold on.

Krasmaru got the 40-36 verdict and sees his record improve to 3-0 as a professional.

In the third fight of the night, WBO European Super Welterweight Champion Hamzah Sheeraz sought to defend his crown against Paul Kean.

In what looked set to be a cagey opener, Kean seemed happy to sit on the back foot but his plan went awry as a sweet right hand floored him at around 1’30” of the round. A spiteful Sheeraz began to work the body as the round came to a close, landing a jab to the body as the bell rang.

The second round saw Sheeraz immediately on the front foot and stalking Kean around the ring, using his jab effectively to maintain his dominance.

The third saw much of the same and, as the round progressed, Sheeraz began to flick his jab out with even more confidence, backing up his opponent and picking his power shots cleverly. Kean fired back on occasion but struggled to break the guard of Hamzah.

A quieter fourth round allowed Kean to do his best work of the fight, but Sheeraz came on strongly at the end of the round landing a series of punishing right hands.

Sheeraz switched it up a gear in a violent fifth round which saw him draw blood from his opponent. He started the round with an early combo of left hook to the body followed by a left uppercut to the head before repeating it once more, this time followed by a vicious straight right. The sixth round was much of the same with Sheeraz dominating from behind a stiff jab.

Kean’s corner would wisely decline to send their man back out for the seventh and Ilford’s Sheeraz would move to 11-0, 7KO’s and retain his WBO European title.

Heavyweight prospect David Adeleye approached the penultimate bout of the night with mean intent, landing a pair of brutal left hooks to the body that made his opponent Matt Gordon wince. Gordon saw the round out, but it was clear Adeleye was chasing a spectacular finish.

That finish would come in the second, as the ref waved it off late in the round. Early on, David opened up with a series of vicious combinations but Gordon would find a way back into the fight before Adeleye managed to land a series of straight rights and right uppercuts that saw his man off.

In the main event of the evening, Midland Super-Bantamweight’s Brad Foster and James Beech Jr. contested the British and Commonwealth titles.

In an all action first round, both men threw and landed with intent. The second was equally fast-paced and evenly contested, with Beech holding his own against the Champion.

In the third the fight was contested in close quarters, with both men willing to stand and trade. As the round progressed, Foster would switch his stance from orthodox to southpaw and started to see some success with short hooks to the body. As the third ended, Foster’s accuracy arguably saw him ahead but the fight was tantalisingly close.

Foster opened up a cut on Beech’s left eye at the start of the fourth and then proceeded to try and establish his strength as the round progressed. Beech did manage to land a stinging right hand at one point, but Foster returned with a flurry of punches.

A quieter fifth round gave way to a rough and tumble sixth with both men throwing a number of meaningful shots. Beech landed arguably the toughest shots of the round, at one point landing hard with a right hand through the middle.

Foster charged back in the seventh, landing a huge right hand of his own that drew blood from the nose of Beech. Another fiercely competitive round passed with the TV commentators struggling to separate the pair.

Fewer telling shots were landed in the eighth as the pace slowed, but Foster was able to land a strong left hook that was the most decisive shot of the round.

In the ninth round Foster was delivered a final warning for use of the head before rebounding with a series of big shots. Beech more than held his own though and the fight was still thrillingly close going into the tenth.

Beech’s corner was demanding he matched Fosters output at the start of the round, a rallying call he tried his best to meet in another fiercely competitive round that ebbed and flowed. Foster started strong but Beech grew into the round as the pace slowed.

A blood-and-thunder eleventh saw Foster up the pace once more, doing some lovely work on the inside and landing some eye-catching combinations. BT Sport’s pundits had Foster one round ahead going into the final round, but in a fight this close nothing was certain.

In the final round of boxing’s big comeback to British screens, Foster emerged with some venom in his punches and pushed Beech back almost immediately. Brad began to unload with a minute left on the clock, landing a terrific bodyshot and forcing Beech into the ropes. As the round wore down, Foster landed a trademark left hook as the final act in a fascinating fight that went to the judge’s scorecards.

After twelve rounds two judges had it 116-113, and one had it 117-111, for the winner and still the British and Commonwealth Super-Bantamweight Champion – Brad Foster.