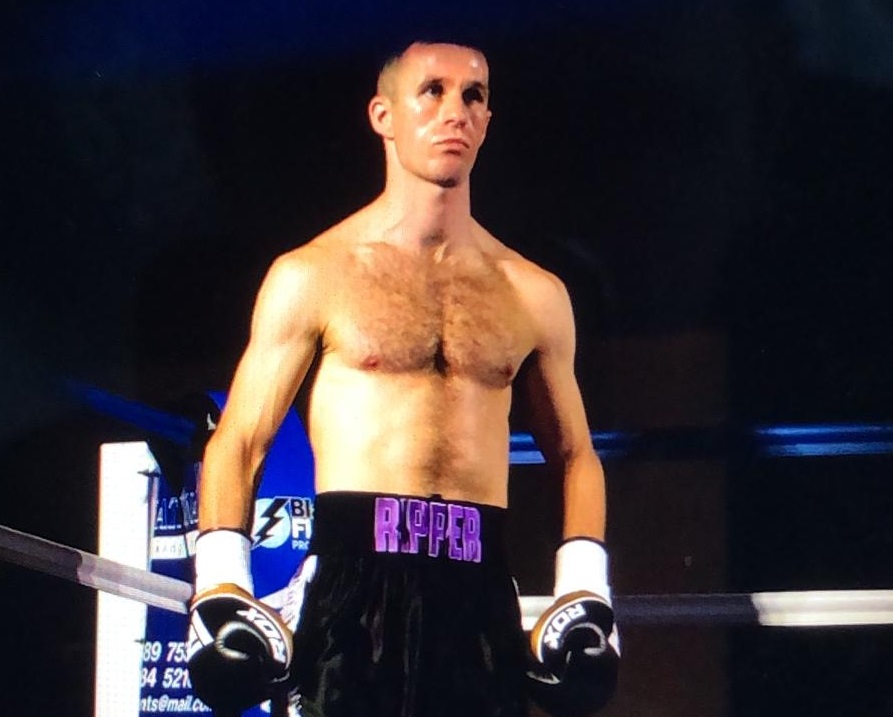 Trained by Paul Stevenson at the thriving Everton Red Triangle Gym in Liverpool, unbeaten welterweight, Jack ‘The Ripper’ McKinlay (2-0, 0KOs), has spent lockdown recovering from a hand injury sustained in his last fight.

The 30-year-old talent defeated ‘The Congo Leopard’ Michael Likalu (0-1) on points on February 28 at the Grand Central Hall in Liverpool on a Black Flash Promotions event.

His fearless opponent was one of the most enthused fighters coming out of the away corner that night and rallied hard to upset the home fighter, but McKinlay was technically better, landing more eye-catching shots to prevail on points.

However, McKinlay, who was an Under 20’s ABA champion, injured his right hand in the second round of the four-round contest.

He explained further, “There wasn’t any feeling out process, the lad came to win and we went at it from the first bell. He tried to put it on me and had a high work rate but I landed the cleaner shots.

“I felt my jab was landing well and I landed some solid right hands, but then I hurt my right hand in the second round.”

McKinlay suffered thereon from the hindered fist but managed to win 39-38 on the referee Jamie Kirkpatrick’s scorecard to move up to 2-0 within five months of his pro debut back in September 2019.

“Yeah, I enjoyed that fight,” he reflected. “I got off to a good start to the year but because I hurt my hand, lockdown actually came at a good time for me to give me chance to rest my hand, so it wasn’t a bad thing for me at first, in my position.”

Then Prime Minister Boris Johnson declared a state of lockdown towards the end of March, which Jack spent the first couple of weeks off from training, but very quickly got back into it to keep close to his fighting weight on the advice of his trainer, Paul Stevenson.

“Yeah, the first couple of weeks of lockdown, I had nothing to aim for, but I feel better now. I couldn’t do much punching anyway because of my hand.

“I’ve been training quite a bit to be honest, I’ve been doing loads of cycling. I already had a bike before all this, but never really used it until now, but I’ve been going on two-and-a-half-hour bike rides.

“I’ve got punch bag in the back and been doing pads with my mate. I’ve been running with a heavy rucksack on my back with my mate who is ex-army.

“A lot of people can’t wait to get back to the gym, but I’ve found that you can use what’s around you. During my last fight camp, I was mixing it up because I don’t like doing one thing all the time, as it gets repetitive.

“Whenever we get back in the gym, I’ll just take it as it comes. My hand is still not 100 per cent but been getting better, and I’ve been doing light pads, but not too heavy punching.”

Despite having no fight date to focus on, or even the daily visit to the gym to look forward to, ‘The Ripper’ is still managing to keep himself motivated.

“I’ve been waking up earlier than normal because when you’re in training camp, your body is sore and it is hard to get out of bed sometimes, but now the training is not as intense, I’ve been getting up nice and early.

“When I wake up, I don’t have a set routine, I just do whatever training I feel like that day, to be honest.”

Although Jack’s good start to the year has since been thwarted, he remains positive that 2020 could still have a bit of hope ahead.

“I’ll be happy to just get one fight in,” he shrugged. “I’d like to end the year on a win, although two fights would be great, but realistically, just to fight once more this year would be good. It’s out of my hands though, so just got to go with the flow.

“It’s going to be hard selling tickets, but it’s not about the money, even if we fight for nothing for a few fights because I think it will be hard to sell tickets after this, people want to spend their money wisely because you never know what’s around the corner. But could go the other way, because people are desperate for a night out!”

McKinlay trains at the century-old Everton Red Triangle Gym in Liverpool with six other unbeaten teammates. One of the UK’s brightest prospects, European and Commonwealth gold medalist Peter McGrail, who was the last Briton to qualify for the 2020 Olympics, also trains there.

The gym is well known in the amateur code but has yet to receive the same recognition in the professional ranks, despite Kevin Satchell winning British, Commonwealth and European flyweight titles when he trained there, retiring unbeaten in 2016.

McKinlay was victorious in 26 from 32 amateur fights and won the ABA Under 20’s national title, all while wearing the famous red ERT vest.

He said, “I think the boxing insiders know all about the Triangle, the people in the know already know about our gym and it’s talent.

“We’re just under the radar, but not out of sight, if that makes sense. Everyone knows about us, but we are just waiting for that big break, I think we need for someone to win another pro title. I certainly don’t think people don’t recognise us, but it just takes time to be famously recognised.

“I think it works well in our favour though – no distractions, just pure training. Maybe that’s a good thing, it’s just business and keeps your eye on it, and that’s all that matters.”

Everton Red Triangle Gym, in association with Black Flash Promotions, plan their entire year’s events ahead. Unfortunately, due to the pandemic and subsequent ban on all boxing events under the jurisdiction of the BBBofC, May and July’s events were cancelled. The remaining planned dates are September 5 and November 14.

0 comments on “JACK MCKINLAY REVEALS WHY LOCKDOWN ARRIVED AT THE PERFECT TIME FOR HIM!”