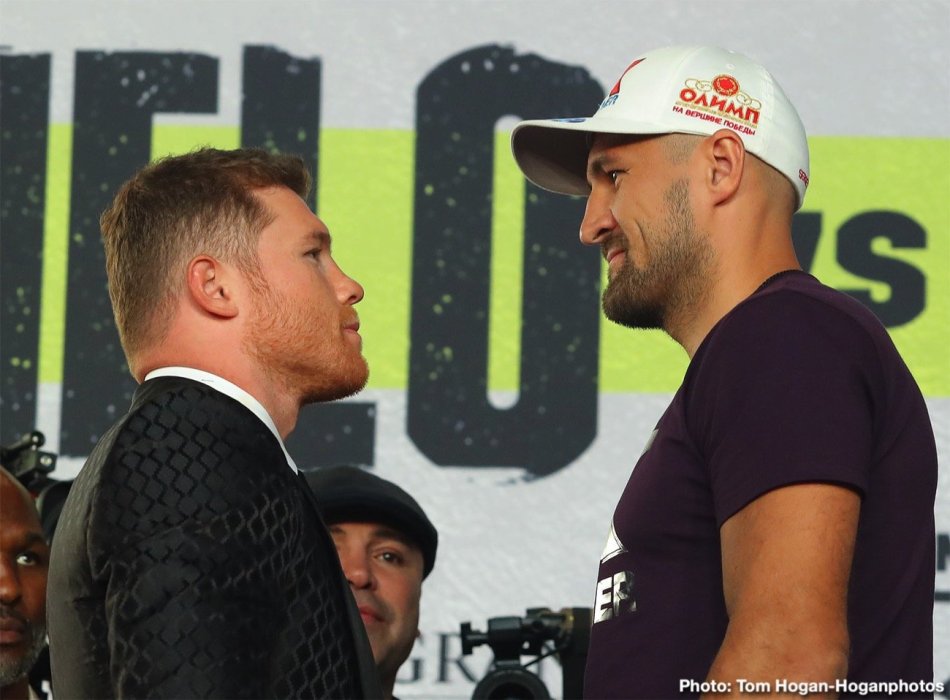 “I’m very grateful to all the fans as always. I’m very motivated here, it’s an honor for me to share the ring with a fighter like Kovalev who I met in 2012. Now we’re about to make history. I know it’s going to be the most difficult fight of my professional career. I will give the best I have in the ring and that day we can yell “Viva Mexico.”

“I’m very happy to be here back in Los Angeles. Thanks to God and thanks to Canelo and his team for making this opportunity to get this fight. I think this is a big test for me in my boxing career because this is one of the best fighters in the world in boxing right now. I’m happy and I am excited. Thank you very much for the support.”

“Thank you to Golden Boy and DAZN – this was a very difficult fight to make happen but the fight is now here. Only the big fighters and those that leave a footprint become these type of fighters. We know Kovalev well and we know the challenge that we are facing. He’s a great fighter that leaves everything in the ring and in one punch, he could end the fight. And we know it’s going to be a great challenge. We want Saul to be a champion in four weight classes,.”

“I’m nostalgic and cannot help but remember the beginnings of all this. To look back and see everything-all the victories that Saul has given myself and my son, and the future victories, makes me happy. The Reynosos have been with Saul for over 15 years-ever since he was a child. We trust that he will gain victory here.”

“Both these guys are true champions. Canelo, I’ve always admired you. Your trainers did a great job with you. I gotta admit that. I really take my hat off to you for having the balls for taking a step up and not having a catch weight and stepping up to the challenge. Sergey, I love you to death, I respect you for accepting the challenge. In all honestly, the only losers on November 2 are the people who don’t want the fight or come to the fight.”

“I don’t think this fight needs to be introduced. When you hear the names Canelo Alvarez, Krusher Kovalev, it says all that’s going to happen on November 2. I don’t need to talk about Sergey – everybody knows who he is in boxing, and regarding Canelo, they know what they mean when they say – grandes kajones.”

“Canelo hopes to become the fourth Mexican to win a world title in four divisions, with the only other ones being Erik Morales, Juan Manuel Marquez and Jorge Arce. One big difference is that Canelo is at a higher weight class. And this opens the possibility for many more matchups, and bigger opponents with strong punching and star power. When talking with Canelo about his career goals, he said he wanted to make history, and fight the best. This is why we had to be very strategic and thoughtful in planning out his next fight and while it may have taken a bit longer than we wanted, we know that it was worth the wait.

Canelo has been preparing for this moment and we know that on Nov. 2 he’ll write a new chapter in boxing history by becoming the second Mexican ever to win a world title in the 175-pound division (Light Heavyweight). Together with DAZN, we’re committed to making boxing more accessible and affordable by giving fans the best fights – without the price tag of pay-per-view. Historic fights are a hallmark of this company and Golden Boy continues to deliver the biggest fights of the year. November 2 will be no exception, and we expect a great performance by our champion, Canelo Alvarez, as he becomes the new WBO Light Heavyweight World Champion.”

“I’m happy to announce that with a major bout like this one, the fans deserve the best undercard possible. Our next big major star in the making, Ryan Garcia, will be fighting in Las Vegas. He’s fighting Duno-it’s a fight the fans wanted and it’s going to be a tough fight.”

“I know a little bit about history. And for Canelo to take a big leap from 160 to 175, to dare to be great, to make history, anyone that’s not educated in boxing history, wouldn’t know what I’m talking about right now. But just in case you want to learn because it’s never too late, it’s very historic to be in the position of Canelo. And to bite off challenges and challenge himself and dare to be great to make history. As Oscar said, not only Mexican history, but also boxing history. There’s very few fighters who have accomplished 160 to 175 and been successful. As you know, you’re standing and hearing from one right now.

I have a personal feeling about making history because I’ve been there and done that and now it’s Canelo’s time. I understand what it’s like to be in there with the Krusher. He earned that and I respect that and I respect that to this day. Enjoy this historic fight and watch Canelo Alvarez – who I call the Evil Knievel in boxing – who’s taken on the best so far and is now taking on the best at light heavyweight.”

“I want to give special thanks to Sergey Kovalev and Canelo Alvarez – as a lifelong boxing fan, not just as a promoter. Unfortunately, sometime around the turn of the last century, boxing began to lose its way. Instead of building a legacy, avoiding unnecessary risk became the goal and to this day, some fighters are praised for it. Competitions suffer because of that. When we first met, Sergey was so adamant that he wanted to test his skills against the very best. He wanted to find out how good he really was.

Canelo, you may have bit off more than you can chew, but that’s okay. Great fighters are not afraid to challenge themselves. And win or lose, history will reward you for taking a risk.

Congratulations Ryan, you will not be the only spectacular young fighter on the card that night, because also sharing that ring is another intelligent, well-spoken, absolutely fantastic young fighter – his name is Evan Holyfield. And he is the son of the great Evander Holyfield. I can’t tell you how grateful I am to work with Evander’s son after all these years. You’re all going to see him and meet him, and I think you will all be thrilled.”

“I want to thank the fans for coming out because it’s a weekday, you guys didn’t need to come here. Thank you guys for coming. I’m excited. The co-main event on the biggest card of the year. I’m so honored. It’s a big night. I get to fight the guy I wanted to fight most, Romero Duno. They all said I was scared and I was worried about him and now I have the chance to get my respect and show everyone I’m a real fighter. Everybody stay tuned. It’s going to be a big fight. Thank you to everybody for believing in me and thank you to Golden Boy for getting the job done. Let’s make history.”

“In one year’s time, I believe we’ve managed to assemble the best schedule in the history of boxing. Let’s just look where we are: Canelo vs. Kovalev – boxing’s biggest star jumping up two weight classes; Ruiz vs. Joshua II – the rematch of the biggest heavyweight upset in some year; KSI vs. Logan Paul, bringing millions of new fans to the sport of boxing; GGG, back in title contention from MSG; the list goes on for DAZN. To our subscribers, you’re in for a tremendous end to 2019 and tremendous year to come.”