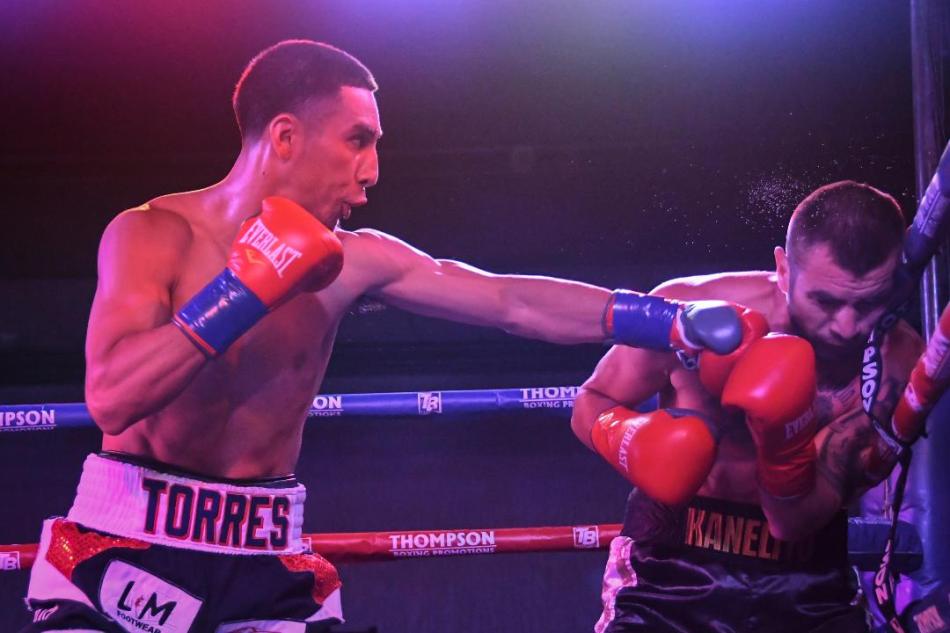 It was time again for another Thompson Boxing Promotions event, New Blood this time, held at the Doubletree Hotel in Ontario CA. The main event of the evening was between junior welterweights Ruben Torres (10-0, 8 KOs) going up against Ruben Tamayo (27-14-4, 18 KOs). This fight was scheduled to go eight rounds. Left hands were the order of the day for Torres.

In the opening seconds of the first round a quick little left hand put Tamayo on the canvas. Very shortly thereafter, a little flurry of punches put him down again. But he was able to withstand the round.

In the second another left put Tamayo down for the third time in the fight, and very shortly after that he was knocked down and counted out by, you guessed it, a hard left hand. The time of the stoppage was 2:38 of round two.

It was time for the lightweights, and this was the co-main event. In a bout scheduled to go six rounds, Anthony Sanchez (9-1-1, 9 KOs) faced off against James Early (4-3). There was not a lot of real action in the first round and neither man really took control. Early landed quite a few punches near the end of the round, as his right hand was working well for him.

This continued for James in the third. His right hand was still successful, and even though he often seemed to just paw it out there, he was still able to land it with power, both to the head and body of Sanchez. At the halfway point now, and Anthony does not look like an undefeated fighter thus far and doesn’t look like his paper record. Sanchez did land some punches, but they were not as crisp as one might expect.

The fifth saw quite a few misses, mainly by Sanchez. We moved into the sixth and final. This was the best round for Anthony. He came out hot and really tried to work. Early had the power shots in the fight, but could sometimes look wild. Both men missed, but Anthony had more misses than James. We went to the scorecards. The judges saw it 59-55 twice, and 58-56 once, for James Early. This also marked the first loss for Sanchez.

Leo Ruiz (5-0, 3 KOs) stepped into the ring opposite Donnis Reed (3-4, 2 KOs). This fight was scheduled for six rounds in the junior middleweight division. There were not a lot of punches thrown in this first round, but the ones these two did put out there landed often and with power. Near the end of the second round Ruiz was all over Reed, so much so that when the bell rang, he wobbled a bit headed back to his corner.

In the third Ruiz took over where he left off. While Reed did not go down, referee Ray Corona called a knock down when the ropes kept Donnis up. A few seconds later, Corona wisely called a halt to the contest. The time was :42 seconds of the third round.

Featherweights took to the ring in a fight scheduled to go four rounds, as we saw Jose Tito Sanchez (4-0, 3 KOs) going up against Luis Montellano (1-6-2, 1 KO). These two had a good opening round, with each man scoring points with accurate punches. The second three minutes were action-packed, with Sanchez really landing a lot of leather on Montellano. He had him on the ropes for most of the round while he delivered his punishments.

In the third Jose continued with his torture of Luis. He was hitting him everywhere. Montellano was a tough kid and would try to fight back when he could, but he was really getting nailed. At the 10-second warning, a barrage of punches put Luis on the canvas. He got up as the bell rang ending the round. In the fourth and final round, referee Jerry Cantu thought Montellano had taken enough punishment and waved the fight off at 1:18.

In our opening bout we saw Chris Crowley (1-0-1) facing off against Braulio Avila (2-4) in a super featherweight fight that was scheduled for four rounds. As to be expected in a fight this short, both men came out firing. Crowley landed some good punches, but midway through the match Avila scored with a huge right hand. In the second round, Braulio landed a few more good right hands, but Chris had a flurry of really hard punches that rocked Avila.

In the third there seemed to be as much holding as there was punching. Both men seemed a bit tired. We move into the fourth and final, and Chris came out on the attack. He landed hard punches throughout the round but was not able to finish off his opponent. We went to the scorecards. The judges had it 39-37 twice, and 40-36 once, all for Crowley. He gets his first victory.

This was a pretty short night at Doubletree, and the obvious star of the show was Ruben Torres. James Early also gave a winning performance that probably surprised a lot of people. Don’t let his record fool you. This young man has the goods and the determination, and now just needs experience and polish.