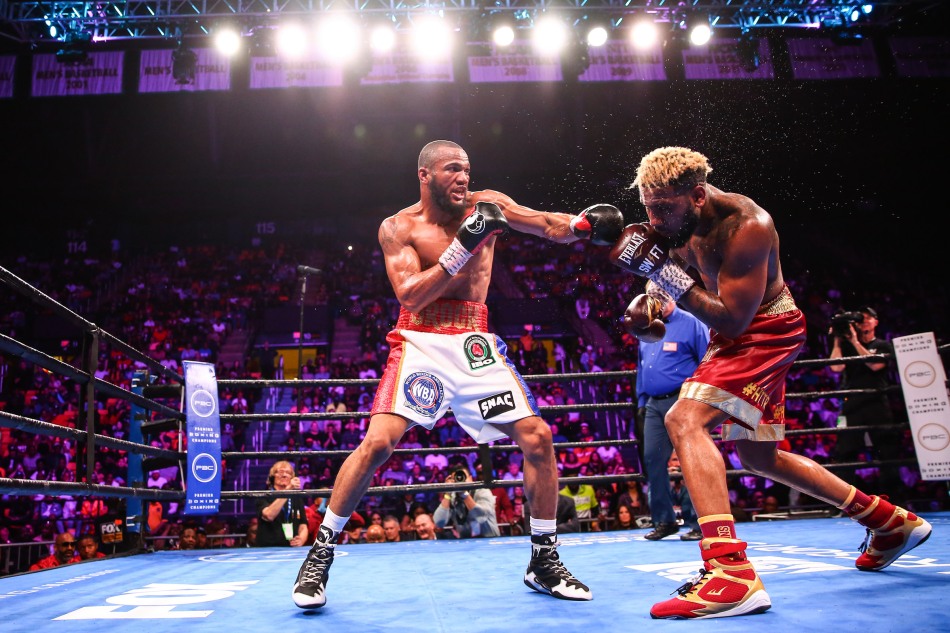 We associate the word ‘Bully’ with a bad-tempered, anti-social individual so with that being said the headline of this article is somewhat misleading, more so the point I am trying to make is not that the fighter in question, Jarrett Hurd is a disliked fighter, far from it but is more so in the way he uses size to overwhelm opposition, its been that way since his professional debut, it goes without saying that it’s extraordinary how he manages to fit his frame into the 154-Pound weight class but whatever the wizardry it certainly has worked for him or should that say until Saturday night.

Once beaten Julian ‘J-Rock’ Williams came into the contest looking to gate crash the homecoming party of the hometown hero. the challenger always had potential even as an amateur but strangely would never go on to capture a national title, two years prior to Saturday night, he would be again found wanting when handed defeat by Jermell Charlo with suggestion from some that his professional career would culminate the same way his amateur career did, a lot of potential but no end product.

How wrong those people were, with tears in his eyes coming off a brilliant display of boxing, he stood up to the divisions bully and came out on top, realising the dream that had stayed with him since a 12-year old boy.

“This is a dream come true. I have been waiting for this for years,” Williams said. “I never ditched the gym. I never got into girls or left the gym. I am from the streets, but I was never in the streets. I was in the gym practising my craft. The only people that believed in me were my team, but all I can say is, ‘and the new!’”

DEJU VU FOR VARGAS AND DOGBOE

Elsewhere there were two eagerly anticipated rematches taking place, both of which ended the same way as the first, via stoppages.

WBC Super Featherweight champion Miguel Berchelt and WBO Super Bantamweight holder Emanuel Navarrete proved their point by beating former champions Francisco Vargas and Isaac Dogboe respectively, showing that the previous victory was in no way a fluke, in successful defences of their titles, both challengers left to bow before their king.

Although both results were expected, they still left us enthralled at the participation from each, as they put on a spectacle with the recouping of attendance fees from the watching public.

At this point it wouldn’t be a Miguel Berchelt fight if it didn’t take the form of a rock em sock em robots kind of scenario, both he and his dance partner for the night in Vargas, who I might add is also no stranger to a fight of the year contender or two, left us all on the edge of our seats with a fistic celebration for our eyes.

A toe to toe war was inevitable, so too was the punch count that would have given the guys at Compubox an head-scratcher of a time in recording the punches thrown/landed etc, Vargas from the outset was outgunned, tried as he might to turn the tide but on this occasion he was bringing a water pistol to a gunfight, his peppered shots unable to break the tough exterior of the champion. Berchelt, on the other hand, would land hard hooks to the head and body throughout, leaving a battered and bruised challenger in his wake as he remained the champion via six round stoppage.

Isaac Dogboe suffered a similar feat in his rematch with Emanuel Navarrete, the Ghanian looked small in comparison and was unable to bridge the physical advantages of the champion who broke him down for round after round until the last round siege, acting to put him on the canvas for the last time in the contest, Navarette showed that he is here to stay, putting the rest of the division on high alert as he called each of the divisions champions out.

We sadly end this weeks #MyTake on a sour note, paying our respects to the passing of two of boxing’s great characters in former Heavyweight contender Bert Cooper and HBO’s unofficial judge Harold Lederman.

Cooper may not have been able to capture a world title in his long career but he won a lot of hearts along the way with his power and determination, The man who would be known as the first to drop the teak-tough Evander Holyfield whilst also putting Michael Moorer on the seat of his pants twice will be fondly remembered and greatly lost.

It was a tough pill to swallow for the boxing community made difficult still as we were also made aware that Harold Lederman had also left this realm to join the greats of the past.

It is with a smile on my face that I remember Harold in particular, a long time Twitter follower of ours who I had the privilege to engage in debate about his feelings on the latest fight or one from before my time as he would recite his feelings in detail, Incredibly knowledgable with a kindness that wasn’t lost on myself.

Until Next week, Thank you for taking the time out of your busy schedules to read my ramblings as we now look towards to another great weekend of action.