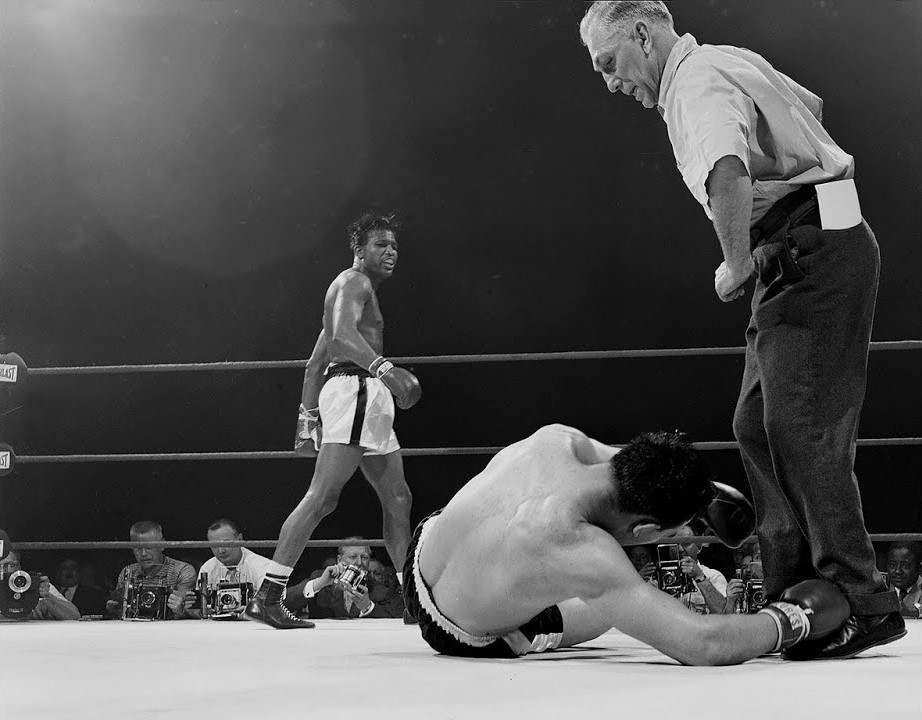 Paul J Daley – The greatest punch that has ever been thrown was one that I still long to have witnessed live but have replayed so many times that it is literally etched into my mindset whenever the subject arises.

Sugar Ray Robinson, in my opinion, was the greatest man to ever lace a pair of boxing gloves proving the point true countless times throughout his career but again in my opinion is also one that owns the distinction of landing one of boxing’s greatest knockouts.

It occurred the night of May 1st 1957 in a rematch with Gene Fullmer, an incredibly tough/rugged individual who until the time of his retirement in 1963 was stopped just twice in a career that spanned 64 contests.

Sugar Ray Robinson came into the bout on the back of a decision loss to Fullmer, a surprise to many with Robinson being the 6-5 favourite but the odds were reversed for the rematch with Fullmer being this time entering the contest as a 3 1/2-1 favourite.

Fullmer was ahead on the scorecards by scores of 19-18 before Robinson opened the opportunity for a scintillating left hook courtesy of two right hands to the body which dropped Fullmer in a daze, Fullmer tried in vain to find his feet but upon perching himself on to his knee, fell face first, enough indication for Robinson to know it had sealed the deal, it was a punch which Robinson would claim to be the most perfect of his career.

Lee Thornton – Looking back at some great knockouts over the years, I chose to write about a 2014 fight between Darnell Boone and Dionisio Miranda which featured one of the best right-hand knockouts I have ever seen.

Boone a true throwback boxer willing to challenge the best at any time has made a career off giving top talent many issues. Boone hurt Andre Ward, Sergey Kovalev and stopped Adonis Stevenson handing him his first career loss, making Boone a nightmare to face.

In Boone’s fight with Miranda, he set up the finishing combination with a jab to the head and then changed levels landing a double jab to the body finished with a short right hand to jaw causing Miranda to crash face first on the canvas violently. Boone again showed the boxing world why he is never given a full training camp against other prospects and elite fighters.

Dean Berks – Whilst I appreciate the fine skills of so many practitioners of our great sport, I plainly and simply love punchers. Not sluggers or brawlers, but pure world class punchers that deliver their blows with textbook precision, in particular, left hookers.

Over the last 33 years, I have seen some astonishing knockouts, especially when looking further back into boxing history. Two stand out for me Bob Foster vs Dick Tiger and Mike McCallum vs Donald Curry. When Foster thudded his monstrous hook into Tiger’s jaw the effect was instant, Tiger folding to the canvas, his senses in another orbit. But McCallum’s knockout of Curry was just picturesque.

For four rounds the pair put on a visual display of a “how to box” manual. Superb technique flowed from both men, underlying the high esteem that they held from the boxing fraternity. Then in round five, Curry committed a cardinal sin by pulling back with his hands low. Instantaneously, McCallum stepped in with a big left hook, the blow landing perfectly on the point of Curry’s now unguarded chin. He soared to the canvas, flat on his back with his arms perched beside his head like he was posing for a photo. His eyes glazed as instinct alone hauled him off the canvas and into the arms of referee Richard Steele. It still to this day is a thing of beauty.

Steve Haigh – History has provided us with plenty of memorable moments. Rocky Marciano lining up Walcott on the ropes for the ‘Suzie Q’ straight right, the low left hook from Ray Robinson which separated Gene Fulmer from his senses, Thomas Hearns second round destruction of Roberto Duran, Julian Jackson’s demolition of Herol Graham with a solitary blow when 4 rounds behind, the Sergio Martinez overhand left that turned out the lights of Paul Williams in their rematch…Endless examples.

My most memorable despite all the legendary examples is Juan Manuel Marquez one-punch finish of Manny Pacquiao.

The trained eye could see that Nacho and Marquez had religiously implemented this strategy in camp and fully expected Pacquiao to lunge in off the angles with rapier shots and it paid off with precision timing putting an end to the Mexicans turmoil of being left feeling short-changed by judges on several occasions. A brilliant overhand right that nobody will ever forget and a punch that left the much loved Filipino face down unconscious.

Jamie Bourne – Personally, I wanted to go with Sugar Ray Robinson’s thunderous knockout of Gene Fullmer. If we are choosing the greatest punch ever thrown, Robinson’s left-hook was simply the most fluid and precise shot I have ever witnessed.

There are a number of intangibles that make the knockout so impressive. Firstly, Robinson recognising that when he attacks the body with the right, Fullmer looks to return the favour with one of his own. After noticing this pattern, he plants his feet and feints with the right, exploiting the opening and firing a beautiful short left-hook that would leave Fullmer scrambling on the canvas.

However, I expected a number of my counterparts to also opt for this as their number one pick, which has made me alter my selection and instead choose one of the most iconic punches in history. When I was first introduced to the sport at a young age, I remember flicking through old books with pictures of classic fights from the 1950s. The picture that immediately captivated my attention was the image of Rocky Marciano delivering a bone-crushing right-hand to the jaw of Jersey Joe Walcott, leaving his face completely mangled and forcing the champion to drop to his knees, while his arms lay draped helplessly over the ropes.

This punch proved to be the deciding blow in the fight and would crown Marciano as the new world heavyweight champion. As an avid follower of the sport, the image of Marciano reconstructing Walcott’s face serves as one of my earliest boxing memories and remains one of the most destructive one-punch knockouts of all-time.

Jonathan Harris – The perfect punch, in a world where millions of punches are thrown with bad intentions week in week out. Its a pretty daunting task to a find the “perfect” one, the more I played over in my mind the punches that have really stuck out to me over the years, I realised that in this case, the term perfect came in many different varieties, we look at things in perspective, what is beautiful to one could be merciless to another, the mob is fickle and the term “perfect” is very exquisite.

When you think of fighters who could make the category, many would maybe devour the thought of huge punches or knockout artists with likes of Julian Jackson, Mike Tyson or Tommy Morrison. My settlement, in the end, came down to a lesser likely prizefighter who’s one single punch has always been at the top of my list as one of the most complete shot I have ever seen.

It was November 20th 2010, revenge was a scent in the air drifting through Boardwalk hall, after the controversial first fight this fight was Built up to be “fight of the year” but turned out to be potentially punch of the century!
Paul “The Punisher” Williams V Sergio Martinez

The fight started off very quickly, both fighters showing exciting potential to make the fight what it was anticipated to be, when the bell sounds and both fighters come out to test each other’s will, no fan was ready for what was about to unfold.

Paul Williams walks forward with confidence after having some success with a long well-timed jab, and gets met by the devil! The thud echoes across the arena like the kick of a shotgun and the stone chinned Williams kisses the canvas.

This shot for me is the perfect punch, as Williams walks in, for that split 3 seconds or so the southpaw Maravilla quickly shuffles his feet into position, lines up Williams with a snipers eye, moves slightly to his right, which enables his left hand to be more in line with Williams and throws an absolutely devastating over hand that lands flush onto his normally iron-chinned opponent!

One of the great things I took from this shot was the timing, in boxing timing is everything and here is where the phrase perfect really comes into play.

The next thing you will notice, Martinez does not follow up with another shot, no does he anticipate that anything will be coming back. As soon as the blow lands he knows that is all he needed to do, as a matter of fact, Martinez walks away calmly like a 20’s gangster after lighting a match. Without even taking a second glace at his fallen opponent, Martinez must have felt the bones of the Punisher shaking all through his glove.

“Perfectionism is adaptive if you are mindful of your humanhood”

Barry Richardson – I couldn’t decide between two, the first being Julian Jackson knockout of Herol Graham that witnessed Jackson being totally schooled through four rounds and even under a barrage from Graham at the time of the KO, Jackson’s hands tight peekaboo style but able to deliver, a short right hook from a few inches, BOOM goodnight ‘The Bomber’.

The second one would be Mickey Ward’s knockout of Alfonso Sanchez, a similar story to the fight as the above, Ward getting beaten up pretty bad through seven and then toward the end of the round delivering a kidney punch that floors and knocks out Sanchez.

The punch was perfect for a few reasons, (1) the punch itself was as perfect as you will find (although Hatton may have something to say about that) – (2) he tapped the same spot just before the big shot landed so as to take the attention away and (3) It was just as Roy Jones Jr and Larry Merchant were saying how poor Ward was and everyone should ask for their money back..  Ha brilliant.