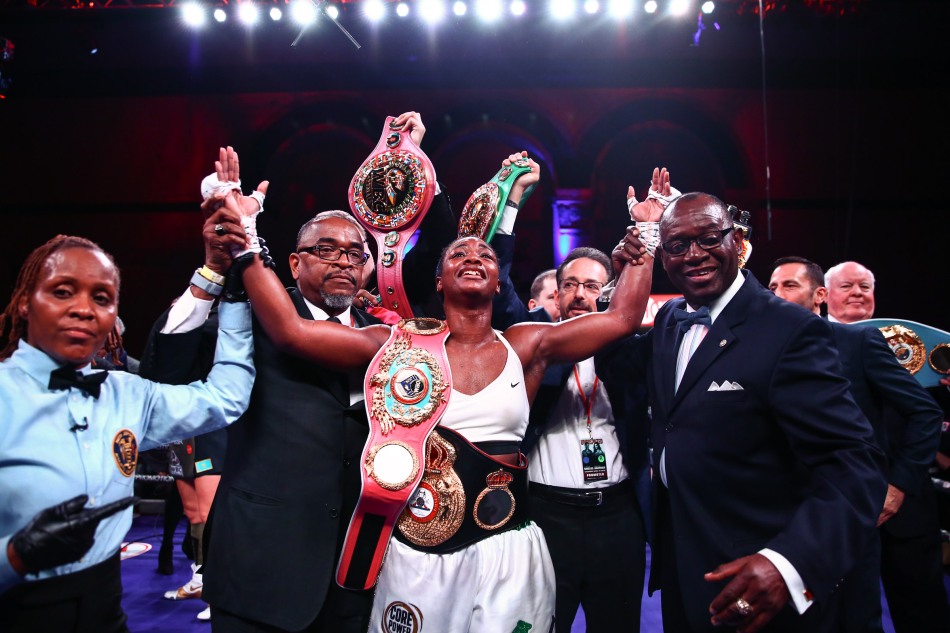 Even before the realization of the fact, Cassius Clay / Muhammad Ali’s self assured proclamation to being the ‘Greatest’ at the time of its infancy left many questioning his faculties, branding him brash or arrogant, unable to see the full picture, the one he had already laid out for himself, fast forward to his retirement stands a man who seemly extinguished a lot of the doubts surrounding his many boasts through the years, so when Claressa Shields banged the drum to sound out her belief of being the best female ever, personally it brought similarities of what I had heard Ali proclaim previous.

Like Ali, she embarks on a journey of proving her point, which went further on Saturday night witnessing her impressively hand out a one-sided beat down to Christina Hammer.

Personally, I cannot overstate how much I love confidence in fighters which is what initially attracted me to the realm of Roy Jones Jr, but as is often the case it can be misconstrued as arrogance which in the case of Clarissa left many on social media to judge her comments with condemnation.

The argument put forward from the self proclaimed ‘GWOAT’ is that she holds in her possession Two Gold Olympic Medals, the first American boxer female or male to win them consecutively plus also holds two World championship honours bestowed to her before taking the dominance to the paid ranks, she has since gone on to capture world titles at Super Middleweight before annotating herself the queen of the Middleweights which is Undisputed, It’s fair to say she as the right to call herself the greatest.

Along of course with a select few who also lend their hand to the argument. Time will give us the answers that we seek in this instance.

A ROBBERY REPORTED IN MEXICO

It seems that Bad judging isn’t afforded only to Canelo’s opposition, once again raising its ugly head to hand Jamie Manguia a gift on Saturday night, doesn’t need me to state the fact it doesn’t look good for Goldenboy Promotions who are again courting controversy.

Dennis Hogan was the unlucky recipient of a hometown decision that left a bad taste in the mouths of all who witnessed what should have been the coronation of a new champion.

All personnel around ringside scored the fight in favour of the Irish born Australian resident, even DAZN whose network showcased the contest scored it in favour of the challenger but the judges, unfortunately, decided to try a different tact to the tried and tested of scoring on merit, maybe more promoters should invest more time in the wining and dining of judges or did I just cross the line?

You have to really feel not just for Hogan but also his team who’s trainer, in particular, was left in tears reflecting back in the knowledge of the preparation that had been undertaken to outbox the much fancied Manguia.

LOMA DANCES TO HIS OWN TUNE

I would wager Ukraine dance classes are full to overflowing of young impressionable combatants looking to emulate the footwork and balance of the great Vasyl Lomachenko.

It was on show again this past Friday, effortlessly stepping around the sporadic throwing of his challenger Anthony Crolla on route to his stoppage victory. It was a performance of beauty, one which you could sit your son/daughter in front of to witness how boxing is done correctly at the peak of one’s powers.

In conclusion to the fights ending, It now becomes a case of who could give him a contest more so than the alternative of could hand him the second defeat of his career, to that extent there are slim pickings with Mikey Garcia heading up the thinned out queue.

One to watch, Christopher Colbert or ‘lil B-Hop’ if you would like to use the nickname he goes by, again impressed in his quick demise of Mario Briones.

The quick-handed speedster mirrors that of a fighter who will soon make strides through the ranks, whereas there aren’t many at the moment as exciting as the Brooklynite.

Until next week thank you for checking out #MyTake as we look forward to another weekend of great action.