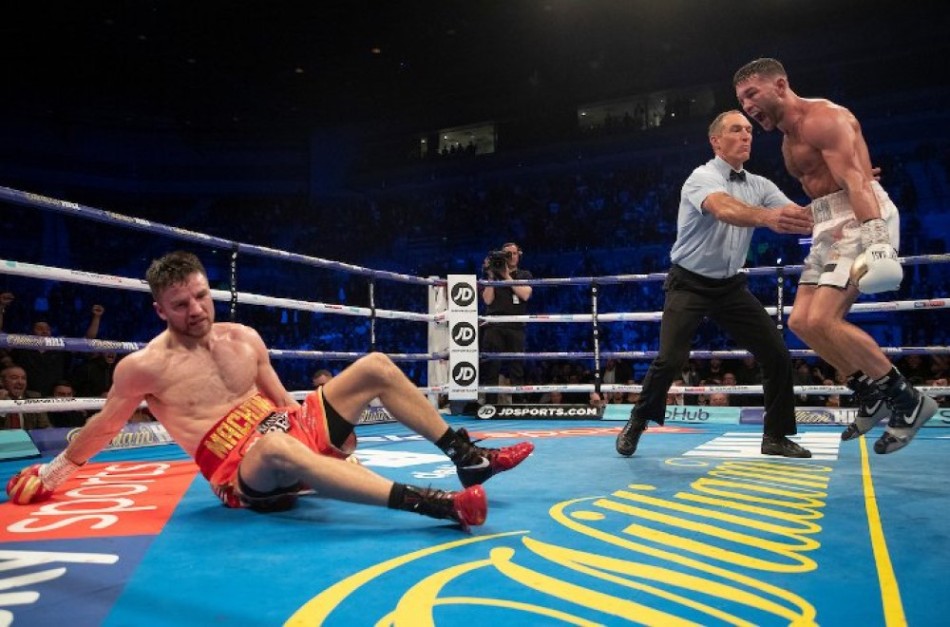 Respect is earned, never given which is a sentiment that was on display on Saturday night between known enemies Anthony Fowler and Scott Fitzgerald.

Beforehand it was a slur of tweets aimed at the other that snowballed into a fight with each set out to prove his point correct. It resulted in an enthralling contest with all the ebbs and flows of an early candidate for fight of the year, both were hurt throughout, pride keeping each of them upright until a lapse in concentration allowed Fitzgerald to get a valuable knockdown in the tenth.

Before that Fowler with the better pedigree of coming through the GB amateur setup, was out to prove his better learning as a pro as he marched into the centre of the ring, using a solid jab to offset the ‘Mad Mans’ offence.

As the fight wore on, Fitzgerald seemed to be the glitch in the machine, his movement able to dictate the pace of the fight before his own jab came into its own, the effects of which could be seen on the face of the Liverpudlian.

Like Custer’s Last Stand, Fowler seemed to be losing grasp of the impetus of the contest before a big uppercut landed, serving its purpose to rock Fitzgerald so much so that a barrage of shots commenced thereafter, I sit here now unable to offer reasoning of how he stayed upright, but he did, not only that but came back in the next round to drop Fowler basically putting a bow around his careers biggest prize.

Around ringside regardless of the knockdown, some had Fowler up but I’m glad to report that two of the three judges scored it correctly for the winner and new WBA International champion, the fall out of which could lead to a boom in the division in the year or two to follow.

I don’t know if it was a case of Training camp being a little too stringent in regards to nutrition but Kash Ali certainly wanted to get his teeth into something, unfortunately for his opponent David Price it just happened to be his stomach, leaving the bemused referee to disqualify him for doing so.

It was a strange ending because although Price had landed the better of the two, once again he started to show signs of fatigue that could have potentially seen the fight tip in the balance of Ali, we will now never know

The act will cost Ali his $26,000 fight purse plus will have to explain himself in front of a BBBoC panel facing a lengthy suspension.

GVOZDYK PUTS A NAIL IN THE COFFIN OF NGUMBU’S CHALLENGE

Kash Ali vs. David Price took the honours of being the strangest finish to a contest this past weekend but not far behind was the contest of Oleksandr “The Nail” Gvozdyk who won via a non-contact TKO after his opponent Doudou Ngumbu apparently injured his calf in the fifth.

Gvozdyk was well on top at the time of the contest’s end but was dismayed that he wasn’t able to stop the Frenchman himself, the way in which has seen him stop 14 of his 17 opponents in the past.null

Ray Robinson may have slightly derailed Bob Arums plans of keeping the competition for Terence Crawford in house as his most viable option was given a scare on Saturday night, barely leaving Philadelphia with his lossless record in tact as Egidjius Kavaliauskas had to settle for a draw.

I originally had Robinson winning the fight but on reflection have since scored it for Kavaliauskas.

“I won the fight, and I won it clearly,” Kavaliauskas said afterwards. “The judges did not agree, and I can’t control what fight they were watching. I still want to fight for a world title because I consider this fight a victory. I am still undefeated, and I know I can beat all of the champions in the welterweight division.”

It was believed that Top Rank had decided to use the Southpaw Robinson in readiness of matching Kavaliauskas with Crawford due to his statue of both being around the same height as well as the matching of fighting stance (Crawford is orthodox but fights mostly out of southpaw).

That fight may still be on the table but without the intrigue perhaps as it once held.

All in all it was a packed weekend of action, as I slip away to watch the contest of Fitzgerald Vs. Fowler for the fourth time, until next week thank you for checking out #MyTake as we look forward to another weekend of great action.

0 comments on “MY TAKE | BITES, BRAWLS AND CONTROVERSY”