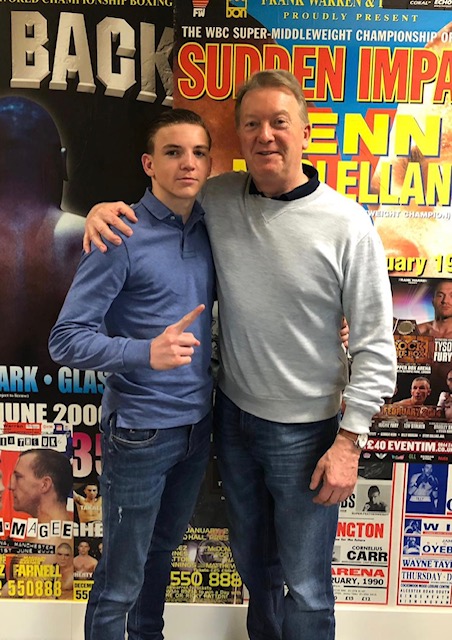 FRANK WARREN IS delighted to announce that outstanding amateur talent Dennis McCann has signed a promotional contract to turn professional with Queensberry Promotions.

The much sought after 18-year-old will be trained by Alan Smith out of the iBox Gym in Bromley and will be managed by MTK Global.

The Maidstone-based McCann will fulfil his dream of becoming a professional boxer following his departure from a highly successful stint in the amateur code and news on his debut date will follow shortly.

The nine-time national champion has won an array of further titles in amassing an amateur record of 50-4, with 16 wins coming via stoppage.

“I got picked for the European championships in September, but chose not to go. I had a GB assessment in December, but my dream has always been to become a professional boxer and I have watched pro boxing since I was six years old.

“I did the amateurs to be a professional and when I got this opportunity I took it with both hands,” he added, also revealing that competing in the Olympics did not hold particular appeal.

“No, I could have made the Olympics but people have different goals in life and mine is to be a professional boxer under the lights and hopefully become a world champion one day.”

To that end, McCann is happy to have aligned himself with a Hall of Fame promoter with a track record of steering young prospects towards realising their career goals.

“Frank is known in boxing for taking young fighters from day one and guiding them towards major titles and that was a big factor for me. Another one was my friend and trainer Alan Smith put me towards Frank and I trust the judgement of both of them.”

Frank Warren is thrilled to welcome such a talented new charge to his team.

“Guiding young fighters like Dennis to world title contention and beyond is what I enjoy most in this business and I’ve got genuine hopes for Dennis, who did incredibly well as an amateur and has attracted a lot of interest within the professional ranks,” commented the promoter.

“He is in a great gym over in Bromley and I’ve got every confidence that Alan Smith – who does a terrific job with his fighters – is the right man to get the best out of him and bring about huge improvements as we go along.

“Dennis is a fantastic addition to our hugely talented crop of young fighters and I look forward to him beginning his journey with us and keeping him busy as he gathers the experience, he needs to make big strides in the professional game.”