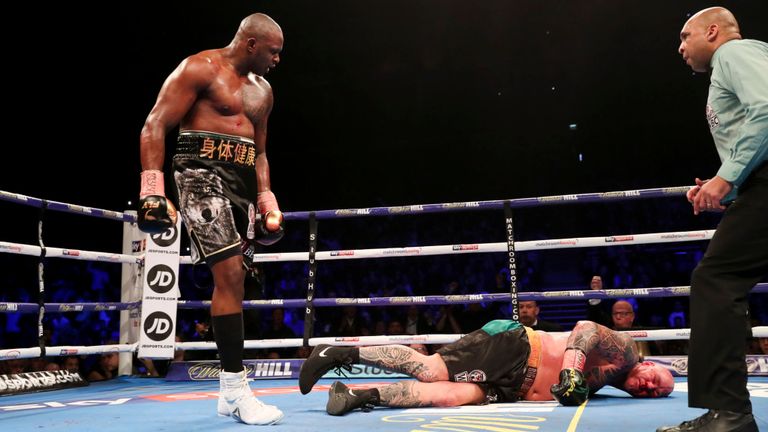 Undefeated cruiserweight Lawrence Okolie has sparked another reaction from Dillian Whyte by admitting he remains happy to enter a heavyweight fight with the body snatcher in the nearby future.

The 26-year-old from Hackney faces Wadi Camacho, with the British and Commonwealth titles on the line at the Copper Box Arena on Saturday, on the undercard of Charlie Edwards WBC world title flyweight defence against Angel Moreno.

But Okolie recently announced via social media that he could have the beating of Whyte before posting brief footage of a former sparring session.

Speaking on events Okolie has been quoted as saying “My aim wasn’t ever to cause a stir with that, it was just a lot of people talk about me in the media and on their platforms.

“When there are fighters who are below me, or coaches, or people that I won’t engage, but Dillian Whyte spoke about me on the day that I posted. I didn’t like what was said, so that’s his opinion of my boxing, so I made my opinion on him and me boxing.

“In terms of moving up to heavyweight, I believe definitely it’s something that’s going to happen. I always believe in myself and I’ve always set targets and gone and accomplished them. That’s what I’ll say on that.”

After 11 straight victories on the bounce, the former 2016 Olympian intends to move towards world level in his own division, although he is willing to welcome a challenge against Whyte at some point of his career.

“I’m not going to single him out and say I’m gunning for Dillian Whyte,” said Okolie.

“I’m doing my own career, but at the end of the day, I don’t say stuff for no reason. It is what it is. We’ll see how I handle Wadi and we’ll see what I do at cruiserweight, but definitely that’s a fight I would happily take.”

Whyte has given his own account of the sparring sessions with Okolie, warning him to focus instead on a fight with fellow domestic rival Richard Riakporhe, who is managed by the Brixton fighter.

“Look, I don’t have much time for sparring stories,” Whyte told the media. “Sparring is sparring, but Okolie is living on another planet.

“The last boxer to make up a sparring story about me was Chisora and everyone saw how that ended. I only sparred Okolie twice over two days in 2015 and the second time he was very arrogant, so I put a little pressure on him and he folded and had to be helped out of the ring and miss his next fight because of his injuries.

“Instead of trying to get my attention, he should concentrate on the cruiserweight division where he has already twice pulled out of fights against Richard Riakporhe who I 100 per cent believe would knock him out.

“Okolie is a complete hype job. He’s already pulled out of two fights against Richard and that’s before I even managed him. If I fought him, I’d snap him in two like a ‘Twiglet’.

“Okolie and his handful of supporters call themselves ‘Penny Bois’, which is a great name for him as that’s all he’ll earn off boxing, pennies; as he has no real talent, no heart, no chin and nothing about him is likeable.

“If Okolie steps up to heavyweight I would end his career. He is one of the most deluded boxers in the history of boxing. Okolie is a joke, without AJ backing him, he’d still be working in McDonalds.”

0 comments on “SPARKS CONTINUE TO FLY BETWEEN OKOLIE AND WHYTE”