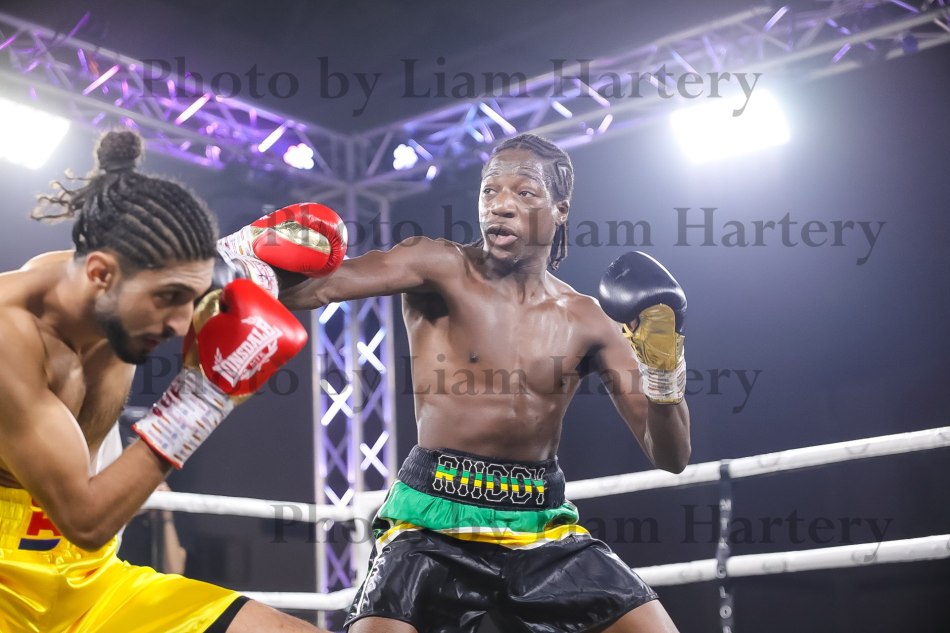 Boxing returned to the Welsh capital on Friday night, showcasing some of the best talent from within its borders that fell on St Davids Day at the Vale arena in Cardiff.

Retaining his IBF European Super-Lightweight title Akeem Ennis Brown (13-0) outpointed Bilal Rehman (12-1) via scores of 99-91. ‘Riiddy’ which he is nicknamed took the title in beating Darragh Foley in December and wasn’t about to yield it at its first defence with Rehman being found wanting on the night’s main event.

Brett Fidoe (13-49-5) came into his contest with Commonwealth Flyweight Champion Jay Harris (15-0) on the back of a four-fight winning streak but wasn’t able to extend that run as the Welsh man successfully outpointed him by a score of 59-57.

Both men had faced each other prior in Harris’ debut, the result the same but found a much more difficult proposition, impressive considering that Fidoe was coming into the contest on 24-hours notice, going further in providing some tough moments throughout. In the end, the pedigree of Harris shone through as he can now concentrate on more pressing issues of being mandatory for the British / European titles.

Middleweight Alex Hughes (13-0) continued his rich vein of knockouts in his one round demolition of Wilmer Gonzalez (19-13-1).

The Maerdy fighter dropped the central American on two occasions with great accuracy of well-placed body shots as the fight was rightly waved off after just 2:04.

It was Hughes’ fourth consecutive knockout victory which goes to prove his decision to drop back down to his old hunting ground was a masterstroke following a brief spell at Super Middleweight.

Gething continues to be value for money for fight fans, once again going to war when the easier option was to box a more cautious fight, that just isn’t in his DNA.

Jacob Lovell (2-0) continued to impress, putting away the challenge of the winless Mohamed Mahmoud (0-10 in the third round.

The 19-Year-old took a while to find his range but when he did, it was game over for Mahmood who succumbed to the flush punching of Lovell.

Robinson came into the contest looking to make a statement, immediately taking the initiative by landing some accurate shots from the southpaw stance which continued in the second.

In the third Phillips started to employ pressure, trying to push Robinson on to the back foot. This worked well in the fourth as a right hand to the top of Robinson’s head put him over for the first time in his career, it was more a case of loss of balance more than it was hurtful but was enough to revitalise Phillip who continued to come forward thereafter. The pair closed out the contest fiercely both believing they had done enough but it was Robinson who continued unbeaten, whilst adding the second loss to Philips’ resume.

Rhys Edwards (4-0) gave us another glimpse of a fighter that is sure to get fight fans off their seats in the years to follow in his stoppage win over Journeyman Elvis Guillen.

Edwards entertained the masses who crammed into the venue, using swift footwork to provide more questions than Guillen was able to answer, mercifully putting a full stop on the performance with a solid right uppercut to end proceedings in the third.

There was wins also for Angelo Dragone (4-0) and Maredudd Thomas (6-0) who respectively remained unblemished.

The ever-improving Dragone didn’t lose a round in handing defeat to Michael Isaac Carrero (13-46-5) showing the learnings of an ever improving fighter, remaining unbeaten in his pursuit for a step up in class.

Possibly one of the best wins on the undercards was scored by Maredudd Thomas who decisioned a known visitor to these shores in Richard Samuels (1-2).

Many of us already were acquainted with the skill of Samuels from his upset win over Ricky Rowlands but this time lightning didn’t strike twice, Thomas remained composed, listening to the advice given from his trainer Gary Lockett, all in all it was enough to secure the decision.

Elsewhere, frustration was felt from David White Jr (2-1-1) who was unable to get another win under his belt, instead having to settle for a draw against the tough Nicaraguan Jose Aguilar (16-55-5).