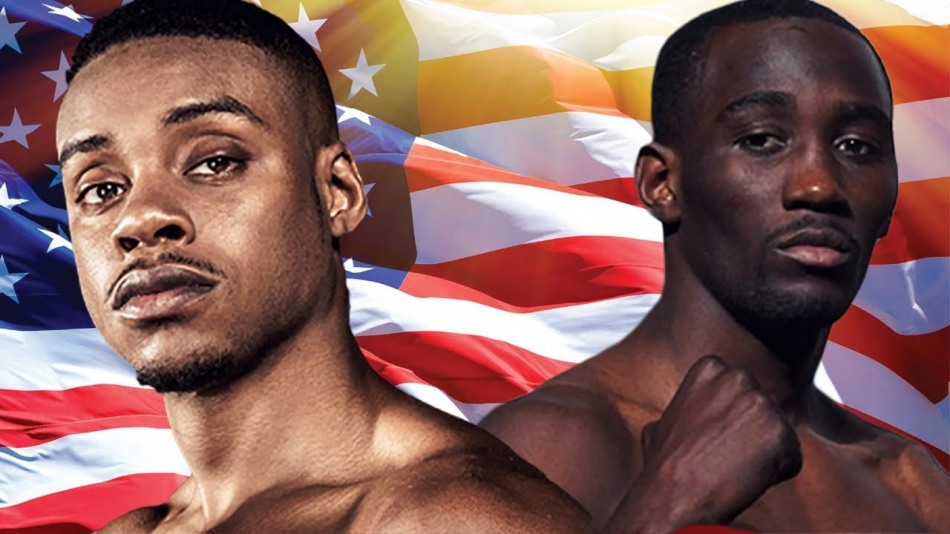 Its the time of year again where we find ourselves on our hands and knees praying to the boxing Gods to give us an offering from the wish list of fights that we have available to us. In an ideal world, each could be made without issue but whether it be promoters, financial and sometimes egos it sadly is never that simple.

This particular article takes away the restraints, trying to look at each fight with an outlook of a glass half full instead of the alternative, here are some of my favourite fights in no particiular order:

The first fight that instantly sprung to mind was, of course, Terence Crawford Vs. Errol Spence Jr which has continued to gather steam since both reached the top of the Welterweight division.

Social media is a wonderful thing to air our grievances which in this case both did at length, eager to prove their standing above the other.

The possibility of the fight happening heightened recently with Bob Arum warming to the fight being made after both men came face to face at the Chesapeake Energy Arena in Oklahoma City on November 16th in Maurice Hooker’s latest defence, both men were jovial but assertive in wanting the fight to happen.

But first, the focus is averted temporarily to Spence’s tricky first obstacle in Mikey Garcia before any talk can be concluded but if successful we could potentially witness this great one in 2019.

This as all the hallmarks of an action-packed, rock em sock em kind of fight, the styles guaranteeing value for money.

Hurd staked his claim as the best 154-Pounder in 2018 by beating Austin Trout as well as a brilliant victory in securing the IBF and WBA titles against Erislandy Lara whilst Jamie Munguia erupted onto the world scene coming in for the late sub Liam Smith on route to the annihilation of Sadam Ali.

Aged 22, Munguia emerged as the next Mexican star having fought five times this past year, he has beaten out top opposition in the aforementioned Ali as well as Britain’s Liam Smith before capping off the productive year with a stoppage win against Brandon Cook

This one shouldn’t be as difficult to bring to fruition as some of the others so let’s just hope nothing happens beforehand to derail any plans.

The triangle of Anthony Joshua, Tyson Fury and Deontay Wilder is one that whichever way you cut it produces a super fight. The fight between Wilder and Fury was one of 2018’s best, further whetting the appetite for more with the heavyweight division waking from his slumber with a serge of talent.

The rematch dare I say it could be better than the first with intrigue aplenty, could Wilder land more with his devastating right hand? Will Fury be even better with another full training camp under his belt?

The bout brought with it such controversy that the rematch is inevitable which is more than can be said of any fight involving Joshua who now looks to be warming to another fight with Dillian Whyte.

Let’s hope that the financial side won’t be detrimental to any fight happening from Joshua side of the table because his inclusion could bring about some great encounters in 2019.

The talent-rich division of Light Heavyweight houses more than a few interesting fights especially since the dethronement and the seemingly fall from grace of Sergey Kovalev meaning a spot to fill at the echelon, step forward Dmitry Bivol and Artur Beterbiev.

Both fighters hail from Russia with one glaringly common denominator of power which doesn’t need me to state, brings excitement by the bucketload. Both fighters continue to win and win impressively creating enough buzz from the fight fans to prompt the promoters to cash in, this will further simmer but is one that could settle the debate of the division’s ruler for the time to come.

Callum Smith finally fulfilled his billing for me in 2018, proving the assumption that he was the best Super Middleweight by winning the World Super Series in destroying George Groves in seven rounds.

A look around the divisional landscape will find a few interesting possibilities in Gilberto Ramirez, Jose Uzcategui or even the winner from James DeGale Vs. Chris Eubank Jr but the one that is most pleasing to me is the one that couples the Liverpudlian with the unbeaten David Benavidez who up to this point as looked sensational, well inside a boxing ring, on the outside things are far more convoluted.

A positive drug test in which Cocaine was found in his system meant that his scheduled fight with Anthony Dirrell had to be cancelled. meaning that Benavidez would be named the champion in recess whilst Dirrell will face Avni Yildirim in February.

I for one am hoping Benavidez can get his act together and fulfil his obvious potential where a match-up with Smith would be one of this year’s great encounters and you can hold me to that prediction.

We all know that victory over Rocky Fielding was a foregone conclusion for Saul ‘Canelo’ Alvarez, it served as a nice introduction to his multi-year, multi-million pound deal with DAZN, so that being said I think we can forgive him especially as we know he is coming off two wars with Gennady Golovkin,but now we would like him to step back into the firing line with a much more meaningful contest.

Dropping back down to his prefered hunting ground of middleweight, Canelo will have a host of possibilities open to him, each one with an element of danger attached.

Those licking their lips in anticipation of a contest would be the usual suspects of Billy Joe Saunders, Gennady Golovkin and the man I would like to get next, Danny Jacobs.

Jacobs gave Golovkin one of his most difficult fights and has since continued to put forth an argument to be considered in a future fight with a decision victory over the potent threat of Sergey Derevyanchenko.

Some may dislike this pick due to it not featuring Gennady Golovkin but this is the one I would like to see happen before we inevitably get the third in the installment of Canelo vs. Golovkin.

These two are on a collision course thanks entirely to the World Boxing Super Series. Both have continued unbeaten with Prograis, 29 beating Julius Indongo, Juan Jose Velasco and last time out Terry Flanagan whilst Taylor matched his efforts with wins over Winson Campos, Victor Postol and Ryan Martin to step into the Semi-final of the Seuerland driven WBSS.

Awaiting the Scot will be the fearsome Ivan Baranchyk so thoughts on him facing Prograis may be a little premature but given what we know and expect in the years to come from the Glaswegian, then I expect his path albeit treacherous will be one made successfully.

Vasyl Lomachenko is one who stands at the top of the food chain as much as Pound 4 Pound rankings are concerned, He may only be thirteen fights into his professional career but that tells a quarter of the story, delve a little deeper will find a fighter who is a three weight world champion having beaten out competition such as Guillermo Rigondeaux, Jorge Linares and Gary Russell Jr amongst others.

So the head-scratcher is not necessarily who could beat him but at the very minimum give him a competitive fight, that in mind, the only name that springs to the forefront of conversation is Mikey Garcia who as you all know is Bob Arum’s favourite person, I joke of course considering it was the Top Rank’s head honcho that sidelined him for so long.

Fight fans are calling for it but a reluctance to do business with Garcia may persuade Arum to look at other alternatives, still, its a fight that we all would love to see, I’m sure I’m not alone in my thinking, regardless of the result of Mikey’s next encounter with Spence Jr.

Originally this was a pick of Inoue vs. Tete but at the last minute, I decided to select Mexican Luis Nery due to its importance.

This may be a difficult one to make due to Nery’s lifetime ban in Japan due to his inability to make weight for his rematch win over Shinsuke Yamanaka which when coupled with the fact he had failed a drugs test following his first encounter with the former Japanese world champion, you can already imagine the outcry from the country for his banishment.

Given this fact and of course that we know Naoya Inoue is the Japanese ace in the pack, this is a fight where they may feel punishment could be handed out for the injustice of his compatriot.

Maybe that’s me reading too much into it as per usual, nonetheless, it is the best fight to make within the division currently.

This was one of the stars of 2018, an all-action fight which went in favour of Rungvisai (47-4-1, 41 KOs) who was able to win rounds early, becoming more vital as the Mexican spurred on by his big fan base rallied late only to miss out on the judge’s scorecards.

Rungvisai shot to fame with back to back wins over the consensus Pound 4 Pound number one Roman ‘Chocolatito’ Gonzalez but was given a far potent threat from Estrada who at the time the final bell rang was none too wiser who should have his hand raised, by the slimmest of margins Rungvisai came out on top by 114-114, 115-113 and a rather quizzical 117-111.

The WBC has already ordered the rematch so this can be etched to the list of fights that will be made instead of the list that we hope will be made.

After winning the title at the tail end of 2017, TopClassBoxing’s featured fighter Danny Roman continued his rich vein of form with another standout 2018.

In defence of his WBA title against Ryo Matsumoto not only did Roman stave off the challenge but did so by going into the challenger’s backyard before coming away with a unanimous points victory. He followed up the win with a decision over Moises Flores before stopping Britains Gavin McDonnell.

A look around the division will find a few interesting propositions but one in particular captures my attention in Mexico’s WBC champion Rey Vargas who is unbeaten at 32-0.

Vargas only faced opposition once in 2018 which was a unanimous decision victory over Azat Hovhannisyan but will want more from 2019. A freakishly tall fighter for the division, standing at 5’8 he makes good use of that advantage, fighting tall behind a never ending workrate.

This fight is a sure-fire winner for the fight fans who will get action by the bucketload from these two combatants which wraps up my picks.