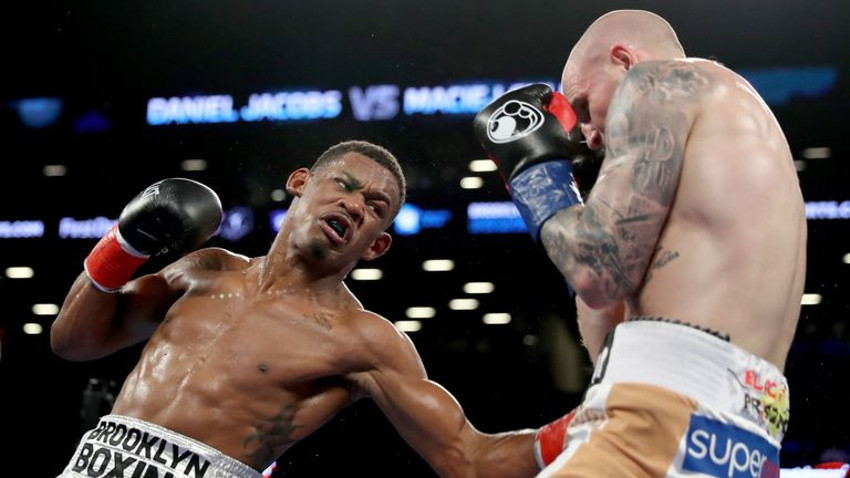 Danny Jacobs booked his place as WBA Mandatory Challenger as he overcame the extremely tough and well schooled Pole, Maciej Sulecki at the fantastic Barclays Centre in Brooklyn, New York.

The fight opened up after a cagey start, and Jacobs realised that he was in a fight early on. His Polish opponent had not come to make up the numbers and started to take the fight to Jacobs early on, with everything coming from behind his excellent jab.

Jacobs landed some heavy shots in the opening half of the fight, and defensively was very evasive, not getting caught with many of Sulecki’s counters when he worked in close. This didn’t stop Sulecki however, as he continued to force the pace and make Jacobs work. Arguably, Sulecki had the better work rate in the first half of the contest.

Round 5 saw the pair go toe to toe in the middle of the ring, with both men landing heavy blows and neither men taking a step back. The fight swayed towards Jacobs in the second half of the fight, who listened excellently to Andre Rozier’s instructions in the corner. He
utilised his excellent jab, speed and footwork to land some quality single shots and combinations. Sulecki continued to press the action with some success, but it was Jacobs gaining control as the fight progressed.

The last 3 rounds were very important, as a late rally from Sulecki could have possibly given him the victory, however, it was Jacobs who came on strong late and really dug in to win what was a very entertaining contest throughout. This culminated with a massive right hand that floored Sulecki in round 12. Sulecki got up and continued to press the fight, which left many in disbelief as it was a hard knockdown.

The 10-8 round was the catalyst to a solid display from Jacobs, who was awarded the unanimous decision victory from the scoring judges. The fight was scored, 116-111, 117-110 and 115-112 in favour of the Brooklyn native, who now is mandatory for Gennady Golovkin’s WBA World Middleweight Crown.

Chief Support saw Heavyweight’s Jarrell ‘Big Baby’ Miller defeat the extremely tough Johann Duhaupas via a unanimous decision. Not the most entertaining of contests this one in honesty, however, Miller showed he could go the 12 round distance at an extremely heavy 304.5 pounds that he weighed in at.

It was a relatively one-sided contest as Miller outworked his French opponent throughout, working well off his jab and putting in some quality bodywork. Not much came back from Duhaupas aside from some brief exchanges on the inside with Miller and some decent jabs when the Frenchman worked on the outside. Duhaupas took some big shots throughout the contest and didn’t seem badly hurt at any point.

The contest was scored 117-111 and 119-109 x2 in favour of Brooklyn’s Jarrell ‘Big Baby’ Miller in what was a perfect reflection on what was a one-sided contest. Miller proceeded to call out Anthony Joshua in the post-fight press conferences and dared the unified World Champion to come to Brooklyn for a Summer Showdown.

This fight was a fantastic advert not just for women’s boxing but for boxing as a whole. Taylor boxed for the first half of the fight, controlling the range and utilising her excellent footwork and jab to keep Bustos at bay.

The second half of the flight turned into an absolute war as the pair traded shots constantly for 5 rounds straight in a thoroughly entertaining bout. It was mostly Taylor who was coming out of the exchanges with the better work, but nothing can be taken away from Bustos who pushed Taylor more than any other fighter had prior to this and would have beaten most other female stars on the night.

The contest was scored 99-91,98-92 and 99-91 all in favour of Ireland’s Katie Taylor who is now the IBF and WBA World Female Lightweight Champion.

‘Kazak Thunder’ Daniyar Yeleussinov looked excellent in his pro debut. The Kazak appeared to have adopted a professional style perfectly as he controlled the range and tempo of the contest perfectly, before loading up with some heavy shots that stopped the previously undefeated Noah Kidd in round number 3.

Yeleussinov looked a complete fighter. He did everything correctly. Whether he is a complete fighter remains to be seen, however, it looks like he could be possibly fast-tracked to titles by Promoter Eddie Hearn.

Uzbekistan puncher Shohjahon Ergashev made easy work of game challenger Zhimin Wang over 10 rounds as the Uzbeki used his far superior boxing skills and ring craft to dismantle his opponent. Ergashev possibly could have pushed for the stoppage, however, it appeared that he was happy to get the rounds in and pick up the WBA International Super Lightweight title in the process. The fight was scored 100-90 x 2 and 99-91 in favour of Uzbekistan’s Ergashev.

The earlier fights saw Brooklyn’s Julian Sosa worked hard for his victory over tough opposition in Larry Ventus. Previously undefeated Irishman Larry Fryers was knocked out in round 6 of their contest by the relatively unknown Nikolay Buzolin and shock of the night came when another previously undefeated prospect Dimash Niyazov was dropped twice in a lopsided defeat to Mexico’s Angel Sarinana.

To conclude the show itself was well matched and involved some excellent fighters. The Barclays Centre is an excellent venue for boxing and Matchroom are showing they are one of the leading promoters in World Boxing, if not the leaders. It would be excellent for the US and World Boxing if Matchroom continued to put on shows stateside
going forward.

0 comments on “JACOBS PASSES THE SULECKI TEST IN BROOKLYN”