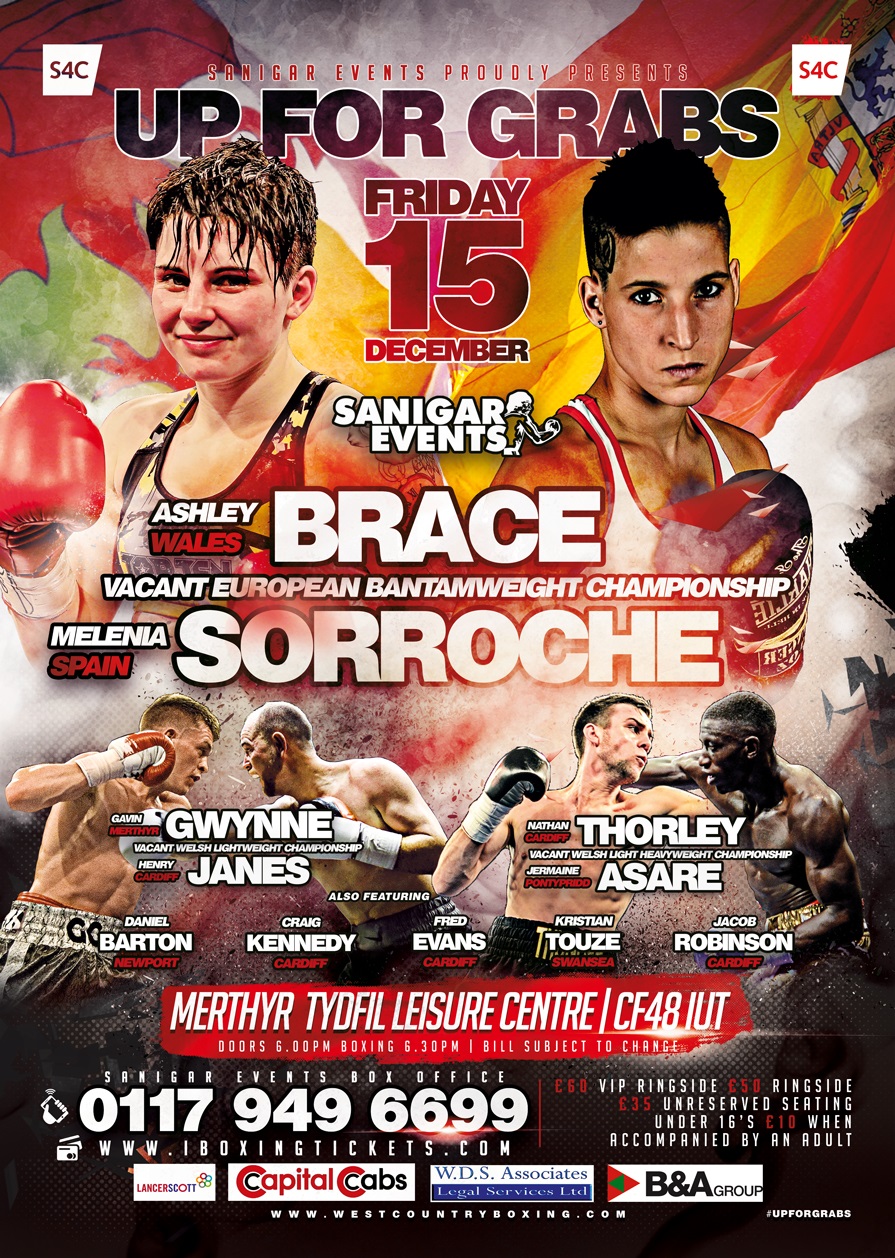 WBC International Female Bantamweight Champion Ashley Brace will challenge Spaniard Melania Sorroche for the vacant European Title at the Merthyr Leisure Centre on Friday December 15th. The contest was initially scheduled for 9th December but has been moved to not clash with Welsh World Champion who defends his title in London that evening.

The event will be broadcast live on S4C headlined by Brace who is undefeated in 7 fights since turning professional in 2015 and has fast tracked her way to the top with several impressive performances, most notably a TKO victory in April over Alexandra Vlajk to claim the WBC International title.

Ashley Brace is delighted to be headlining a historic night for Welsh boxing:

“It is a dream come true for me to fight for such a prestigious title at home in Wales. These are the big fights I crave and I can’t wait to make Welsh boxing history by being the first female fighter to win the European title.”

Sorroche will provide the toughest test of Ashley’s career so far. Her record stands at 13 wins with just 2 defeats and 1 draw and last year she lost a narrow split decision in challenging for the WBA World Title. Capturing the European title would put either boxer in prime position to challenge the WBC World Champion Yazmin Rivas in 2018.

Ashley Brace’s manager Chris Sanigar believes his boxer has what it takes to be victorious:

“Ashley has been training hard at St. Joseph’s Gym in Newport with Tony Borg, she is very lucky to have very high level sparring and I think that will make the difference on the night. We have seen that Ashley has an excellent work rate and hopefully she can break down her opponent and get the win. It will be great for Welsh boxing and female boxing to have a European Champion from South Wales.”

The first of our two Welsh Title fights features undefeated lightweight prospect Gavin Gwynne from Merthyr challenging Cardiff’s Henry Janes for the vacant Welsh Lightweight Championship. Janes is on a strong run of form and has taken the scalps of three undefeated prospects in the past year including fellow Welshman Jason Sillet. Janes’ last contest was a closely fought encounter with ‘Genius’ Joe Murray away from home in Manchester. He has mixed at a much higher level than Gwynne having shared the ring with former World Title challenger Kevin Mitchell and British Champions Martin Lindsay and John Simpson.

16 months after turning professional Gwynne who has won all seven of his professional contests is ready to make a step up in class and believes his time is now. Gavin trains out of the famous St. Joseph’s Gym in Newport under the tutelage of the highly respected Tony Borg and is confident that training alongside such a high pedigree of fighters will help him achieve major professional honours:

The second Welsh Title fight features Cardiff’s Nathan Thorley against Pontypridd’s Jermaine Asare for the vacant Welsh Light Heavyweight title. Both Welshman were standout amateurs for Wales both winning bronze medals at Commonwealth Games, Asare winning in Delhi back in 2010 and Thorley in Glasgow 2014. Thorley has a perfect professional record with eight straight wins with four KO’s. Asare who has secured seven wins out of nine contests is scheduled to box in a four round warm up contest on 16th November in London after suffering a loss last time out to unbeaten prospect Malik ZInad.

The undercard will feature Cardiff’s Craig Kennedy who will be looking to bounce back after an unsuccessful challenge for the British title back in May.  London 2012 Olympic Silver medallist Fred Evans will be looking to secure his third pro win. Undefeated prospects Daniel Barton from Newport and Swansea’s Kristian Touze also feature along with the pro debut of Jacob Robinson the son of former World Champion Steve Robinson.

Promoter Jamie Sanigar is pleased to be back in Merthyr promoting this bumper card;

“This will be a historic night for Welsh boxing and I’m delighted we’ve secured home advantage for Ashley Brace’s challenge for the European Title. This is Ashley’s big chance to win a major title and put herself in prime position to challenge for world honours in 2018. The chief supporting contests will feature two Welsh Championship title fights. The Welsh title certainly brings the best out of Welsh boxers and these two contests will not disappoint. Its a major boost for Welsh Boxing to have secured free to air national TV on S4C.”