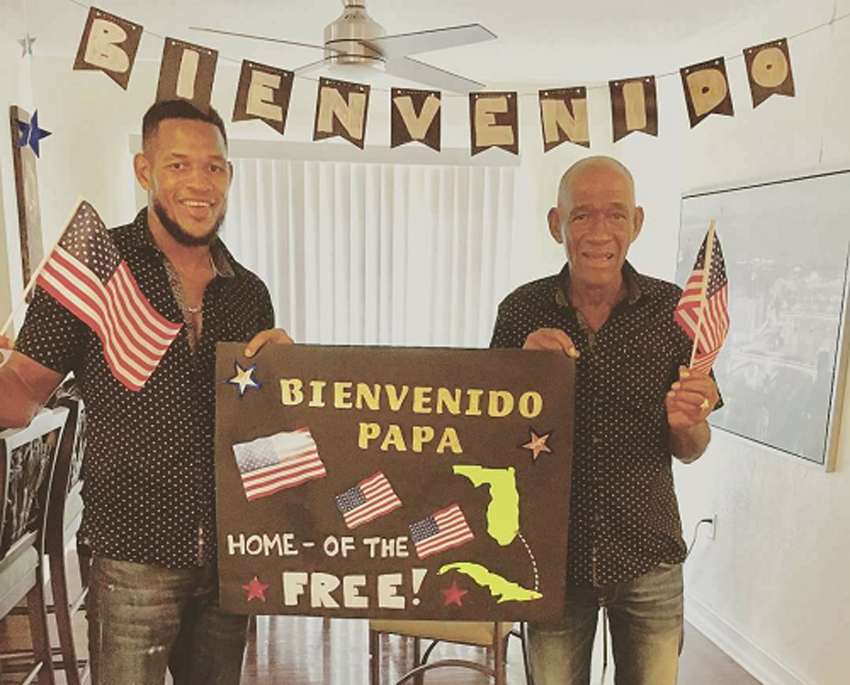 Miami, FL: It has been more than eight years since Sullivan Barrera (19-1, 14 KOs) defected from Cuba and left his friends and family behind to pursue his dream of becoming a professional boxer in the United States. On Saturday, July 15 he takes on Long Island, New York native Joe Smith Jr. (23-1, 19 KOs) for the WBA International Light Heavyweight Title and, for the first time in Sullivan’s life, his father, Rafael Barrera, will be watching him from ringside.

After an eight-year separation, father and son were reunited on Thursday when the elder Barrera was finally able to visit from Cuba. In Cuba, it is difficult for Sullivan’s father to watch him fight. On some rare occasions, Rafael is able to travel to one of Cuba’s larger hotel chains to watch his son fight live on television. Usually, though, Sullivan has to ship videos of his fights to Cuba for his father to see them.

The 35-year old from Guantanamo Bay, Cuba is elated to finally have his father here in the United States for his fight with Smith. When asked about the reunion, Sullivan said,

“It has been eight years since I have seen my father. It is very important for me that he is here for this fight, for my mind and for everything. I want to get for him the victory. I am very excited.”

Understandably, the anticipation of his father’s visit has been a bit of a distraction for Sullivan. According to his trainer, Derik Santos, “I think it is just human nature. Sullivan always says he is out there to do his job, but there has to be an added layer of anxiety with his father being there the first time. You would have to expect that. He hasn’t seen his father in eight plus years. We trained this morning and we spoke about it. There was a kid-like giddiness about him. He can’t stop smiling about it. He is very excited, but it is my job to keep those emotions in check on fight night.”

Despite the added anxiety and anticipation of his father’s arrival, Barrera and Santos agree that they will be ready for Smith on July 15. They are fueled by Barrera being the underdog in this matchup. “I like the status of being the underdog. It motivates me to continue to prove to people that I belong at the top,” said Sullivan. “This is going to be a very interesting fight and it is a great fight for my career. When I come out victorious, it should either give me a shot at the title or get me one step closer to fighting for a title. Smith beat a legend in Bernard Hopkins, but Hopkins had been out of the ring for a long time before their fight. July 15, I am going to come out victorious.”

0 comments on “SULLIVAN BARRERA REUNITES WITH HIS FATHER FOR JOE SMITH JR.”