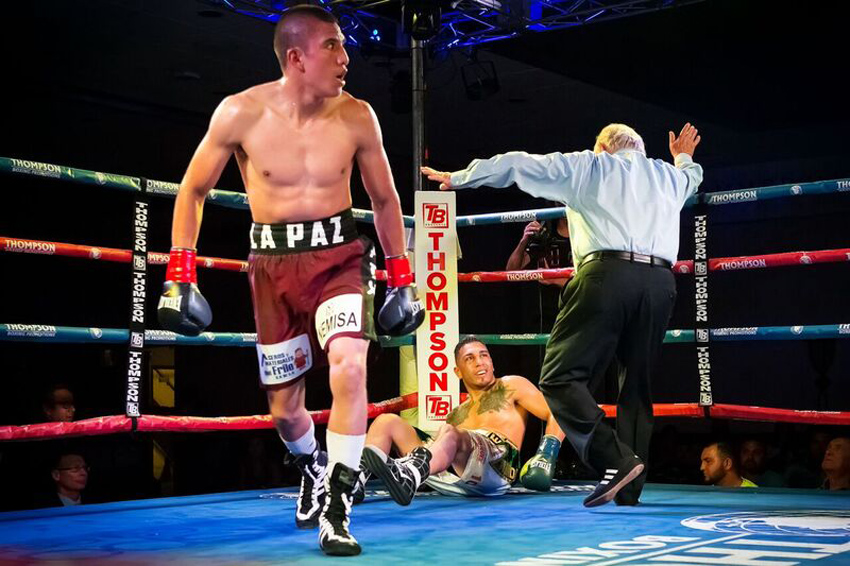 By Barbara Pinnella – This past Friday night, Thompson Boxing Promotions brought us Path to Glory, held at the Doubletree Hotel in Ontario, CA. The main event featured Manuel Mendez (15-2-2, 11 KOs) going up against Mohamed Rodriguez (10-4, 4 KOs). This fight was slated to go eight rounds, and was in the junior welterweight division.

Both men came out swinging for the fences in the opening round. Rodriguez just blasted out of his corner and never backed down. Mendez was also making a point in an active first round. Mohamed used the same game plan in the second round, and it worked. Nobody told him that he wasn’t supposed to be the winner in this match-up. He was really able to keep Manuel’s point scoring to a minimum.

A barrage of punches early in the third put Mendez down, but he got up at the eight. He seemed to get a bit mad after that and was able to land a few hard shots, but right before the bell it was Mohamed who was back to landing. In the opening seconds of round four, Rodriguez just went ballistic on Manuel, and levelled him. As Mendez was hitting the canvas the referee was already beginning to wave the fight off. The final time was :54 seconds of the fourth round.

The reaction from Mohamed was priceless, as he dove to the canvas himself, cheered, jumped up again, and bounced up and down. Yep, he was one happy fighter, and rightfully so. He came to win tonight, and win he did, convincingly!

In the co-main event, we saw Jessie Roman (22-3, 11 KOs) facing off with Erick Martinez (13-8-1, 7 KOs). This fight was for junior welterweight and was to go a scheduled eight rounds. We saw some great body work by Roman in the opening round, as he successfully threw combinations to both sides of Martinez’ ribs.

Jessie continued to punish Erick with shots to the body, and then when Martinez protected those ribs, he got hit in the head. Roman was showing a lot of poise in these early rounds. The third round was more of the same for Jessie. He was in complete control of the fight thus far.

Fourth round, and again, all Jessie. He was hitting Martinez at will, and wherever he wanted. So much so, that Erick’s corner decided their fighter could not come out for the fifth round. Roman took Erick to school, as he absolutely dominated this fight in what almost seemed like an exhibition.

Featherweights took to the ring when Rafael Rivera (25-0-2, 16 KOs) matched wits with Ruben Tamayo (24-10-4, 16 KOs). This fight was scheduled for eight. The first round was uneventful, with neither fighter really wanting to jump in there and commit early in this eight-rounder.

The pace picked up considerably in the second, with both men now willing to throw. Each of them were able to connect as well, and now we had a fight. Immediately before the bell Tamayo hit the canvas thanks to a huge body shot delivered by Rivera, and stayed there. The fight was over at 2:58 seconds of the third round. Rivera moved up to 25-0.

The talented Michael Dutchover (5-0, 4 KOs) had his toughest test of his professional career when he took on Miguel Carrizoza (10-2, 2 KOs) in a fight scheduled for six rounds in the super featherweight division. Carrizoza seemed to have an edge in the opening minute of the first round, but then Dutchover caught his stride and appeared to figure Miguel out.

The second round saw both men really getting in some great shots in a back and forth three minutes. Michael was really strong in the third round and landed the majority of his punches. This was a good round for him. The fourth was more like the second, with both fighters landing leather on the other.

What a good fight we were watching. The fifth round was a very good one for Carrizoza, so both men were giving each of their respective fans moments to cheer. The sixth and final didn’t really provide a clear-cut winner for the spectators, and we went to the scorecards. The judges saw the fight 60-54, 59-55, and 58-56, all for Dutchover. Michael remained undefeated.

We saw two bantamweights, as Saul Sanchez (3-0, 2 KO) faced off against Cristian Bartolini (2-4, 2 KOs) in a fight scheduled for four rounds. A low blow was called on Sanchez, and Bartolini had to really shake it off. But a really hard right/left combination by Saul put an end to Cristian’s night. The fight was waved off at 1:20 of the very first round.

To start us off, heavyweights stepped in, and make no mistake, these were big boys. Sergey Kuzmin (12-1, 8 KOs) weighed in at 244 pounds, while his opponent Malcolm Tann (24-5, 13 KOs) tipped the scale at 235 pounds. The fight was scheduled for eight rounds.

It didn’t take long for dominance to be displayed, and it was by Kuzmin. A left/right combination dropped Tann. Shortly after that, Sergey set him up again with another left, and then a hard right put Malcolm down again. As soon as he got up at the count of eight the bell rang to end the first round.

Both fighters were taking some punishment in the second round when a big overhand right by Sergey found its way home and put Tann on the canvas for the third time in the fight. Malcolm got up again and the fight continued on into the third round.

The third round was uneventful by knockdown standards. Both fighters were finding their targets and taking the punches. We went into the fourth, but this round did not last very long. A quick little combination by Kuzmin put Tann down and out. The fight was stopped at 1:19 of that fourth round.

This was a really good night of fights – no stinkers in here. All the men fought their hearts out and there were some nice little surprises for us as well. Kudos to all the fighters tonight for their efforts.

All Photos Courtesy of Andrea Kaus 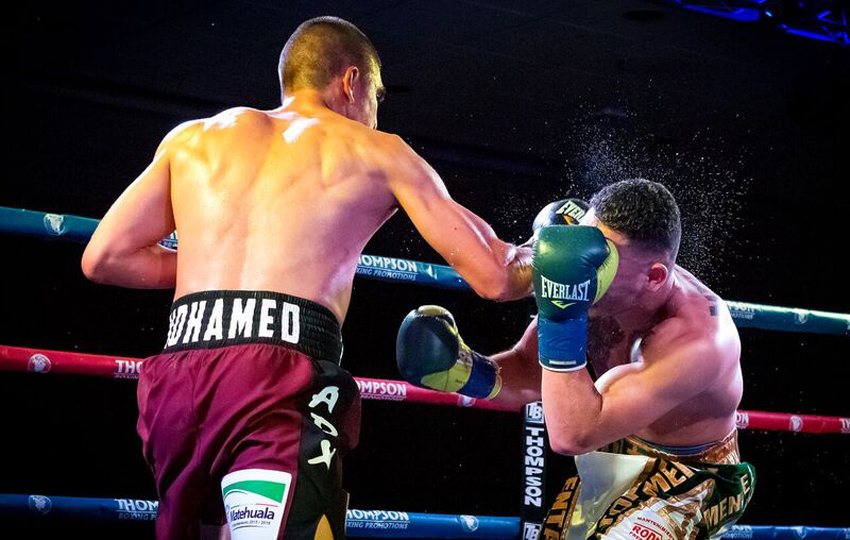