“The Storm” descended on Ebbw Vale Leisure Centre on Saturday night in the latest Sainger Promotional offering, bringing with it unrelenting pressure and wave after wave of attacks from the new WBC International Bantamweight champion Ashley Brace (6-0, 3 KO’s) who secured a ninth-round stoppage over her game but outgunned opponent Alexandra Vlajk (11-5, 2 KO’s).

Frank Warren admittedly was unsure of his feelings about women boxing but after Eddie Hearn / Matchroom jumped the gun in signing Olympic Gold Medalist and 5 x World Amateur Champion Katie Taylor, Warren put aside his old-fashioned views acting fast to secure the signature of double Olympic gold medalist Nicola Adams, both extremely talented fighters but it may be a Bristol promotional team Saniger that may end up holding the ace in the pack in the 26 Year Old Ashley Brace.

Under the radar, she trains in the hotbed of Welsh boxing talent in Newport alongside the likes of IBF Featherweight champion Lee Selby, British Champion Andrew Selby, European Champion Craig Evans and newly crowned Commonwealth Champion Robbie Turley amongst others.

Ashley Brace from start to finish dazzled, applying pressure which former MMA fighter Vlajk simply had no answer to. Brace who goes by the nickname of “Storm” had the visitor wishing she had brought an umbrella, raining down shots whilst keeping a tempo to the contest which her opponent couldn’t match.

37 Year old Vlajk to her credit tried to use her years of experience to try to gain an edge but Youth prevailed, as the old saying goes “Pressure bursts Pipes” as the Hungarian wilted from another of Brace’s combinations allowing referee Ian John-Lewis to step between the two ladies to bring a premature end to proceedings much to the satisfaction of her legion of fans.

The occasion couldn’t have been sweeter for Brace who will go down in history as the first Welsh woman title holder, always able to reflect back on winning the title in her hometown of Ebbw Vale.

Talk of a future fight with Nicola Adams once more came to the forefront enhanced further from a great performance but Brace staying grounded said “‘I wouldn’t fight her (Nicola Adams) yet. I have a long way to go and so does she. When we fight, it will be a big fight.”

In the night’s undercard, Super Welterweight Tony Dixon (10-1, 3 KO’s) made his second visit to a boxing ring in under a month, following on from his quick stoppage of Mike Jones with the scalp of former Olympian Serge Ambomo (5-3, 3 KO’s) in an all-action affair.

Dixon may have had fleeting thoughts of another early finish as he dropped the Cameroonian early in the contest, although it served only as a wake-up call to ramp up the action further as both men give those in attendance their monies worth with toe to toe action,

Ambomo pushed to win rounds that could render the knockdown redundant but was met with a stubbornness in the Aberdare fighter which he was unable to dent. Dixon employed a jab late in the contest which stunted the attacks of Ambomo to take a score of 58-56 from referee Reece Carter.

Dixon put his sole defeat to Paddy Gallagher firmly in his rear view mirror, looking much improved in positioning himself neatly for another shot at domestic titles.

Fan Favourite Kristian Touze (2-0-1) took time away from his media duties to take on the always tough Dean Evans (5-13-2, 4 KO’s) in a great contest which referee Martin Williams was unable to score in favour of either man.

Since his win over Adam Banniser in Merthyr Tydfil, Swansea Lightweight Touze as been here there and everywhere, appearing on the front of numerous front pages of local news rags as well as having a spot on primetime Tv for his charity work.

Touze wasn’t offering any such charity to Evans, boxing beautifully in the contests opener, using an array of angles to push home the divide in skill between the two men. Evans crudely looked to close the gap to make the contest into an ugly affair which Touze was guilty of complying to in the later stages of the bout but showed another dimension of his arsenal as he walked Evans onto shots albeit not enough to take the spoils on the night. (TopClassBoxing had Touze winning the contest by a point)

It was a case of Deju Vu for 2010 Commonwealth Bronze Medallist Jermaine Asare (7-1, 1 KO’s) who once again came up against a familiar foe in Chris Nixon (8-9, 2 KO’s), same fighter, same result as the Darren Wilson trained Asare had his hand raised like he did in 2013 by decision.

The hulking Asare hit Nixon with everything except the kitchen sink in a dominant display which jilted back the head of Nixon on occasion, but still, the durable 31-Year-Old somehow stayed upright

Nixon provided a decent test in the six rounder, always pushing forward in the hope of reversing the tide which threatened to drown him from the shots shipped from Asare, he would get through with the occasional shot which brought calls from trainer Darren Wilson to box smart, maybe with thoughts turning back to Asare’s knockout at the hands of Eric Mokonzo,

Asare got back to his jab which he would use to lead off with combinations instead of looking for the one big shot to end matters but unfortunately, there was no early finish for either man as the rounds ticked away.

All in All, it was another good display from the Pontypridd resident with talks again turning to a mouth-watering encounter with fellow Commonwealth Medalist Nathan Thorley. 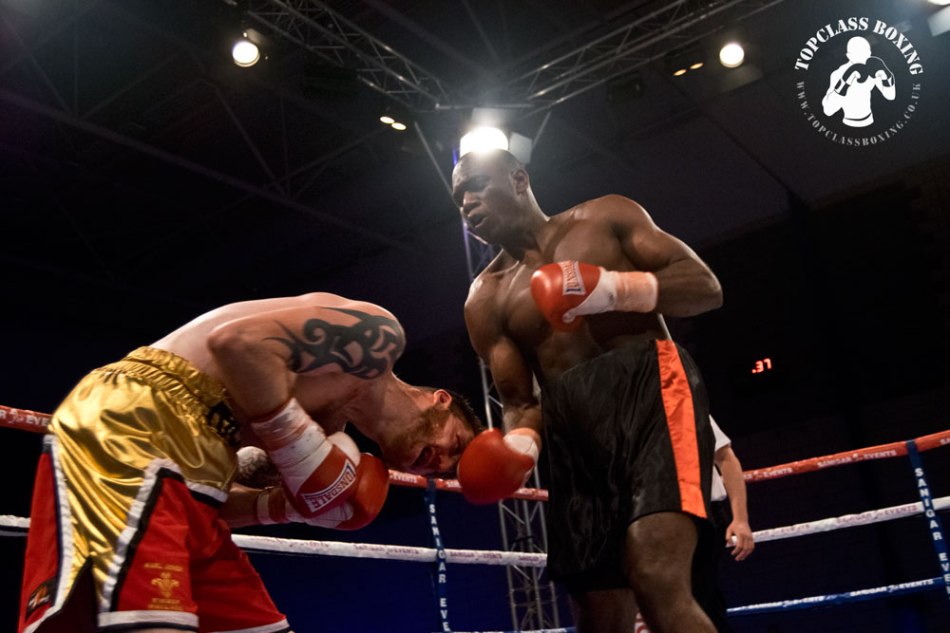 Debutants can often be an unknown quantity in the paid ranks, research of a fighters amateur background will often give an element of knowledge but in the case of Londoner Richard Samuels (1-0) it was one that came with a sting in its tail for Ricky Rowlands (1-1).

Tredegar’s Rowlands looked impressive in his professional debut, starting round one in similar fashion as he dropped Samuels in the first with a hard right hand, looking on from ringside I may have jumped the gun in thinking that was that but amazingly Samuels made it to his feet with the look of a man intent on getting the lost points back.

Samuel’s pushed forward in the second, employing a solid body attack, putting his head on the chest of Rowlands before working away for round after round.

Samuels was now in the ascendancy as he unleashed a sickening right hand which dislodged the mouth guard of Rowlands. Trainer Jamie Arthur pleaded for his fighter to use the jab to gain distance but the body shots were taking their effect, Rowlands looking fatigued enough to hold his feet which in turn gave Samuels the opportunity to land right hands which drew claret from the nose of Rowlands.

Rowlands showed courage in making it to the final bell where he was greeted with a decision loss by a score of 38-37.

Usually accompanied by a Storm, is Thunder, more specifically in this context Nathan “Thunder” Thorley (6-0, 3 KO’s) who detonated a big right hand that dropped, stopped his countryman Jamie Ambler (12-69-2, 3 KO’s) in the second round.

The fight had some bite to it as Ambler tried his roughhousing/veteran tactics to gain an advantage, once tapping the gloves of Thorley before immediately looking for shot whilst Thorley was unprepared. It brought a wry smile to Thorley who recently returned from a vacation in Australia, it was an act which he would later repay in the second.

Ambler would lay on the ropes on occasion looking to entice Thorley onto a counter but the 2014 Bronze Medalist was wise to the action, using a jab which set up a measured right hand which upon impact dropped Ambler hard, he did finally manage to find his feet but was noticeably unsteady as the referee waved off the contest.

The contest provided the perfect platform for Thorley’s May 26th contest at the Motorpoint Arena in Cardiff.

JJ Evans (5-0) is a cause for optimism as far as the future of Welsh boxing is concerned, The 21-Year-Old was put in another testing contest, following on from his win over one of the Uk’s most recognisable in William Warburton to another crafty journeyman, this time in the always entertaining Kevin McCauley (13-140-11)..

Evans looked dejected after his win over Warburton, setting such high standards for himself can become a burden so upon his arrival at Ebbw Vale’s leisure centre he set out to put the record straight by making a statement.

Evans began with a solid jab from the southpaw stance as the marauding McCauley threw wildly in the hope of hitting something except fresh air. Evans kept composed throughout which was a feat in itself as the visitor mocked the multiple Welsh champion.

McCauley tapped his chin, dropped his hands to his side in the hope of bringing Evans into a dog fight but found a continuous stream of heavy leather as Evans rattled off hard body shots before mixing in a solid uppercut much to the pleasure of his onlooking public.

On the conclusion of the contest, McCauley smiled back at Evans probably in the knowledge that he had shared the ring with a fighter destined for a bright future.

In the night’s opener, Gavin “Double G” Gwynne (5-0, 1 KO’s) took his unbeaten record to 5-0 with the scalp of Adam Bannister (0-2) in a rather routine decision victory. Gwynne whose stock continues to rise was in control for the duration using a long accurate jab to offset Bannister before closing the first with an uppercut which was the first meaningful shot to land.

Bannister who many will know as Kristian Touze’s dance partner in Merthyr Tydfil looked game throughout as he came forward, trying to land something substantial but often left punching shadows. Gwynne wasn’t as active as we have known him to be in previous fights which was a sentiment shared by Chris Saniger who shouted from ringside for him to up his work rate and use his jab more.

The trend continued, Banniser coming forward whilst Gwynne threw and circled. As the rounds wore on, Gwynne did, however, start to use his hooks to the body which noticeably had an effect on Bannister who grimaced from the action. Gwynne upped the action a little in the closing round but was made to go the distance as referee Reece Carter rendered his scorecard a shutout of 40-36.