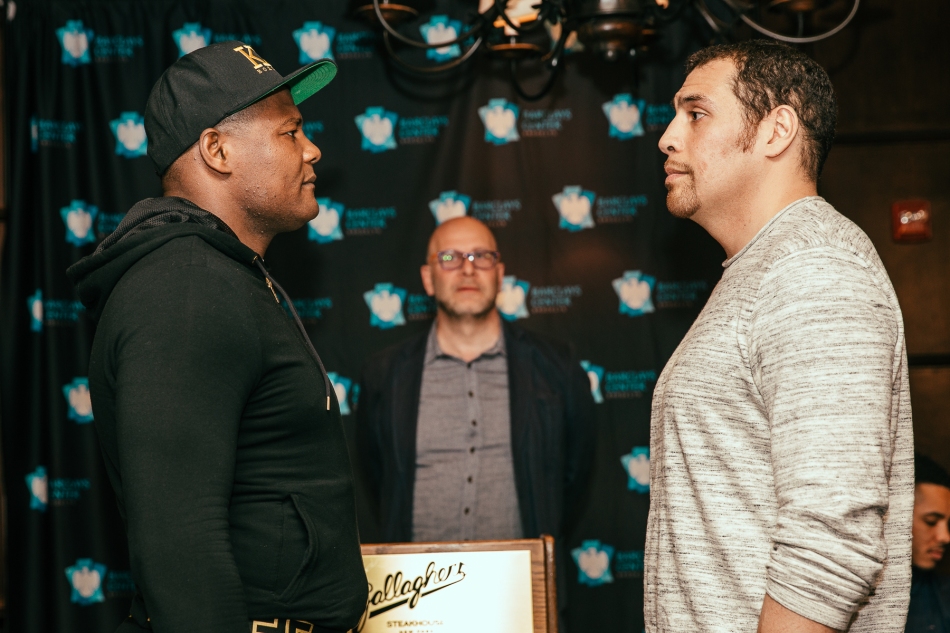 BROOKLYN (March 30, 2017) – Unbeaten heavyweight contender Luis “The Real King Kong” Ortiz (27-0, 23 KOs) will return to the ring to take on Long Island’s Derric Rossy (31-12, 15 KOs) in a 10-round showdown Saturday, April 22 in a Premier Boxing Champions event live from Barclays Center, the home of BROOKLYN BOXING™.

Also competing in undercard action is four-division world champion Amanda “Real Deal” Serrano (31-1-1, 23 KOs) who will look to make history by becoming the first woman and the first Puerto Rican fighter to win a fifth world title in five different weight classes. Both the Ortiz vs. Rossy and Serrano bouts were announced at a press conference in New York City on Thursday.

SHOWTIME Boxing coverage of the Ortiz vs. Rossy and Serrano bouts will be announced in the coming days.

Tickets for the live event, which is promoted by DiBella Entertainment, start at $50 (not including applicable fees) and are on sale now. Tickets can be purchased online by visiting http://www.ticketmaster.com, www.barclayscenter.com or by calling 1-800-745-3000. Tickets are also available at the American Express Box Office at Barclays Center. Group discounts are available by calling 844-BKLYN-GP. The Charlo vs. Hatley fight is co-promoted by TGB Promotions and Don King Promotions.

One of the most feared heavyweights in the world, Ortiz has worked his way into the WBA’s mandatory position to fight the winner of the Anthony Joshua-Wladimir Klitschko, who fight for Joshua’s IBF and the vacant WBA Super World Championship. The Cuban-born fighter had previously picked up the interim title in 2015 with a stoppage of Matias Ariel Vidondo and defended the title with a dominant knockout of former title challenger Bryant Jennings later that year. Last year saw Ortiz continue to run through heavyweight contenders as he earned TKO victories over Tony Thompson and David Allen plus a victory over Malik Scott.

Fighting out of Medford, New York, Rossy was a 2004 Golden Gloves champion and a defensive end for Boston College before turning pro in October 2004. Rossy owns victories over Axror Muralimov, Ray Mercer and Carl Drumond in addition to challenges top heavyweights Eddie Chambers, Vyacheslav Glazkov and Bermane Stiverne. This will be the ninth undefeated fighter that Rossy faces in his pro career.

Raised in the Bushwick section of Brooklyn, Serrano gravitated toward boxing from watching her older sister Cindy, also a professional fighter. She picked the sport up quickly, amassing a 9-1 record during a brief amateur career in which she won the New York Golden Gloves title in 2008. The 28-year-old would go on to fight all over the world, seizing her first world title in 2011 when she defeated Kimberly Connor to grab a super featherweight belt. In 2014, she went to Argentina and defeated Maria Elena Maderna to become a world champion at lightweight. Her world title climb continued in 2016 as she stopped Olivia Gerula in the first round to capture her featherweight championship and followed that up with a victory over Alexandra Lazar to add a super bantamweight title to her collection. She most recently put on a show at Barclays Center in January when she defeated two-division champion Yazmin Rivas by unanimous decision.

Here is what the participants had to say Thursday from Gallagher’s Steakhouse in Manhattan: 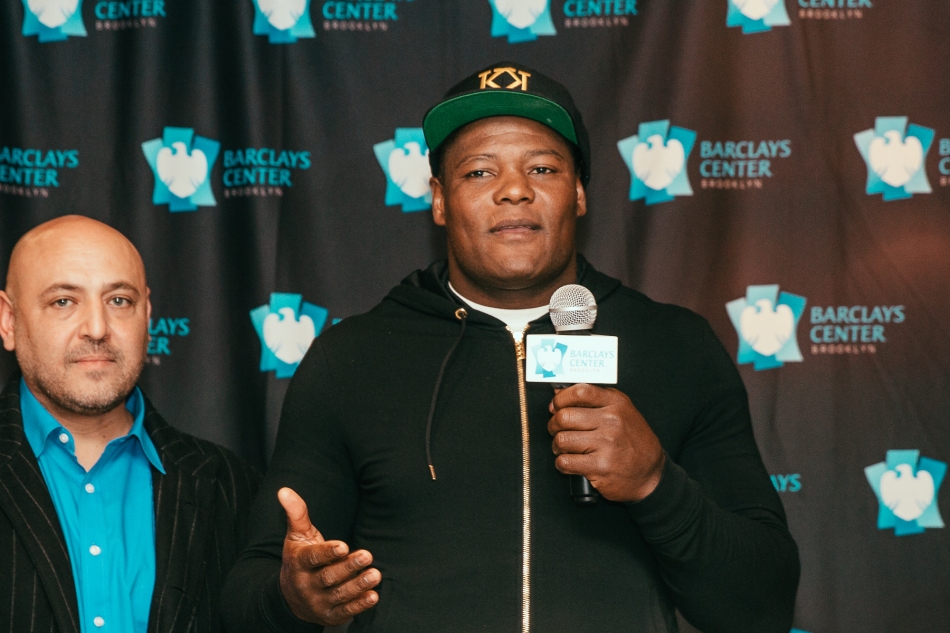 “I’m not a man of many words, but yesterday was my birthday, so with that extra year of experience, I’ll speak a little bit more.

“I’m ready to fight right now. I’m waiting for the opportunity to fight the winner of Anthony Joshua vs. Wladimir Klitschko. They better get ready, because ‘King Kong’ will be waiting for them.

“I work very hard to stay in shape. All year round I am in the gym and staying ready. When the time comes and I have a fight offered, I will always be ready.

“My plan is to become the heavyweight champion of the world. I feel like I’m with the right team now that will open those doors for me. Whoever they put in front of me, I will take care of them.

“I love fighting in New York because there are such smart fans here who really love boxing. They love the knockout and I’m excited to be here to do my job.

“I’ve been working hard and waiting to get a victory on April 22. Once I get past this bout, it’s on to bigger and better things. I’ll find out everything about Rossy that I need to know on April 22 and put on a great show.

“Age is nothing to me. So many fighters have competed into their late age. I still have a lot left in the tank.

“I would love to fight Deontay Wilder. We’re both big, tough fighters. These are the kind of fights that people want to see. I know that my time will come.

“We’re looking forward to this new relationship and this first fight on April 22. I can’t wait to get out there in front of the fans and show my skills. I believe it will finally be time for ‘King Kong’ to come out of the jungle.” 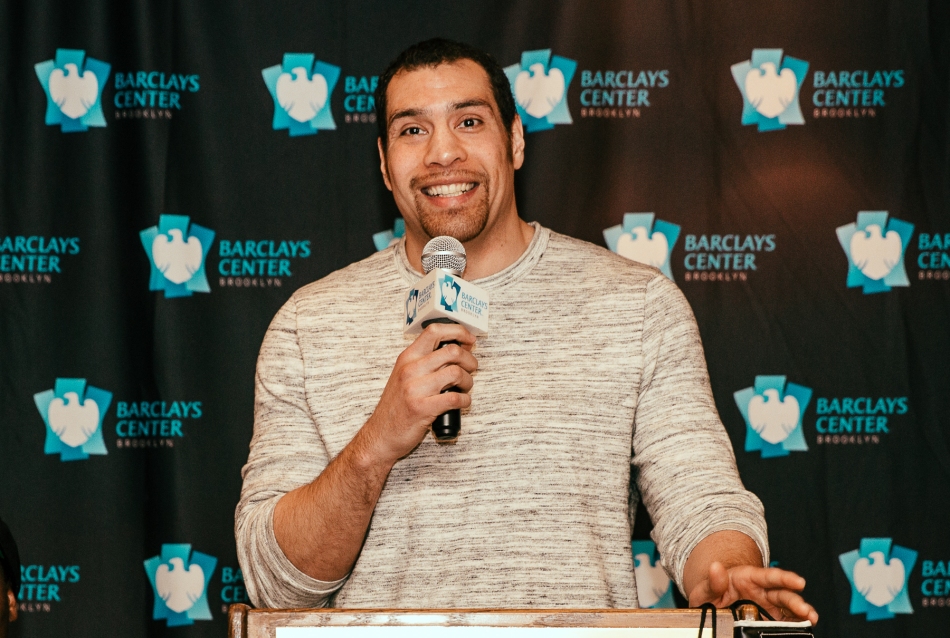 “When they brought the fight to me, I said let’s do it. We’re doing it right by fighting at Barclays Center.

“This is a real fight. I’m always ready. The fans are who pays us and they want to see a legitimate fight. This is going to be a quality matchup on April 22.

“I think our styles will match up well. He throws his hands well and I think I do the same. I sometimes try to be more evasive and I’m anticipating him bringing it. There might be some bull in a China shop, but then it could turn. We both adapt well in the ring.

“You can’t ask for anything better than this kind of fight. We’re both top-notch heavyweights and we’re going to go at it. It’s a thrill for me to be there regardless, but I think the fans are really going to be the winners.

“I’ve fought a lot of really good heavyweights. I won’t know how he stacks up until I get in there with him. All I know is that he’s tough, rugged and good.

“My situation is that I always have to stay ready in the gym. I happened to be ready when the call came and I said yes as soon as I could.

“I’m going to win this fight and it’s going to set up some big things. I’m in this business to get a world title. I have to go through Luis Ortiz to get there.” 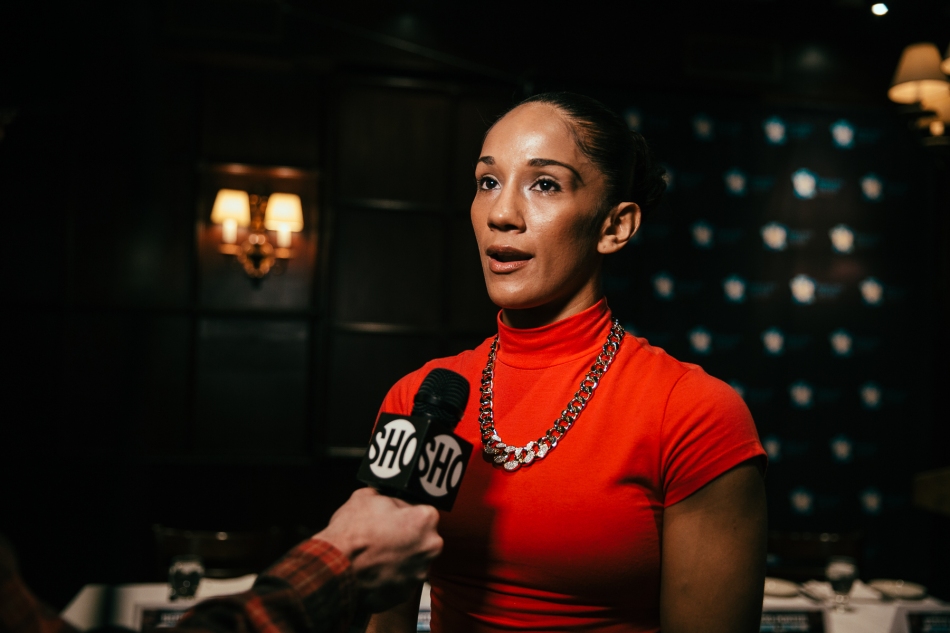 “I can’t wait to get back in the ring and put on a show in front of the fans. That’s what I love to do and it’ll be great to do it at Barclays Center.

“I’m motivated to make history. This would be my sixth world title in five weight divisions. This is a goal that my whole team has had. We want me to be the first Puerto Rican fighter to conquer five divisions. I want to be known as the girl who made history.

“I’m very thankful for everyone who came out here today. This is a great opportunity for me on April 22. I’m going for history. I want this so badly. I train hard and I have a great team taking care of me.

“What better place to make history than at Barclays Center in Brooklyn? No matter who they put in front of me, it’s going to be a night of fireworks. I’m doing this for female boxing. I’m going to show how much talent we have. This is the one that I want more than anything. I always put on a show for my fans in Brooklyn and my eyes are on the prize.” 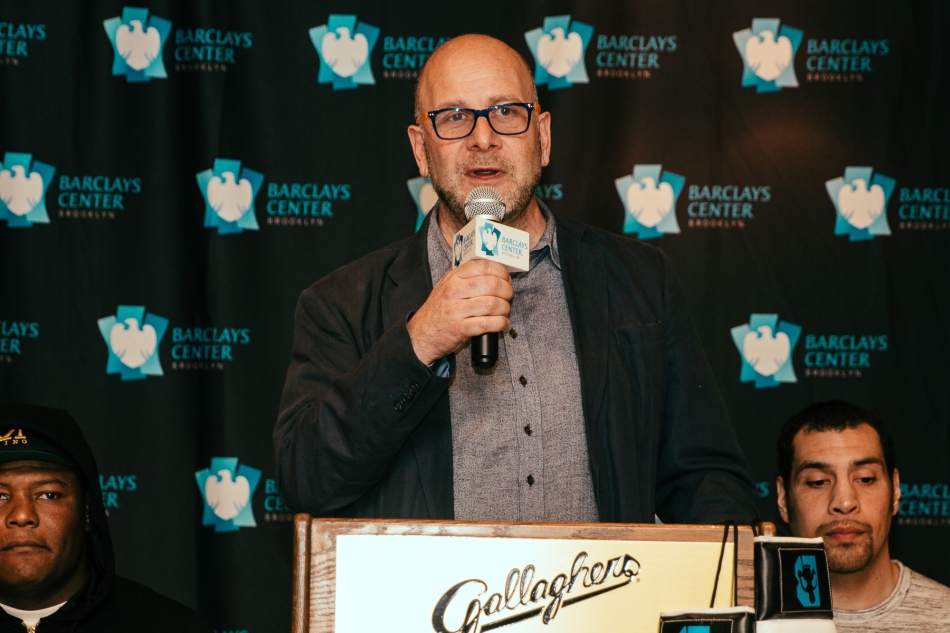 “I’m really happy today to announce some great additions to a terrific card on April 22 in Brooklyn and live on SHOWTIME. Everyone knows the main event is a great fight in the welterweight division. We also announced a 154-pound matchup as the co-main event with Jermell Charlo vs. Charles Hatley.

“The biggest announcement is that a very big man, is going to be on this card. All Luis Ortiz has done as a professional fighter is knock guys out. He’s one of the most feared and avoided men in the heavyweight division. Ortiz and his team want the biggest fights out there. He knows that being seen on a card of this magnitude is a tremendous opportunity.

“I know that Luis Ortiz has a big victory in mind on April 22 that will propel him to a bigger fight and eventually to the biggest fights in the world. This guy deserves the opportunity.

“Amanda Serrano is a great champion. She’s one of the best pound-for-pound female fighters I the world today. No female fighter in history has ever won five titles in five weight classes. But it’s even more amazing, given the long history of the sport on the island, that no Puerto Rican fighter has ever become a five-division world champion. On April 22 Amanda Serrano will attempt to make history.

“Amanda has won titles as heavy as 135-pounds and now she’ll be fighting at 118-pounds. That’s an amazing achievement. She’s always fought the best out there and she’s always proven that she is the best. She deserves the attention she’s getting. She may be the best fighter I promote, period. This woman stands should-to-shoulder with any of them.”

“I know that Derric Rossy is going to give a test to Ortiz. But he’s never been predicted to win. Every time I watch his fight against Bermane Stiverne, I saw him winning the fight. This guy is a real professional and he deserves this opportunity. 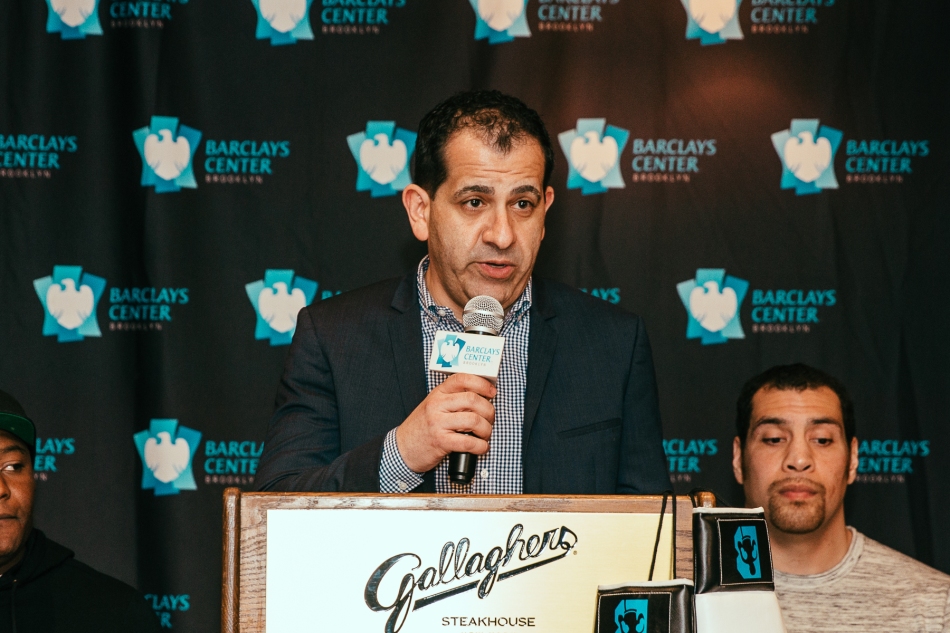 “We’re thrilled to be here announcing such a fantastic undercard from top to bottom. Amanda Serrano is looking to become the first woman and Puerto Rican to win world titles in five weight classes. A card this deep, you know that it is a SHOWTIME card.

“These are the kind of cards that SHOWTIME, Lou DiBella and Barclays Center are working on every day. This was a good event and now it is a great event.”

“It’s been a special start to the year for Brooklyn Boxing. You think about January 14 and March 4 and what great nights those were. Now we have April 22 and it has become a special card. We’re excited about what we’re building in Brooklyn. We’re making great strides.

“I want to welcome Luis Ortiz to Barclays Center for the first time. I’m sure it will be a special night. We’re thrilled to welcome back Amanda Serrano as well for what should be a historic night.

“We’re going to continue to put on the biggest and best events we can. It’s been a great start to the year and we’re looking forward to more to come.” 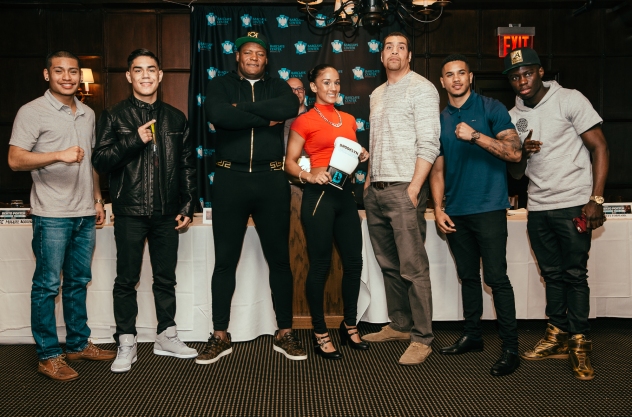 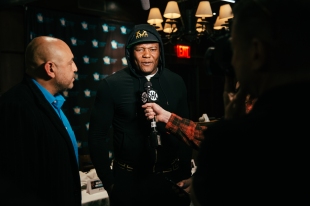 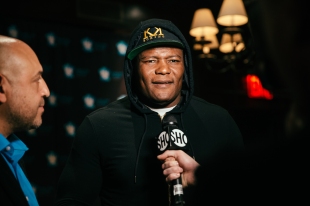 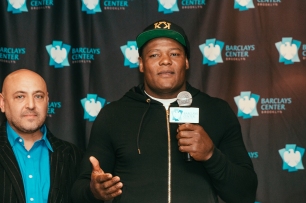 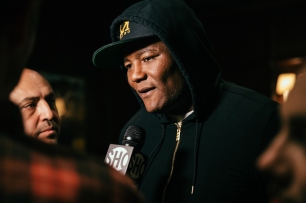 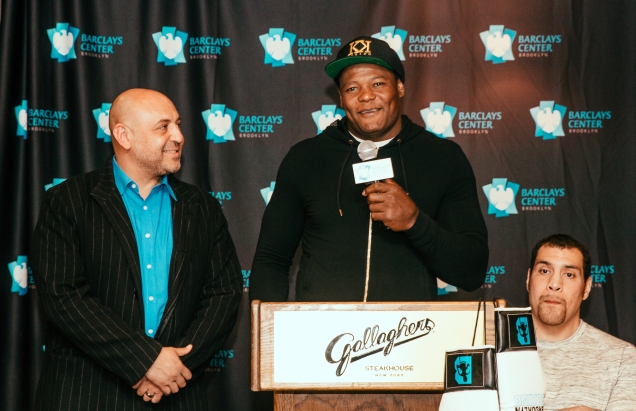 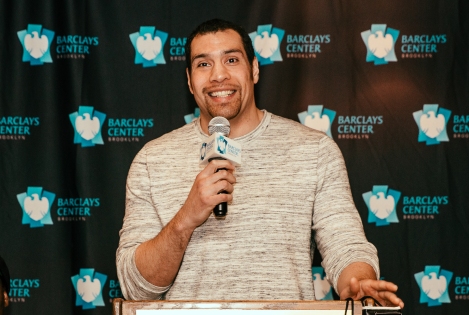 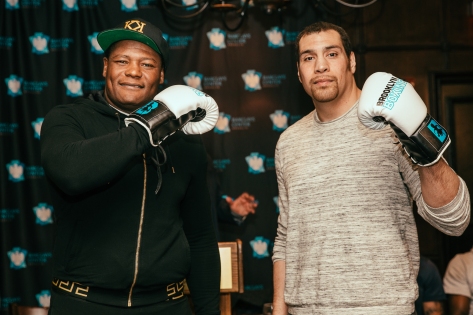 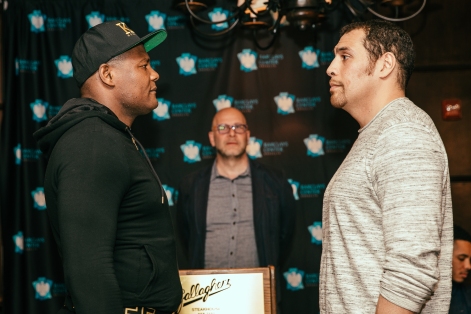 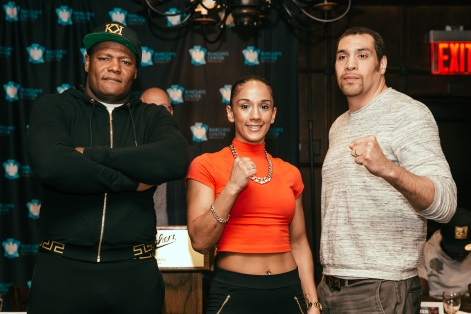 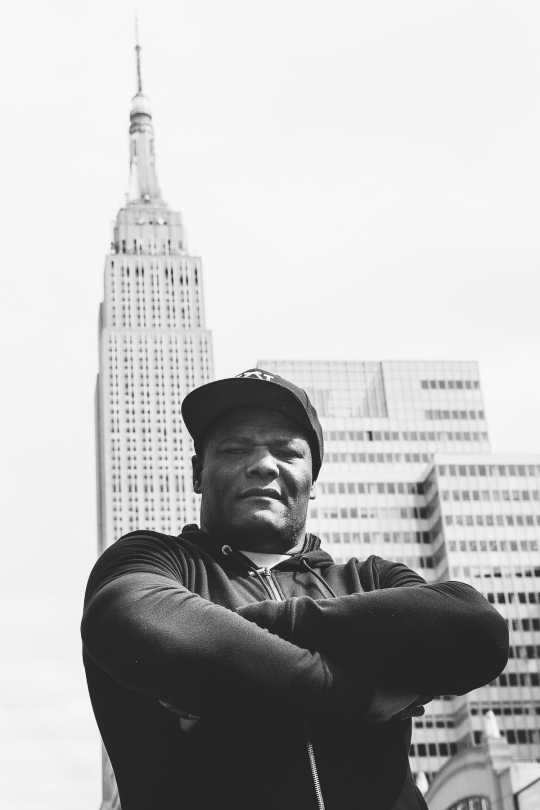 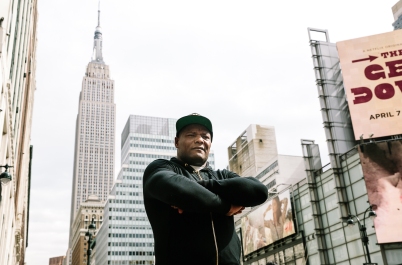 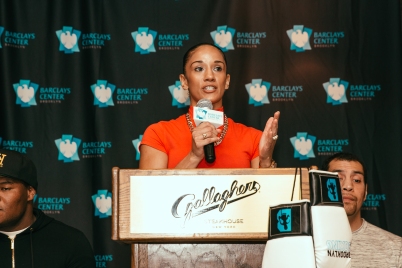 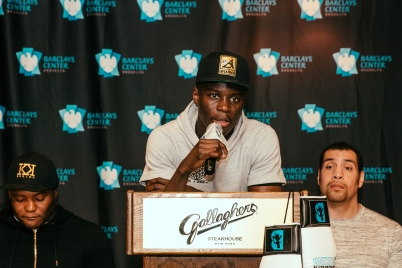 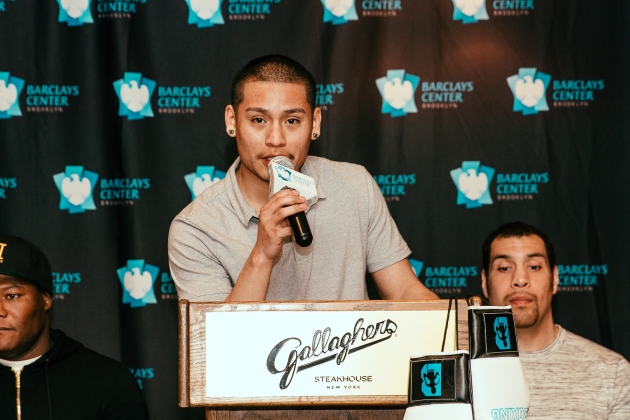 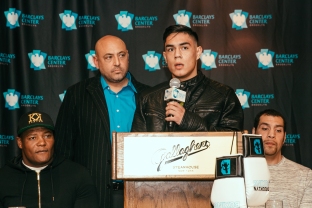 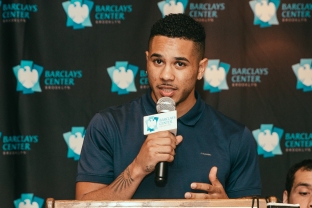 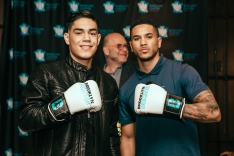 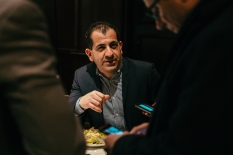 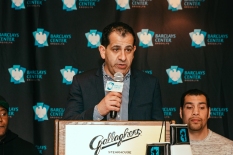 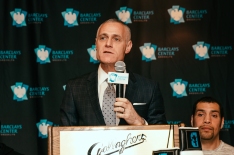